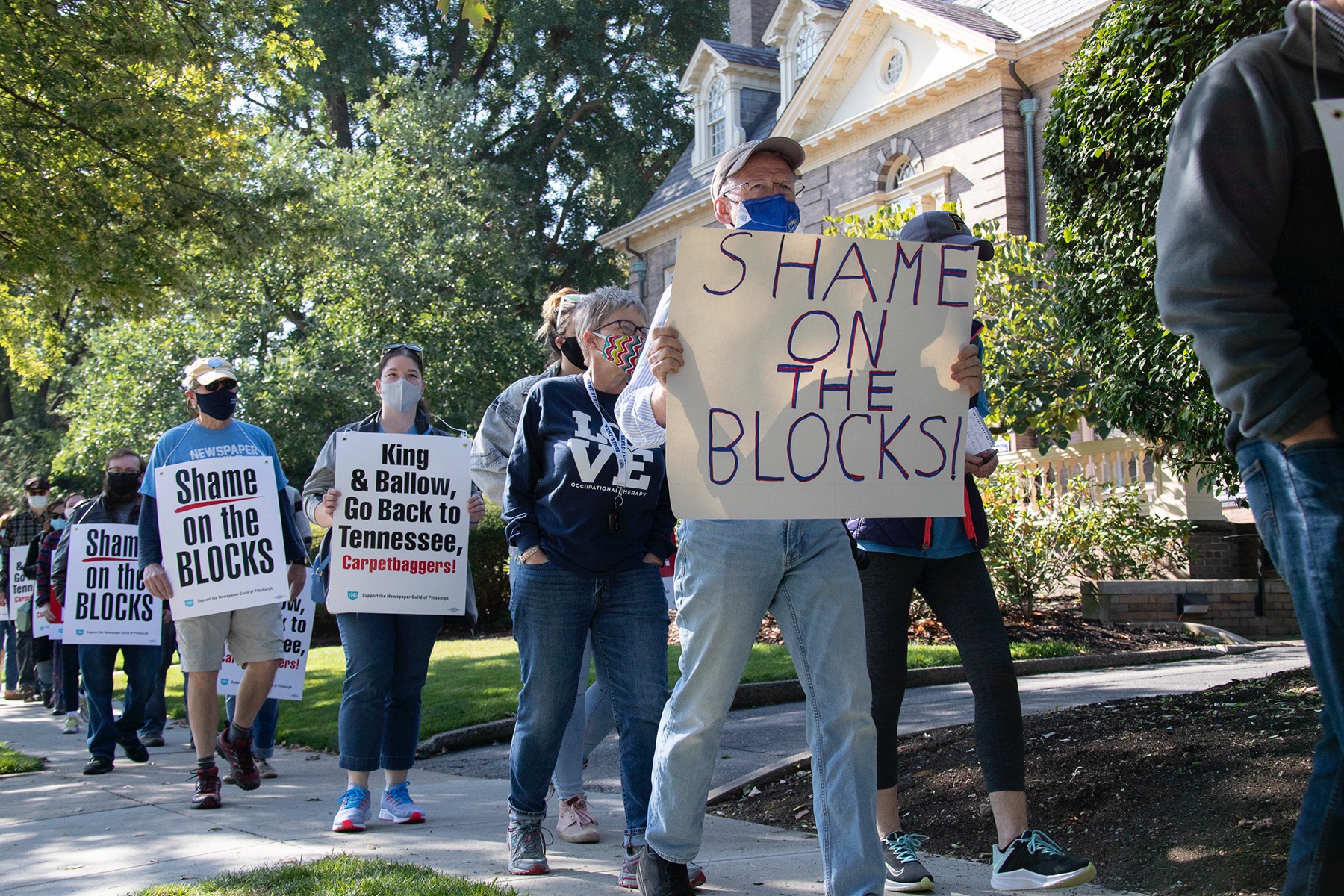 The Pittsburgh and Toledo locals of The NewsGuild-CWA are charging their papers’ owners with manipulating news coverage of Wednesday’s riot at the Capitol to paint President Donald Trump in a positive light and to muddy the waters about who was responsible for the mayhem. The papers, the Pittsburgh Post-Gazette and the Toledo Blade, are owned by brothers John and Allan Block, and endorsed Trump for president in the 2020 election.

Blade Executive Editor Kurt Franck issued an edict to web staff telling them not to refer to rioters in Washington as Trump supporters, “despite the event being Donald Trump-branded, and one the president appeared at and encouraged,” the locals said in a press statement.

Nolan Rosenkrans, a Blade reporter and president the Toledo Newspaper Guild tweeted on Thursday, “There was a systemic effort by management at The Blade to downplay the forces at work yesterday for political purposes.”

Blade newsroom managers inserted the qualifiers “a majority,” “mostly,” and “some” in front of references to Trump supporters in wire copy, wire photos, and a story written by a reporter to give the impression that maybe others were involved too, Rosenkrans said.

“These were not attempts to clarify events. In fact, they were the opposite. They were inappropriate interventions that were done for political purposes,” he said.

Liz Skalka, a politics reporter at the Blade, asked editors to remove her byline from a story about local reaction to the insurrection after they inserted “mostly.”

“I’m not sure how editors in Toledo and Pittsburgh were able to determine better than reporters on the ground who the actors were yesterday in DC,” Skalka tweeted. “I’m sad and disappointed — but not surprised.”

Ashley Murray, a city government reporter at the Pittsburgh Post-Gazette, said, “The Blocks’ meddling in the editorial process and pushing a political agenda further reinforces distrust that the public may have in news media.”

Meanwhile, a top member of the Block family shared an inflammatory post in support of the riot on social media that included a sexist slur against the incoming vice president. The post has been deleted.

These events demonstrate the importance of the union, Rosenkrans said, because “they give us the power to speak out against unethical acts by ownership in a fight for ethical journalism.”

Union members have instituted a “byline strike,” withholding their names from articles, photos and videos, to demonstrate to readers that they are as outraged by management’s actions as the community is.

“These actions follow years of blatant moves by the Blocks to push their political views into the newspapers that the communities of Toledo and Pittsburgh depend on for fair and accurate reporting,” the unions’ press statement says. “In January 2018, The Blade and Post-Gazette co-published the wildly controversial ‘Reason as Racism’ editorial that was called, among other things, ‘a sorry pastiche of whitewashing drivel.’”

During the protests following the murder of George Floyd in May 2020, Post-Gazette management barred a Black reporter, Alexis Johnson, from covering anything related to the protests, citing bias because of a tweet about property damage at a country-music concert. Johnson has filed a discrimination complaint against the paper.

After tweeting support for Johnson, Post-Gazette reporters were also barred by management from covering protests. And on June 5, Post-Gazette management deleted articles by Murray and reporter Lauren Lee from post-gazette.com and replaced them with stripped down copy without bylines.

“The NewsGuild locals that represent the workers of The Blade and Post-Gazette have been the last line of defense for the editorial integrity of the newspapers,” they said. “When the unions saw the wife of Block Communications chairman Allan Block, Susan Allan Block, spread lies and conspiracy theories on social media regarding the presidential election, they couldn’t stay silent.”

“The communities of Toledo and Pittsburgh deserve better.”