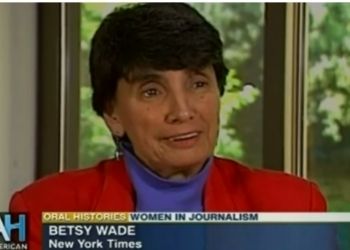 Betsy Wade, a NewsGuild icon, passed away on Thursday. She was 91 years old.

Wade was the first woman president of the NewsGuild of New York, the first woman to edit news copy for the New York Times, and she was the lead plaintiff in a groundbreaking sex discrimination complaint filed against the paper in 1974.

An obituary in the New York Times by Robert D. McFadden reports that she landed at the Times on Oct. 1, 1956, four years after being fired from the New York Herald Tribune for being pregnant. At the Times, she instantly broke a 105-year-old practice of men-only copy editors in the news department.

It was the first of many firsts.

McFadden writes: “She joined a women’s caucus in 1972 to study gender issues at The Times. It found that weekly salaries for women were $59 less than those of men with comparable jobs; that there were no women in top corporate or masthead ranks, on the editorial board or among 22 national correspondents; and that the staffs of 33 foreign correspondents and 35 Washington bureau members included only three women each.”

It was one of the earliest fights in the news business over women’s equality in hiring, promotion, pay and workplace protections under federal anti-discrimination laws, McFadden says.

NewsGuild members across the country are continuing her fight nearly five decades later.

Photo from C-SPAN interview on May 21, 1994, for the Washington Press Club Foundation as part of its oral history project “Women in Journalism.”