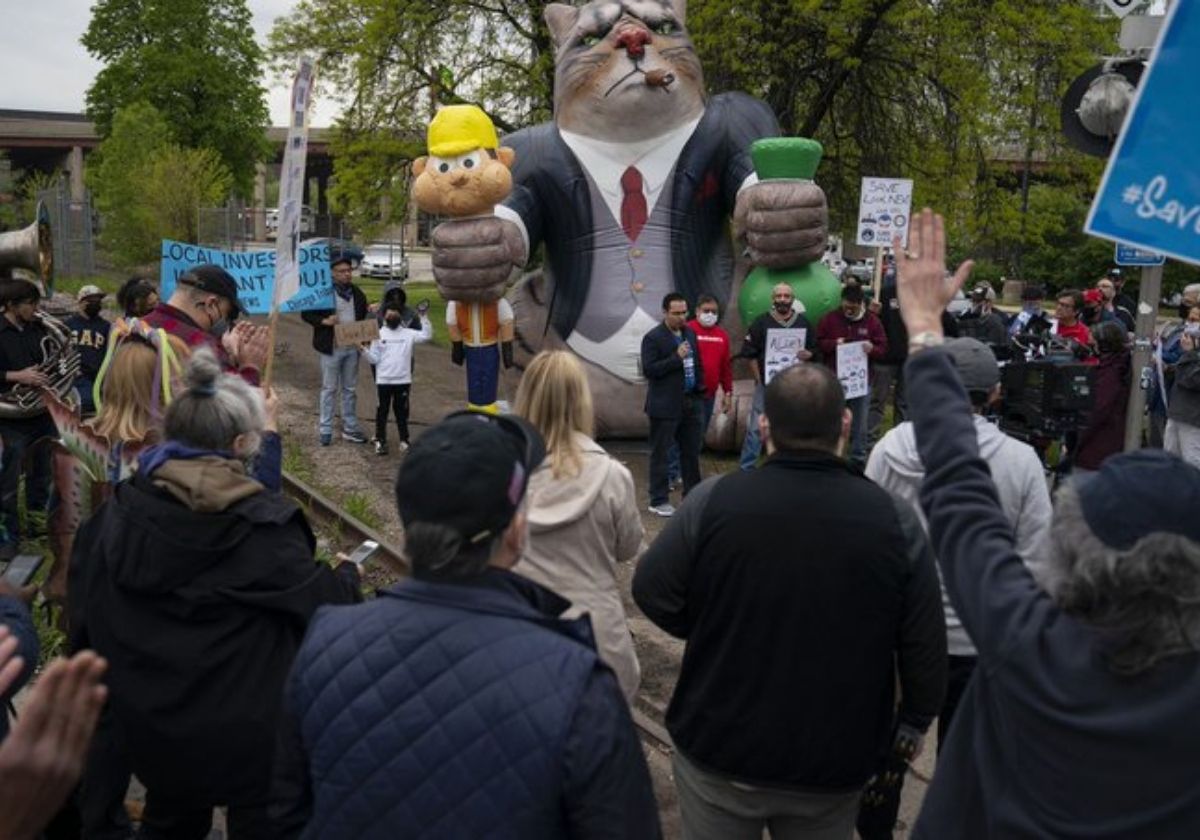 Hundreds of NewsGuild members rallied in Chicago, Orlando, Virginia Beach, Hartford and Annapolis on May 15 in an effort to stop Alden Global Capital’s planned takeover of Tribune Publishing. Tribune shareholders will vote on Alden’s bid to purchase the company on May 21.

Alden, which holds three of the seven seats on Tribune’s board of directors, is notorious for gutting newsrooms and shuttering them altogether.

The rallies featured union members, community leaders, elected officials, readers and allies in the labor movement, all determined to fight for sustainable sources of local news and a non-profit vision for the news industry.

“Doubling down on quality journalism also works,” said Sen. Richard Blumenthal (D – CT) in a speech at the Hartford Rally. “There are places in the country where it has happened. People make money because it’s what consumers want.”

At the national level the Guild has reached out to shareholders to make sure they know why an Alden takeover would be bad for business—and them—as well as for journalists and readers. Guild leaders have talked to business reporters, posted letters to the SEC website, held webinars for shareholders and the media, and created a microsite.

Tribune workers are urging shareholders to reject Alden’s bid in favor of a proposal by Stewart Bainum Jr., a hotel magnate and philanthropist.

Bainum’s bid would pay $18.50, $1.25 more per share than Alden’s. He plans to retain ownership of the Baltimore Sun and several Maryland community papers and seek local, non-profit owners for each of Tribune’s other properties. In addition to the Baltimore Sun, Tribune’s properties include the Chicago Tribune, New York Daily News, Orlando Sentinel, Hartford Courant, Virginian-Pilot, Daily Press in Newport News, Virg., Morning Call in Allentown, Penn, and the Sun Sentinel covering Fort Lauderdale, Fla. Except for the Sun Sentinel, workers at the publications are NewsGuild-CWA members.

“A takeover by Alden Global Capital is a threat to the work that our journalists do for our community,” said Ella Wood of UNITE HERE Local 737 at the rally in Orlando. “Without your work, our stories do not get told.”

State Rep. Anna Eskamani (D-47 FL.) said, “Without a free press, there is no democracy.”

Speaking at the Virginia Beach event, Skip Stiles, executive director of Wetlands Watch, said, “The newspaper is the window into the region. We don’t have enough reporters left. Our region deserves our press, our newspapers.”

Cathy Lewis, host of HearSay on WHRO, said local journalism drives change. It “holds a mirror up” to our community and tells us the stories of who we are, she told the crowd.

Andy Grimm, a business reporter at Tribune’s Chicago competitor, the Chicago Sun-Times, said, “No one in Chicago wants to see the Tribune diminished or destroyed. Shareholders are voting on the future of local news in our city, and their decision will have a profound effect on the quality of life in our city.”

Photo at top: In Chicago, Alden protestors faced down a fat cat.