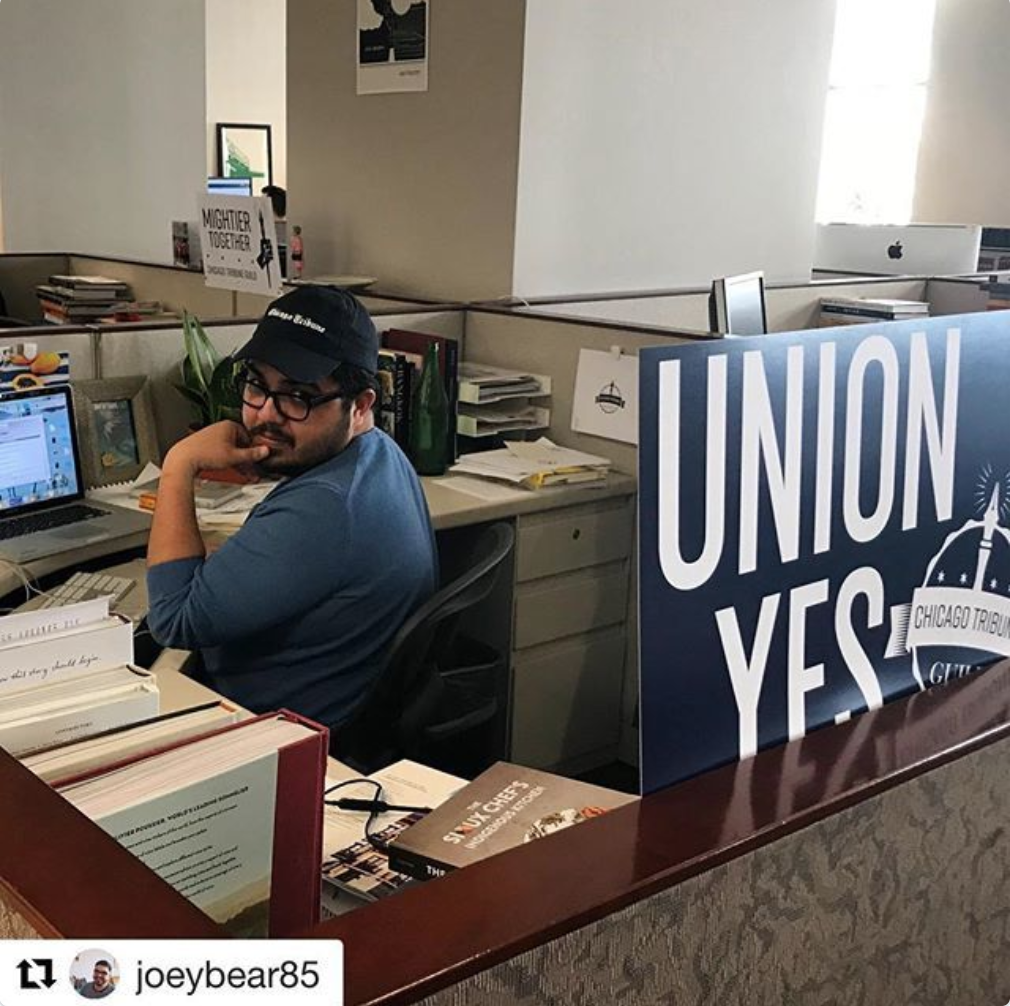 April 24, 2018 – Journalists at the Chicago Tribune have amassed support from 85 percent of newsroom employees for their efforts to form a unit of The NewsGuild-CWA, organizers announced Tuesday.

They asked Editor-in-Chief and Publisher Bruce Dold to voluntarily recognize the union and said they would submit signed union cards to the National Labor Relations Board on Wednesday to schedule a vote on the matter if he refused or failed to respond to their request.

“More than 85 percent of our colleagues have signed union authorization cards in support of the Chicago Tribune Guild,” they wrote in an email. “The 46-member organizing committee is drawn from all over our newsrooms, and the large number of signatures collected within days reflects that wide reach and our dedication.

“Voluntary recognition would allow us to begin contract negotiations, saving the company the cost and inconvenience of a campaign and an election that will result overwhelmingly in our favor.

“If we do not hear back by the deadline, and/or if the company does not wish to voluntarily recognize the Guild, we will file the signature cards with the National Labor Relations Board,” they wrote.

Organizers seek to represent close to 300 journalists at the Chicago Tribune, as well as those at several affiliated community newspapers – Spanish-language newspaper Hoy, the Naperville Sun, the Elgin Courier-News, the Daily Southtown, the Aurora Beacon-News and Chicago lifestyle site RedEye.

“It is quite a turnaround in fortunes for unions at Tronc, which comes from a strong anti-union background,” David Folkenflik wrote for NPR. “Historically, the Tribune and its corporate owners took a strong stance against unions at the paper and in society more broadly.

Tronc’s resistance to a union organizing drive at the Los Angeles Times resulted in a landslide vote in favor of the union. Tronc announced it would sell the Times and The San Diego Union-Tribune less than three weeks later.

The January union victory at the L.A. Times was quickly followed by successes at smaller outlets: The Casper Star-Tribune in February, Mic.com in March, the Missoula Independent in April, and The New Republic earlier this month.

“There is a rebellion brewing in newsrooms around the country,” said NewsGuild-CWA President Bernie Lunzer. “The journalists of the Chicago Tribune are a reflection of that. Workers are demanding better pay and benefits and they are demanding a voice in the way their publications are run.

“They are tired of endless layoffs and assaults on their ability to do their jobs effectively,” he said.

“A senior Chicago Tribune editor, Metro Editor Mark Jacob, announced on April 5 he was leaving the company and tweeted: ‘… owners and managers of media companies must embrace a mission of journalism as public service, invest in their people and show bravery and independence. Our democracy depends on it,’” NPR reported.