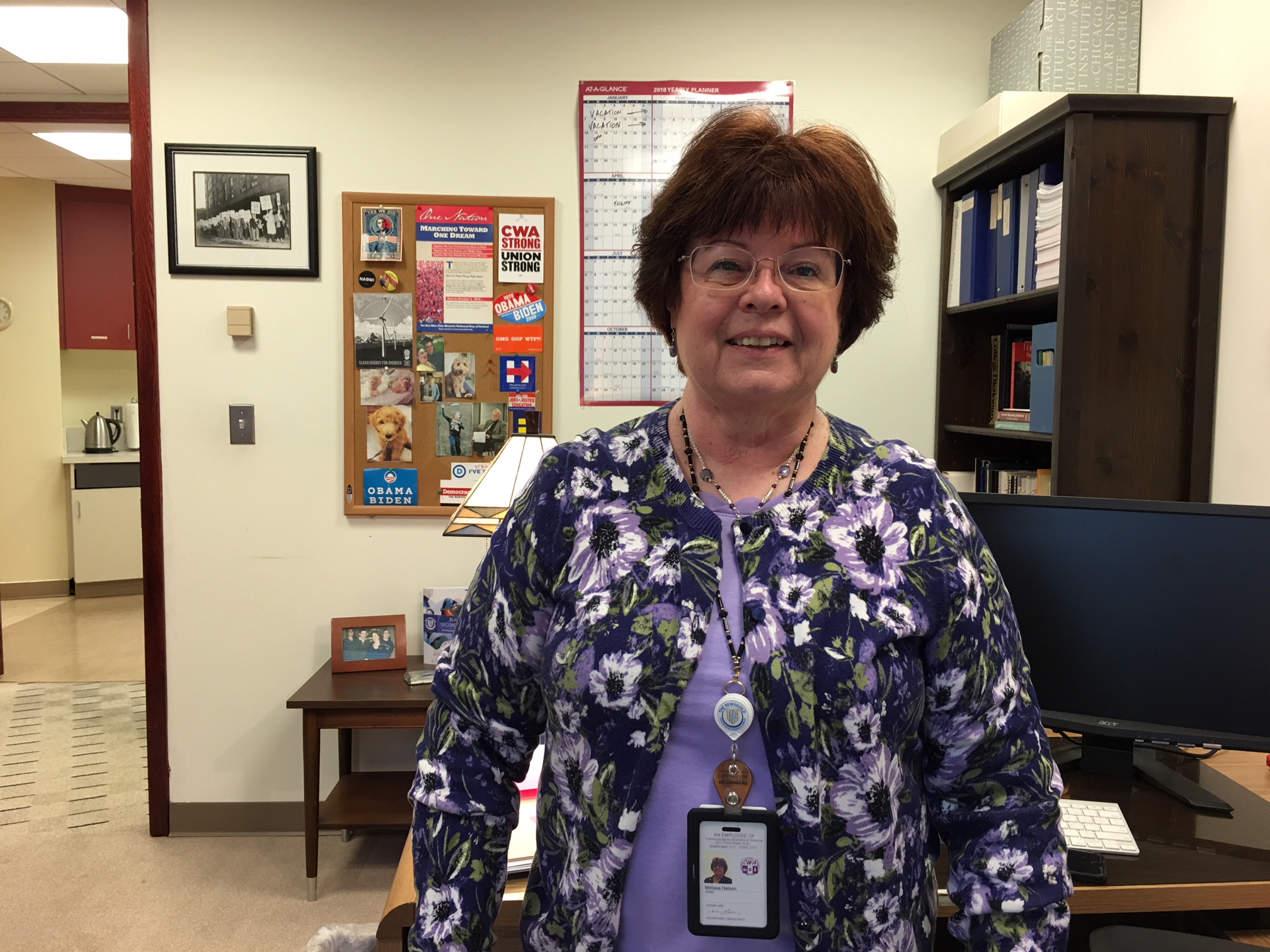 April 23, 2018 – Melissa Nelson will retire on April 27, capping a 35-year career of NewsGuild activism, including 11 on the staff of the national union. She served the national union first as a field rep and eventually as director of collective bargaining, where she reviews contract proposals and settlements, and advises union negotiators.

As dry as her duties may sound, Melissa Nelson is beloved. She is known for her encyclopedic knowledge of the Guild’s 270+ contracts, her steady demeanor and wise counsel when locals are entangled in tough negotiations with management, and her supportive, optimistic attitude.

“Four generations of my family worked for the ‘TU’ [Times Union], as pressmen and printers, reporters and ad sales reps, in circulation and home delivery,” she said. “All were active union members. We were and are proud of both of those legacies.

“Newspapering was in our blood.”

Nelson began her career in 1980 in Albany, NY, at the TU and the Knickerbocker News, known then as Capital Newspapers.

But she didn’t immediately join the Guild.

“I was a graphic artist in the advertising department with a college degree, a modicum of talent, and the brass and sass that came with being a 20-something woman during the decade of the ’80s,” she said.

After she complained repeatedly to her sister Diane, a staunch Guild member, about the fact that the all-female department of ad artists were getting paid about $200 per week while the all-male editorial artists were paid $350 plus, her sister told her to stop complaining and do something about it.

She did. In 1983, Nelson signed a union card and never looked back.

Without any ad artists on the local negotiating committee, the first attempt to achieve wage parity sputtered. Nelson joined the bargaining team in 1985 and made sure that pay parity was included in the Guild’s wage proposal.

The ad artists won the support of the editorial artists, who designed a button and bulletin board posts supporting the demand for pay fairness. The ad artists pitched their demand to the Guild’s bargaining committee and then to both management and union representatives during a negotiating session. “The editorial artists were in the room cheering us on,” Nelson said.

It took well over a year to settle the contract, but when an agreement was signed in 1986, the ad artists got a bump of 30 percent. “Not parity, but it was the biggest single wage increase for any group in the bargaining unit covered by the Albany Guild,” she said. It took a succession of contract negotiations to achieve parity, which finally occurred in 1997, 14 years after the first attempt, Nelson said.

“There were pockets of educated, experienced and underpaid women in jobs in every department of the paper – from inside ad sales to clerks in circulation, editorial and accounting.” Winning wage parity, along with recognition of the women’s skill and experience, remains the Guild accomplishment Nelson is most proud of.

Nelson worked at the Times Union for 18 years before plunging into Guild work full-time. In 1999, she was sought out and hired by The Newspaper Guild of Philadelphia as a local representative, a position she held for 8 years.

In 2007 Nelson became the Guild’s director of collective bargaining, where her responsibilities have included reviewing contracts, bargaining proposals and settlements; assisting local staff and elected leaders, and administering the Guild’s legal services program.

At the Guild’s headquarters, she has also served as an officer of the Federation of Guild Representatives, the union that represents the NewsGuild’s professional staff. For 8 years, including as president for the past 5 years, she addressed pension, healthcare coverage, contract administration and bargaining issues. As in her other Guild work, she brought reason and calm to sometimes-intractable problems.

“I have spent almost 40 years in a relationship with TNG,” Nelson said in an email notifying colleagues of her retirement. “That’s more than the combined length of both of my marriages.” (She’s still working on her second marriage, to long-time, retired Guild leader Bruce Nelson.)

“Like any relationship, my life with the Guild has had its own ups and downs. … Every moment has been filled with challenges and successes, even during the most difficult times in the labor movement. … My connection with the Guild has been long-lasting and extremely rewarding.”

She will be missed.