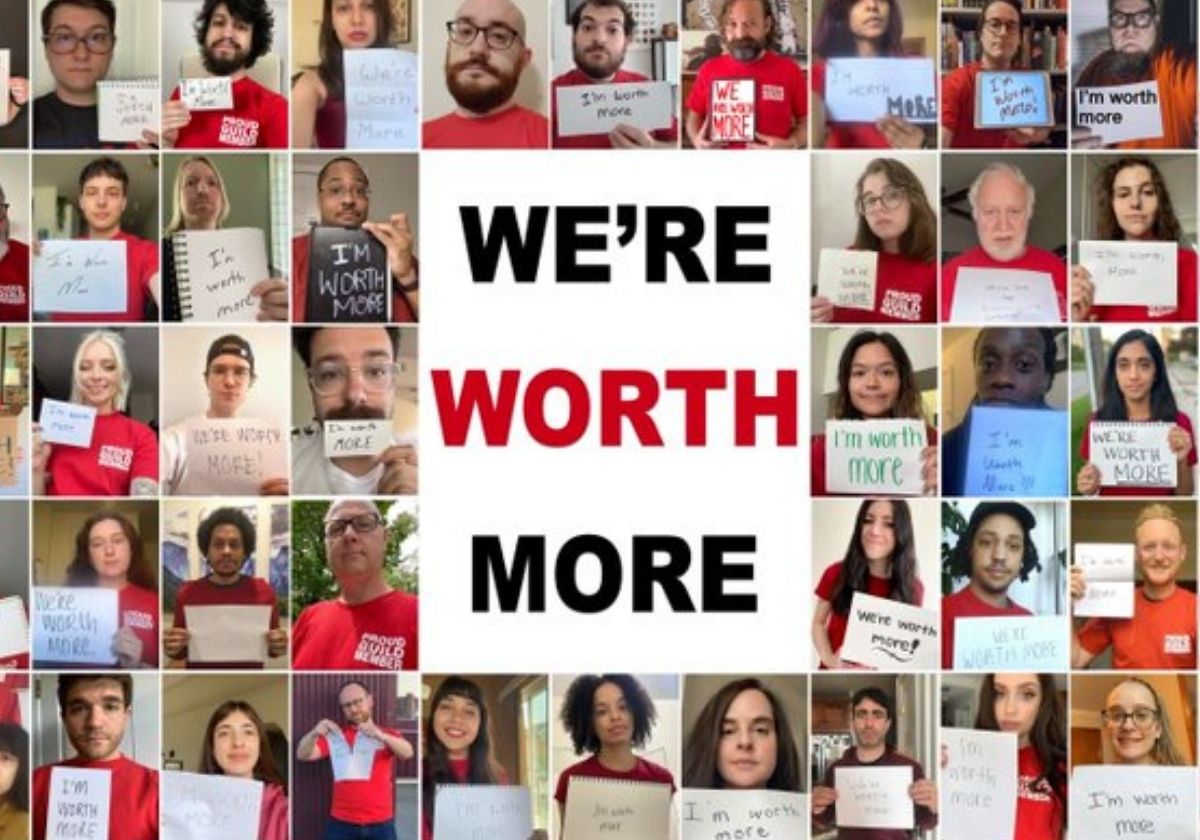 After nearly 12 hours of bargaining Wednesday, members of Ziff Davis Creators Guild, a unit of the NewsGuild of New York, announced that they reached an agreement on a first contract. The Ziff Davis group is made up of about 70 editorial workers at AskMen, PCMag, and Mashable.

The workers secured guaranteed annual raises, a cash bonus for every member, salary minimums and clear standards for pay based on promotion and job title.

“There’s a clear and agreed upon understanding that when you do more work and move up in the company you need to be compensated for that. Not just a title change, but more pay,” said Max Eddy, unit chair of Ziff Davis.

“As a union we can come up with really good ideas that weren’t available before and can solve all kinds of problems that wasn’t possible before,” he said in talking about winning requirements to promote more diverse hiring, which the company is implementing company-wide.

The workers joined a large fight with workers at other employers last October to win just cause protections from indiscriminate terminations by management.

“We shouldn’t have to fight over that, but we did,” he said.

Last month the workers announced that 97% of them voted to authorize a strike to win a first contract. The vote followed a one-day walkout in April to pressure management to move on economic issues. Negotiations continued to drag on with little progress, however, despite the fact that shares of Ziff Davis’ parent company, J2 Global, were up more than 25% from the beginning of the year. Workers wrote to shareholders and members of leadership, calling on them to support getting to an agreement.

“In the last couple of months when bargaining was reaching a fever pitch we felt it was necessary to call for a strike authorization vote,” Eddy said. “That’s scary for a new shop like ours. We started out four years ago and didn’t think that would happen.”

Unit leadership reached out to all the members and talked to them in advance of the vote. “I was nervous about calling people and was happy to find out that people had a lot of questions, but were very supportive.”

“It’s so wonderful to see people expressing their fears and concerns, but overcoming them to do the right thing for each of our colleagues,” he said.

Members will vote to ratify the contract in the coming weeks.

And late last week the Quartz Union announced a tentative agreement on a first contract, which will be put before members for a ratification vote in the next week or two. The Quartz Union represents about 20 editorial staffers at the business publication and is also part of the New York Guild.

The settlement establishes salary minimums for various classifications of full-time assignments and guarantees yearly raises. Any merit raises will be given on top of the minimums. The agreement also establishes an hourly minimum for interns and fellows, a rate that will increase with time.

“I was so wary when the process started,” said Alex Ossola, unit chair of Quartz Union. “When the union was first recognized some people worried it would create discord. It definitely got heated at the table, but we always showed up trying to be productive. Management did the same thing,” she said.

“Just cause” and whether there would be an editorial exception, as management proposed, was a contentious issue at Quartz too. “True just cause doesn’t have any exceptions,” Ossola explained, because management could use the exception as an excuse to get rid of anyone they wanted to.

Negotiators educated members about what management’s proposal would mean for them and, together, they “made some noise,” talking about it frequently on work’s Slack, using just cause emojis, and supporting the campaign for “Just Cause, No Exceptions” at the publications of Condé Nast.

“We’re part of this larger moment within the Guild,” Ossola said. In the end, “We got just cause with no exceptions because The New Yorker cracked it.”

NewsGuild President Jon Schleuss said, “Across the Guild we have about 90 first contract fights on our hands. So many workers are organizing and building unions right now it is beyond impressive. I’m incredibly inspired by workers at Quartz, AskMen, PCMag and Mashable.

“They’re raising the bar for media workers everywhere,” he said.

Photo at top: Members of the Ziff Davis Creators Guild announce in May that they had voted in favor of authorizing a strike with 97% support.