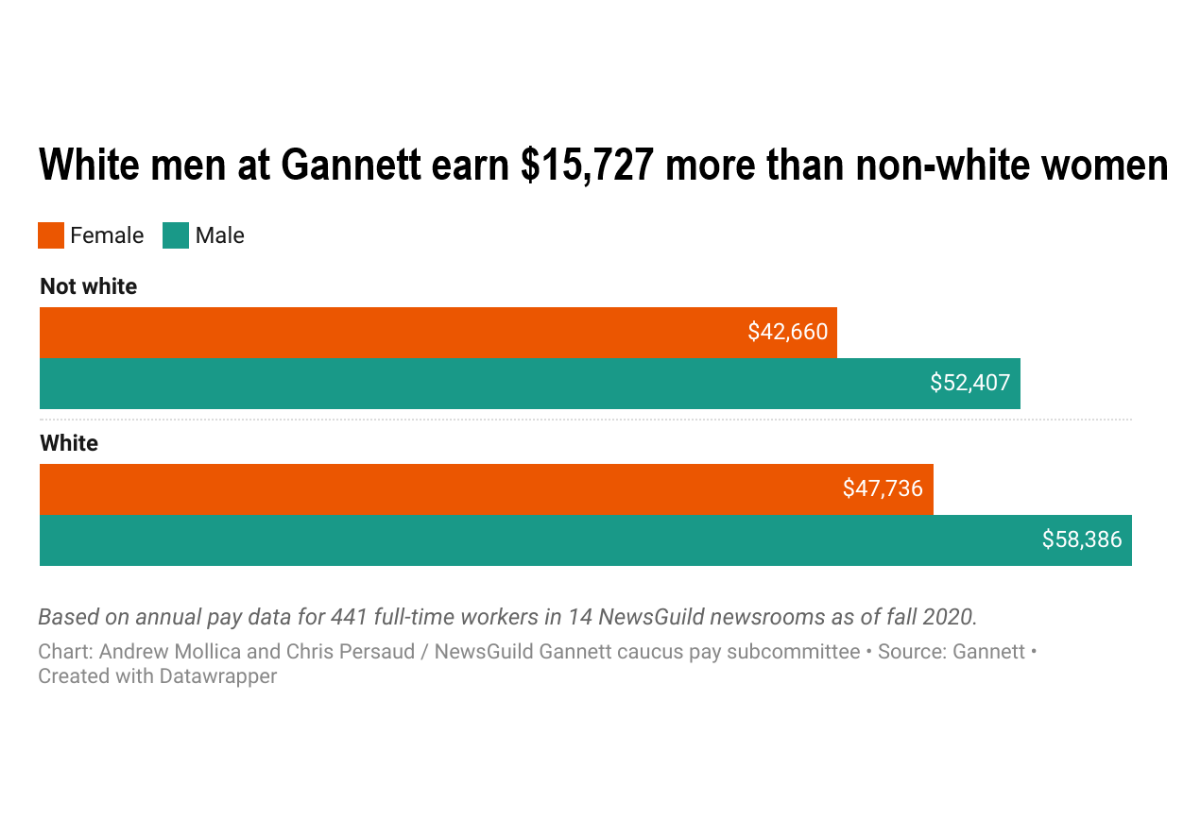 A first-of-its-kind pay equity study of 14 Gannett newsrooms by NewsGuild members sheds light on stark pay disparities for women and journalists of color and a workforce whiter than the communities they cover.

The study of nearly 450 employees also shows that unions make a difference. Unionized newsrooms with pay scales in their contracts had significantly smaller gender and racial pay gaps than newly organized units with no contracts yet in place.

Members of the NewsGuild, an international union of journalists, have led the way in calling for fair pay in the media industry.

But this is the first time, we believe, a pay equity study has been released for multiple units across a newspaper chain. By combining data, small newsrooms that would not have been able to conduct pay studies on their own were able to participate.

“I want to see more people of color and more experienced women of color in leadership roles at Gannett. More needs to be done to retain us and promote us. We need to pay fair wages and mentor journalists of color with purpose to retain them and inspire young journalists. This report shows Gannett has a lot of work to do.”

“We participated in this study because open conversations about pay help everyone. This report shows that the company cannot write off the concerns that women and journalists of color have about pay inequity. If Gannett truly wants to support diverse newsrooms, there is no other place to start than making sure people are fairly compensated.”

“Data journalists from across Gannett collaborated on this 9-month project. We gave the pay equity report as much care and consideration as we do our deepest, award-winning journalism to ensure its accuracy and impact.”

Gannett pledges diversity, but doesn’t back it up with pay

Gannett pledged in 2020 to hire and promote more women and employees of color to reflect national and local demographics in the workforce.

The company announced “inclusion, diversity and equity are core to our business,” and all employees should have “equal opportunities to thrive.”

“(W)e are committed to … driving positive change. While this will, at times, mean addressing and combating systemic barriers and having uncomfortable conversations, we believe silence is not an option. We want to … become a leader not just in what we do, but who we are as a company,” CEO Mike Reed said in the 2021 report.

However, neither report promised to ensure fair pay or correct pay gaps, key parts of attracting and retaining talent. And though the company touted its commitment to transparency, Gannett has never publicly released a pay equity study.

We believe our 14 newsrooms are not outliers but examples of the problems with, and potential solutions to, pay equity across Gannett.

We call on Gannett to: