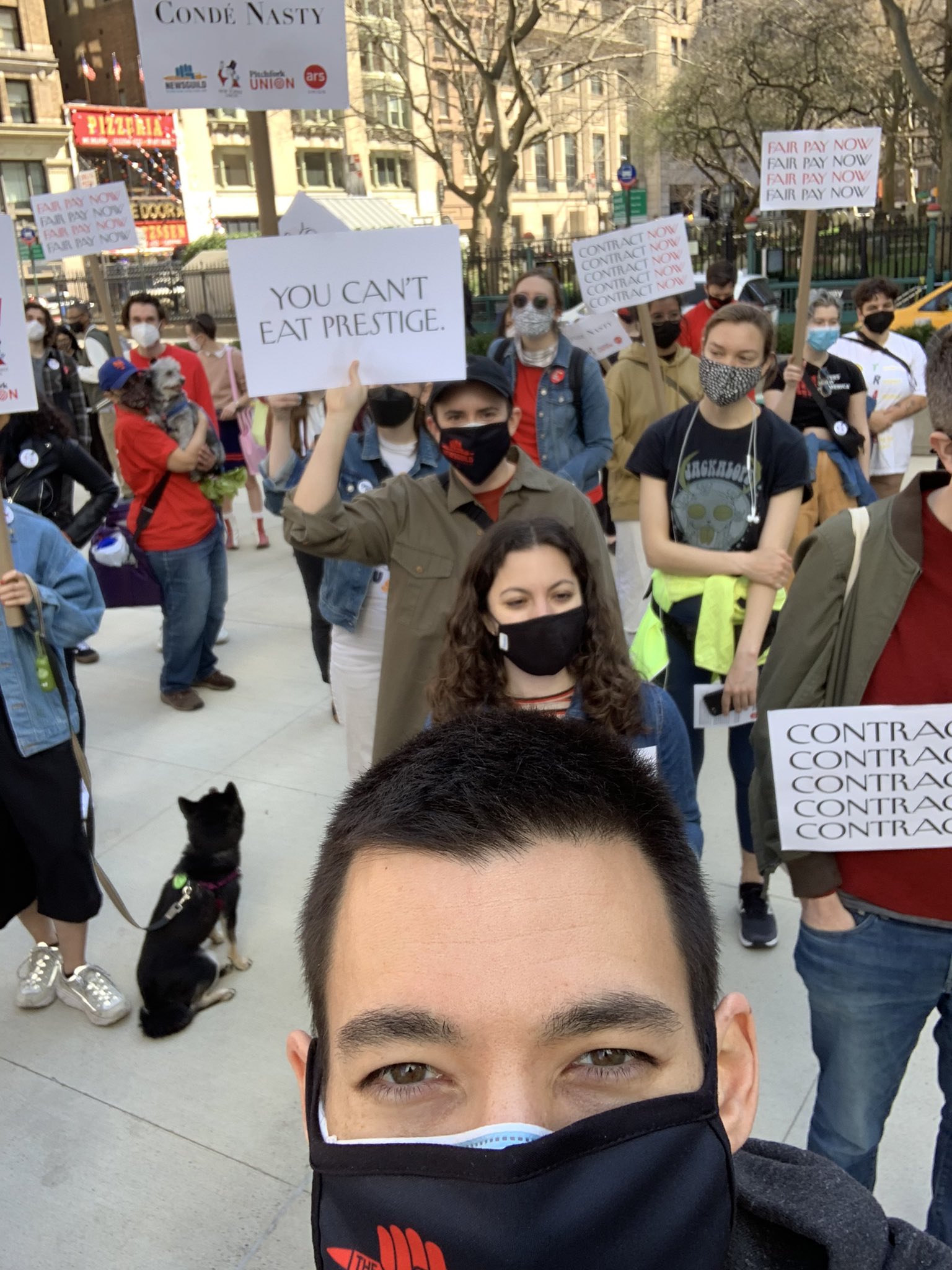 NewsGuild members at The New Yorker, Pitchfork, and Ars Technica voted — with 98 percent support — to approve a strike if negotiations with management of their publications and their parent company, Condé Nast, break down further. The vote came on March 26 after years of contentious negotiations for first contracts at each outlet.

Workers followed with a socially-distancedrally at One World Trade Center, which I attended, along with more than 100 others. In January, employees of The New Yorker held a 24-hour work stoppage to press their demands, but knew they needed to escalate pressure on the company.

“You can’t eat prestige,” which appeared on many of the signs, summed up the message perfectly.

Contract talks are centered on fair pay, a safe and inclusive work environment, and ending practices that exploit workers and undermine their work-life balance.

You can support the workers by signing a pledge to support them and by following them on Twitter.

Our union continues to organize, with employees at Entertainment Weekly, Martha Stewart Living, Shape Magazine and PeopleTVwinning their union vote with 93% voting in favor to join the NewsGuild of New York on March 25. They’re fighting for job security, higher wages, affordable and equal access to benefits, “a demonstrable commitment to diversity and inclusion,” and transparent editorial standards. Follow them on Twitter.

Workers at Duke University Press announced March 29 that they are organizing to form the Duke University Press Workers Union as part of the Washington-Baltimore Local 32035. For years, DUP has struggled with high turnover, extended vacancies, low compensation, inconsistent policy enforcement, and patterns of discrimination. Yet the company is at the forefront of publishing content that is traditionally marginalized, including Black studies and queer studies. If Duke University Press truly stands for the ideals it espouses, management will grant the workers voluntary union recognition ASAP.

Journalists moved to form South Carolina’s largest news union, The State News Guild, on March 31, also as part of the Washington-Baltimore Local. They’re working to foster an environment where they can continue “producing works of truth, accountability, culture and compassion without constant worry of professional insecurity.” The State is part of the McClatchy chain, and a union victory at The State will strengthen workers’ power across the company.

When the staffers at Planned Parenthood PA Advocates announced March 23 they were forming PPPAUnion, they already knew a thing or two about organizing: In December 2020 they forced the executive director of the organization to resign after charging her with being “fiscally irresponsible” and saying she used “racist, transphobic, classist language, and language which perpetuates stigma against abortion.” Their efforts won over the entire staff of the nonprofit, along with more than 900 others, including several state legislators. They will also be part of the Washington-Baltimore Local.

We recently retained an independent consultant to conduct a review with our members at the Newspaper Guild of Pittsburgh to improve our culture and policies and make sure our union is safe for every member. The review is in response to member feedback in the aftermath of allegations of sexual harassment and misconduct that came to light last September involving the former local president and an investigation done by our union.

There is no place for harassment in our union and it’s prohibited under CWA’s policy on mutual respect.

We’ve been coordinating with members of the local’s Human Rights Committee for several months and I’m excited to see this new phase of work get started. Once the interviews are completed, Rebecca Feaster, the consultant, will release a report to the Guild with suggestions on how we improve our policies and culture.

Our fight to stop Alden Global Capital, known as “the destroyer of newspapers,” from taking over Tribune Publishing marches on!

NewsGuild units in the Tribune chain have been organizing individual Save-Our-Baltimore-Sun-style campaigns in each of their areas for close to a year – talking to civic leaders, elected officials, readers and others about the importance of saving local news and promoting local ownership of news outlets. They’ve launched open letters and petitions, built websites, reached out to local politicians, held community forums and testified before state legislatures.

They’ve also been meeting with pro-journalism philanthropists and asking them to buy their publications. Finding billionaires who are willing to invest their fortunes in their hometown newspapers hasn’t been easy, but recently, as a result of our members’ dogged efforts, several have expressed interest.

We have to stay organized in our fight to Save Local News.

As part of that fight, I joined members in Baltimore for a large rally with community speakers, calling for local control of the Baltimore Sun. Even though some speakers haven’t loved the coverage in the Sun, they were dedicated to seeing a local news outlet that reflected the diversity and promise of Baltimore. Education Reporter Liz Bowie called the paper the mirror of the community and one that needs to be saved from Alden.

Yesterday afternoon the Wall Street Journal reported that a rival group has made an official bid for the entirety of Tribune Publishing after talks broke down with Alden.

The Canadian Media Guild, the NewsGuild-CWA local that represents workers at Ontario’s two government-funded television networks, denounced pay increases awarded to managers when most employees have been held to increases of 1% due to legislation that caps pay increases of public sector workers’ wages for three years.

But the Ontario’s Sunshine List shows that most managers at TVO were given raises of at least 5% and senior managers were paid about 15% to 20% more than in 2019. TVO’s Executive Board mandated these highly-paid managers to deny union members any pay increases above 1%.

The same was true for the French language broadcaster Groupe Média TFO. Managers there were given an average increase of 4.77% with the two highest increases at 11% and 13%.

The Canadian Media Guild is calling for wage fairness at TVO and TFO and has joined acoalition of unions challenging the legality of Ontario’s Bill 124 that bars workers from earning more than a 1% pay increase a year.

We recently launched a series of events and training workshops for union members, covering a wide array of topics. This month will include a One-on-One Workshop (1 – 2:05 p.m. EDT, April 17), and the first in a series on the legal rights of stewards (7:30 – 9:30 p.m. EDT, April 26, Requests for Information). Upcoming topics include Just Cause on May 24, and Past Practices on June 28. Sign up here.