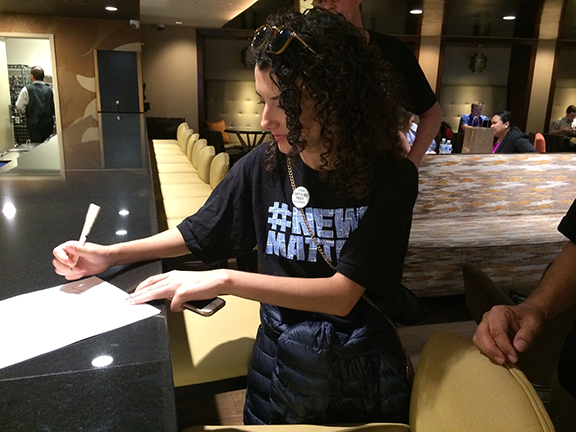 After George Floyd’s killing and the national reckoning on race that followed, journalists at the Denver Post have been meeting regularly to look deeply into the newspaper’s role in perpetuating “systems of racism and inequality and to seek solutions.”

It was July, and the paper’s reporters were struggling to do their jobs during a pandemic while dealing with weeks of company-imposed furloughs. Yet this small group — a number of them women and women of color — kept on meeting, “because it’s the right thing to do,” said Elise Schmelzer, a criminal justice reporter at the Post.

“For so long newspapers were and are overwhelmingly white and staffed by people from middle and upper-middle classes,” Schmelzer said. “It’s time to change that and make sure people whose voices have been left out have a place in our newspaper.”

“I’m a Latina reporter, one of the few people of color in our newsroom.,” said Post reporter Elizabeth Hernandez, one of the group’s founders. “This is just long past due.”

They came up with a list of action items, obtained their union’s support and even got buy-in for the effort from newsroom management. The group also composed a letter to readers, explaining the newsrooms’ commitment to improving the paper’s diversity in both its staffing and coverage.

“We want a newsroom committed to telling the stories of people who are excluded or underrepresented in the pages of The Denver Post, and to giving those stories the resources and prominence they deserve,” reads the final version of the letter.

“The Denver Post staff does not represent the makeup of our larger community. Our coverage is not reflective of the diversity within our city and state. And we have failed to make these issues a priority.”

“The work is still being done. They’re not stopping us from accomplishing what we wanted to do.”

In early August 2020, the letter states, only 11% of the Post’s non-management employees identified as Latino or Hispanic, even though Latinos make up at least 21% of Colorado’s population.

“Only an additional 6% identified as any race or ethnicity other than white,” the letter said.

It called on the paper’s owners to:

It was a bold step toward self-examination and accountability, but not a surprising one, coming from the paper that launched the Denver Rebellion. Three years ago this week, the Post used its entire Sunday editorial section to decry the draconian cuts in staffing and resources brought on by the paper’s hedge fund owner, Alden Global Capital.

“It was bold and it was loud and it needed to be said,” reporter Noelle Phillips said at the time.

Reporters and other news workers who were once uncomfortable with the thought of “being the story” began taking to the streets and airwaves to protest Alden’s devastating impact on local news, and they’ve been outspoken ever since.

“I’m a journalist because I like to hold people accountable and report injustices,” Hernandez says. “So I’m not afraid to do that in our own industry and our own newsroom.”

Alden says “no”
Denver’s newsroom management and human resources staff were invited into the discussions, and, together, the group drafted a letter to tell readers about the newspaper’s strengthened commitment to diversity.

“We kept being told, ‘This is good,’” Hernandez said. After some tweaking, the group came up with “a letter everyone seemed happy with, which is miraculous.”

The plan was to publish the letter in the paper’s print edition and on its website. But the group soon learned the Post’s owner, Alden Global Capital, wouldn’t allow the paper to publish it.

“We got the news that Alden doesn’t want to hold itself accountable,” Hernandez said. Employees were told that Alden executives, who serve on the board of the Post’s parent company, MNG Enterprises, didn’t want to include any mention of past wrongdoings.

“They didn’t like that paragraph and said they couldn’t include it if they were going to publish it,” Schmelzer said.

On Wednesday, the Denver Newspaper Guild posted a new version of the group’s letter to readers on its website, and also described Alden’s refusal to publish it, under the headline, “Long overdue: Denver Post union commits to diversifying newsroom, coverage.”

“We did it anyway, as we always do,” said Hernandez.

“We won’t let them stop us,” the letter states. “We are committed to reversing the inherent structures in journalism that have excluded marginalized communities for generations. If Alden Global Capital won’t let us use The Denver Post’s platform to tell you this, the union will use its own.”

The response from readers has been extremely supportive, Hernandez and Schmelzer said.

“I’ve gotten a ton of positive responses, both from subscribers and people saying, ‘This made me subscribe,’” Hernandez said. “That felt great, which to me just shows, ‘Hey MNG, this is doing good things for our business.’”

Schmelzer says the group’s next step is to launch a source-auditing system. “Reporters log information about who we’re quoting and talking to, in hopes we’ll then see who we’re not talking to.” After that, reporters will start holding community conversations on diversity and coverage, she said.

Schmelzer and Hernandez said that despite Alden’s refusal to participate, they appreciate the support newsroom staff and management have given the effort.

“I’m just really proud to work in a newsroom where we are not afraid of our owners,” Hernandez said. “We’re still meeting weekly. The work is still being done. They’re not stopping us from accomplishing what we wanted to do.”