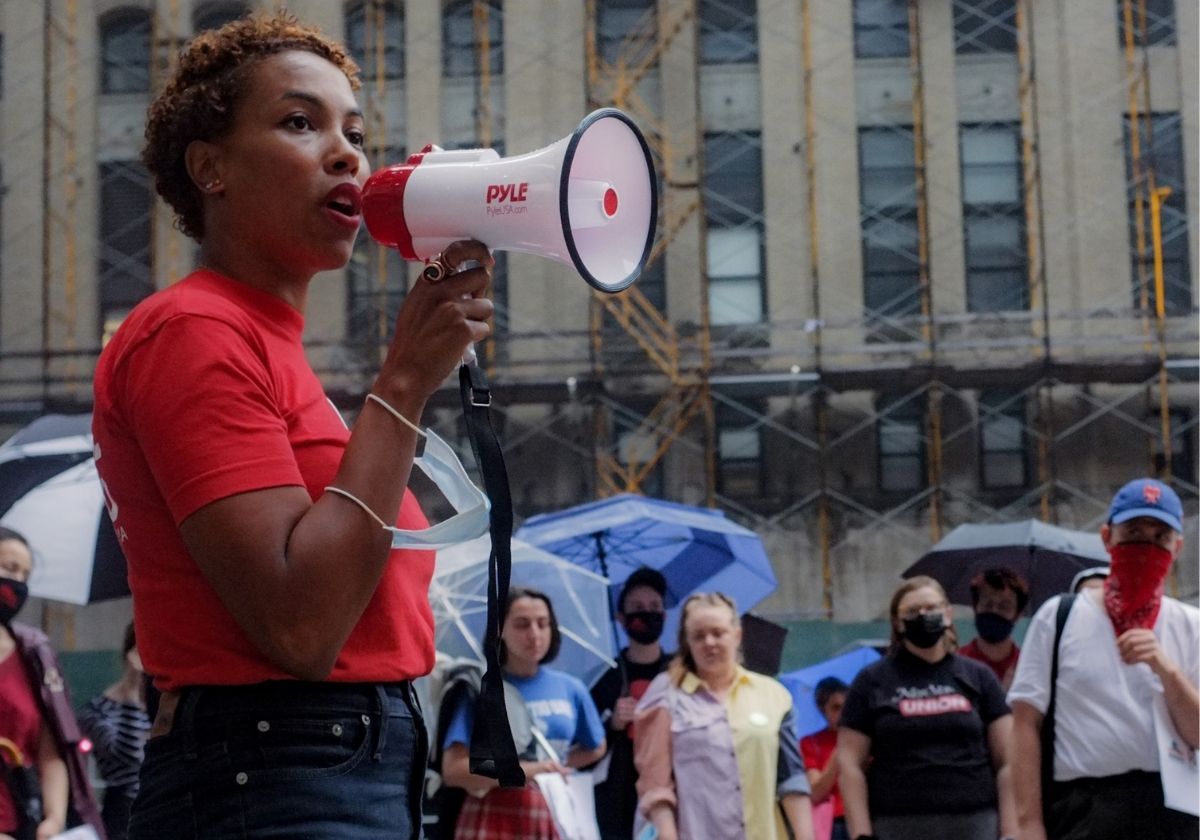 NewsGuild members at The New Yorker, Pitchfork and Ars Technica announced Wednesday that a strike has been averted and an agreement in principle has been reached on historic first contracts with Condé Nast, the publications’ parent company.

After almost three years of bargaining and escalating member activism, workers were euphoric.

“Thanks to our members’ hard work, the era of at-will employment and wage stagnation at The New Yorker is finally over,” said Natalie Meade, unit chair of The New Yorker Union. “To reach agreements in principle on the very first collective bargaining agreements at Condé Nast is a historic occasion, and we’re proud to have blazed the trail, setting a standard for compensation and establishing a framework of accountability that will benefit New Yorker and Condé Nast employees for years to come.”

The agreements include wage increases of up to 63 percent at The New Yorker, up to 58 percent at Pitchfork and up to 35 percent at Ars Technica. All three units will have a salary floor of $60,000 by 2023, the final year of the agreement.

The agreements also include strict limits on future health-care cost increases, defined working hours for salaried employees (40-hour workweeks and eight-hour days), a ban on nondisclosure agreements related to discrimination and harassment, and successorship provisions to help ensure that members’ hard-won collective bargaining agreements will remain in effect if any of the publications is sold.

The contracts are a clear example of the importance of worker activism in the fight for first contracts against recalcitrant employers. Frustrated by a lack of progress in securing a contract after winning union recognition in July 2018, workers built support among allies in the labor movement, among progressives, readers and their colleagues. Next, they took their case public – very public.

In October 2020, they called on Sen. Elizabeth Warren (D-Mass) and Rep. Alexandria Ocasio-Cortez (D-NY) to boycott The New Yorker Festival and organized a “digital picket” on the day they were scheduled to speak at the annual event. At the time, they were fighting for “just cause,” a key protection against unwarranted discipline found in most collective bargaining agreements.

Sen. Warren and Rep. Ocasio-Cortez dropped out of the event in an act of solidarity, and former Attorney General Eric Holder also declined to participate. Days later, workers won a tentative agreement on just cause.

But talks on others topics, especially pay and other economic issues, stalled. Workers kept the pressure on and in March voted to authorize a strike if negotiations continued to deteriorate – with 98% support from the three units. The NewsGuild Executive Council and CWA Executive Board unanimously endorsed and supported the strike vote.

On June 8, more than 100 workers protested near the home of Anna Wintour, the fashion maven who is Condé Nast’s chief content officer and global director of Vogue, garnering  extensive media coverage.

Two days later, they unveiled plans for a strike issue of The New Yorker, featuring a playful cover.

The workers also launched a website featuring member testimonials and pictures showing the massive level of support for a strike.

“The workers at Ars Technica, Pitchfork and The New Yorker showed us the only way to win strong contracts and that’s through escalating collective action,” said NewsGuild President Jon Schleuss. “I am in awe of their steadfast dedication to their publications, communities and colleagues.”

On diversity and inclusion, the agreements include a new joint labor-management diversity committee for each unit, data-reporting requirements to help track diversity outcomes over time and a company-wide commitment that 50 percent of candidates interviewed for open roles will be from underrepresented groups.

Additional protections include guaranteed severance and health benefits in the event of layoffs and language that limits the company’s ability to rely on temporary employees to perform unit work.

Ryan Dombal, unit chair of Pitchfork Union, said, “With this deal, Pitchfork staffers will finally receive the compensation, job security and respect they deserve. It marks a new era for music journalism, one that will continue to flourish moving forward.”

“Congratulations to the members of the New Yorker, Pitchfork and Ars Technica Unions on accomplishing a groundbreaking agreement that sets new standards for fair compensation, equity and job security in our industry,” said Susan DeCarava, President of The NewsGuild of New York. “Our entire Guild is immensely proud of all that our members have achieved due to their unflinching solidarity and resolve in addressing long-standing inequities at Condé Nast.”

In a joint statement, the unions said the agreements “will inaugurate a new era of equity, transparency and accountability at The New Yorker, Pitchfork, Ars Technica, and Condé Nast at large.”

Here are some of the wins the units secured:

These gains are the direct result of collective action—including a credible strike threat—proving that when we stand together and fight, we win. With these agreements, we have laid a foundation that will raise standards at Condé Nast and throughout our industry. We’re grateful for the support we’ve received from the staff and Guild members in New York and across the country; our allies across the labor movement, from the Freelance Solidarity Project to the Teamsters; local, state, and federal politicians who have championed our cause; and, especially, our colleagues, contributors, and readers. We couldn’t have done it without you. We’re excited for the work ahead.

Photo at top: Natalie Meade, unit chair of The New Yorker Union, addresses the crowd before the protest near the home of Anna Wintour. | Credit: Sarah Kobos.

Correction: An earlier version of this article included an incorrect number for the wage increase at Ars Technica. The correct number is 35%.