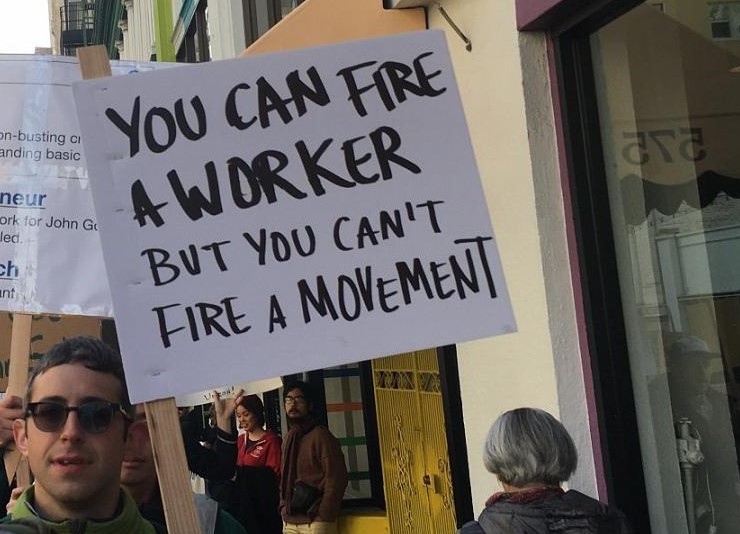 Nov. 10, 2018 – A small boutique software company got a tough lesson about union-busting on Nov. 9, when it agreed to shell out $775,000 to 15 programmers the logistics company fired after its developers announced plans to form a union. The 15 former employees of Lanetix comprised the firm’s entire non-management programming staff.

“This is a landmark win for tech workers,” said former Lanetix developer Sahil Talwar. “We have shown what can be accomplished by standing together and standing strong.”

The saga started when Lanetix fired a well-respected and outspoken female software engineer. Her colleagues thought the dismissal was unfair and brought their concerns about her termination and other workplace issues to management.

“We were told we needed to stop discussing workplace conditions as a group and raise our concerns solely to management,” Talwar said.

“In response, we wrote a letter asking management to do two things: Do right by the fired engineer, and recognize our right to organize.”

Management responded by disinviting the employees to a company retreat and announcing their intent to open an offshore coding center in Eastern Europe.

“Rather than back down, we decided to fight for our co-worker and we made the decision to unionize with the NewsGuild-Communications Workers of America (CWA),” Talwar said.

“Ten days after we announced our decision, Lanetix fired the remaining 14 employees.”

The CWA filed an injunction in court and filed a complaint with the National Labor Relations Board. “The CWA stood with us while the NLRB spent the better part of the last year investigating the case,” Talwar said. Most of the fired employees were quickly hired by other tech companies, but the workers kept up their fight for justice.

On Aug. 29, the National Labor Relations Board issued a complaint against Lanetix alleging numerous violations of federal labor law, including the decision to fire its programmers in retaliation for the workers’ decision to form a union.

“Firing us was wrong, and we’re pleased that Lanetix requested to settle our case a few days before we were scheduled to go to trial,” Talwar said.

The $775,000 payment that we settled on restores the pay the workers lost pay and compensates them for their unjust treatment, illegal firing, and financial hardship. The settlement also requires the company to remove our colleague’s firing from its records, post a statement at every Lanetix location detailing workers’ right to organize a union, and outline the terms of the agreement.

The NewsGuild-CWA represents more than 20,000 journalists and other
communications professionals in the U.S., Canada and Puerto Rico.