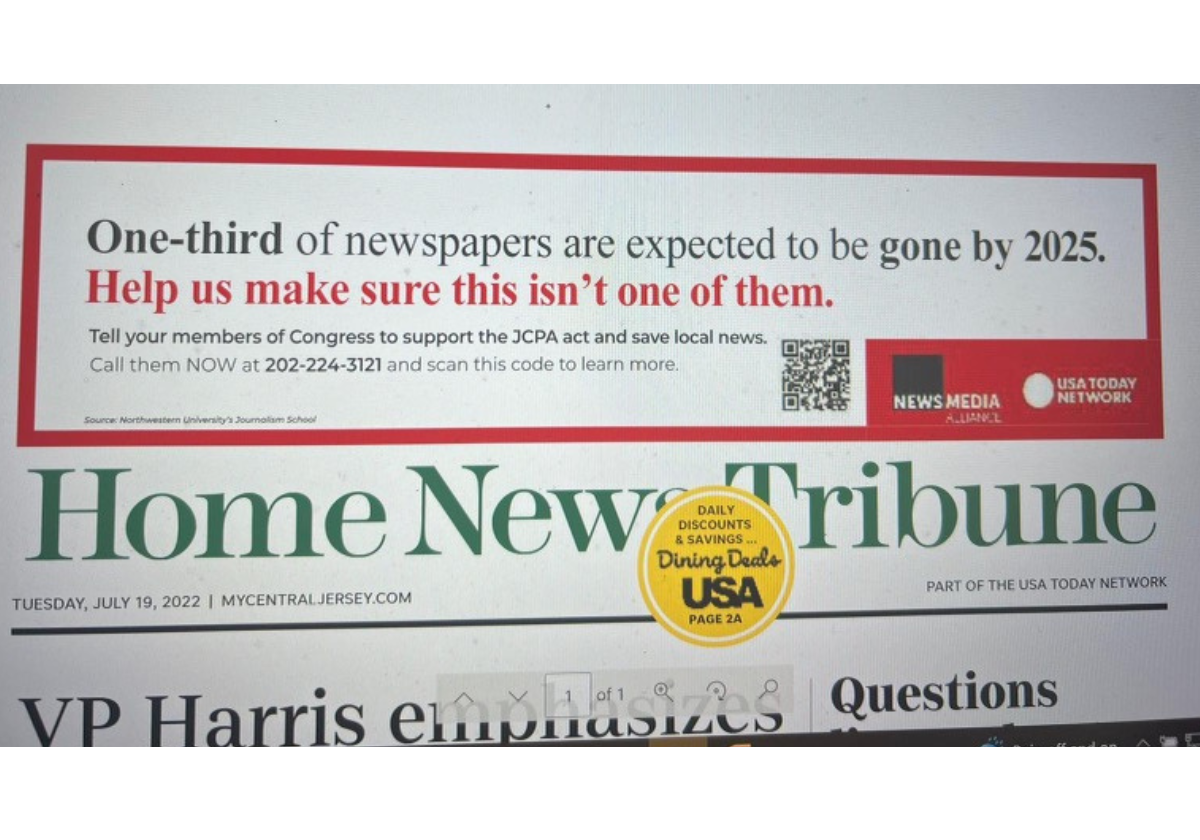 Did you see the ads and editorials starting last week calling for the passage of the Journalism Competition and Preservation Act? The News Media Alliance, which lobbies for news publishers, launched a blitz to pass the bill, which would give news companies collective bargaining rights to negotiate fees from Google and Facebook.

The companies argue that they’ve lost so much money to the advertising duopoly that the platforms control. It’s true that the news industry’s revenue has fallen off a cliff. And with that, so has the labor marke. Newsroom employment has declined more than 28% in a decade and more than 50% just for newspapers. Digital-only websites haven’t yet been able to make up for the job losses or local news coverage. Thousands of journalists have unionized in record numbers to gain a voice in their workplace to save and improve their jobs.

I’ve been advocating for improvements to the JCPA since March of 2021, when I testified before Congress. Since then we’ve worked in collaboration with legislators, publishers and other advocates to improve the bill.

If companies are going to get billions, that money needs to be invested in media workers and journalists. We’ve pushed for some major improvements in the bill, which should be public soon. I’m confident that we’re making progress to ensure better transparency and investments in jobs.

I’m excited for more money to flow into the news industry. But let’s be clear: this will be a big windfall for the news companies, the largest of which are hedge funds or controlled by Wall Street.

And I get sick thinking about the recent treatment of journalists by these companies. That behavior makes us cautious until we can get guarantees that money will be invested in newsrooms and to project jobs.

Gannett CEO Mike Reed raked in more than $7.7 million last year, while most Gannett journalists struggle to survive. And that’s in addition to Gannett’s announcement of a $100 million stock buyback earlier this year.

In last week’s newsletter, I highlighted the case of Danny LoGiudice, a beloved sports writer at the Asbury Park Press in New Jersey, who, after working at Gannett for seven years, earns just $37,000 a year, making him one of the unit’s lowest paid members. It’s not too late to sign a letter of support for Danny, which says, “We stand with Danny because Danny is all of us. So many of us aren’t getting paid living wages while they bring in record profits for our companies.”

Since then, the Utica News Guild reported that after asking for wage increases for two of their most senior and lowest paid members at a bargaining session in June, Gannett’s attorney promised a “win-win” solution by the next session.

But their July offer? Absolutely nothing. Members were told any possible wage increase would be decided at management’s discretion. Shameful behavior.

The Indianapolis Newspaper Guild took a light tone for a serious message: “We think some things should stay in the 2000s — low-rise jeans, crimped hair, Nickelback’s music… and most importantly, our pay scales. We’re telling Gannett to get with the times.”

The minimum salary in their current pay scale is $32,000, tens of thousands of dollars lower than the median income in Indiana.

The Record-Courier NewsGuild reports that their unit is half the size it was when Gannett took over.

Workers across the Gannett chain are uniting to demand better. They’re packing bargaining sessions, launching letter-writing campaigns, and working together to confront a news organization that seems intent on fighting its own journalists.

And we’re all demanding: If Gannett and the other big chains rake in BILLIONS from Facebook and Google, the journalists who create stories deserve a piece of it. Journalists deserve a living wage. And our readers deserve reporters who can afford to live in the communities they cover. And they deserve newsrooms that are fully staffed and that can provide comprehensive coverage of their cities and towns.

Members of the Austin NewsGuild are demanding that Gannett provide them with basic safety protections. “In the course of their work, reporters and photographers at the @statesman often find themselves in hazardous situations covering ice storms, tornadoes, fires, protests, shootings, and more,” they tweeted, illustrating the point with links to vivid examples of their hazardous reporting.

At the bargaining table, they asked for safety equipment and the use of a buddy system. They also proposed that if they cannot work because of a loss of power or due to hazardous conditions that they would not be docked pay.

But Gannett rejected these simple requests: safety equipment, a buddy system and no lost pay.

Support them by signing a letter to Gannett management and its legal counsel demanding that the company provide them the safety measures they need.

Business and tech workers at The Atlantic announced they are unionizing last week, joining editorial workers at the publication, who organized last year.

Workers are organizing for transparency, pay equity and respect. They’re also calling for a bigger say in the company’s digital and revenue strategy, especially when it comes to advertisers.

“This company runs on the daily decisions of its staff,” said Erin Boon, a senior data scientist. “Our judgment should be equally respected when it comes to setting the terms of our own employment.”

Journalists of The Hill, a Washington-based political publication, voted 45-18 to unionize in voting that was tabulated last week.

“I’m excited. It hasn’t sunk in yet,” technology reporter Chris Rodrigo said. “It was a long process that began in April of last year. It was a lot of getting in touch with people, finding out their concerns, and talking with them about how a union can help with those concerns.”

The staff writers, designers, video producers, members of the social media and events teams and The Hill TV who make up The Hill Guild now officially join the Washington-Baltimore News Guild Local 32035.

Workers want to increase diversity in the newsroom and improve benefits to keep people at The Hill. “We’re excited to start bargaining,” Rodrigo said. “We hope The Hill accepts our victory and begins to negotiate in good faith.”

Congratulations to the Journalists of the Everett Herald, who announced last week that they’re forming the Everett NewsGuild. The 23 reporters, photographers, page designers and web producers of the Washington state publication will become part of the Pacific Northwest Newspaper Guild Local 37082.

“We believe our job is more important now than ever as newsrooms are slashed in the name of corporate profits and journalists are forced to leave this profession for other industries that offer better pay and benefits,” they said.

“We love our jobs, we love this community, and we love what we do.” they tweeted. “But Sound Publishing,” which owns the paper, “doesn’t pay all its employees fairly or equally. This needs to change if the paper is to survive and maintain its quality of coverage.”

We hosted Part 2 of “Was that the Reckoning” last week with Desiree Stennett at the Orlando Sentinel, Erin B. Logan of the Los Angeles Times and Susan DeCarava, president of the NewsGuild of New York. During a little over an hour and a half we brainstormed ways to organize against anti-Black racism in the news industry and resolved to break into smaller groups to move our member-led union forward. The smaller groups will focus on caucus building and working with community partners. If you’re interested in this work, add your name here.

I sent another letter to the Biden administration pointing out that they have a clear choice: stand with journalists and the American people or stand with anonymous foreign investors and Wall Street mega-funds. We sent the letter to the president yesterday and you can read it here.

The Department of Justice and agencies that review foreign investments should reject the proposed takeover of TEGNA, a major local broadcaster, by a hedge fund and its private equity financiers.

Our members overwhelmingly support public policy that would prevent hedge fund ownership of news outlets. The carnage in our newsrooms proves why: these funds pay for their debt with jobs cuts.

The deal also lacks transparency. Standard General and its financiers have failed to document whose money they are investing. They have admitted that much of the capital comes from unnamed foreign sources, but refuse to disclose any details.

The president should stand with journalists and American families and reject the ploys of hedge funds backed by anonymous foreign investors.

We’ve got lots of great training sessions scheduled through the summer. Upcoming events are listed on our calendar, with new events added frequently.