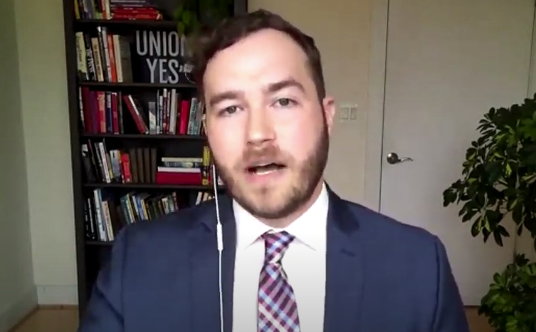 NewsGuild-CWA President Jon Schleuss told a House subcommittee on Friday that local news is facing “an extinction-level” threat that jeopardizes American democracy. His oral statement is below:

“Chairman Cicilline, Ranking Member Buck, and members of the subcommittee, thank you for having me today.

“My name’s Jon Schleuss and I’m president of The NewsGuild-CWA and I’m here to tell you about the extinction-level event workers are facing in the news industry.

“We’re the largest union of journalists in the United States, with thousands of news workers among our membership — at large publications like the Washington Post and New York Times and small ones like the Billings Gazette in Montana News and the Jacksonville Florida Times-Union. We’re also part of the Communications Workers of America.

“I grew up in rural south Arkansas and remember as a kid that my grandmother got two newspapers every day. The Arkansas Democrat-Gazette in the morning and the Camden News in the afternoon.

“Fast-forward to my first full-time job in the news industry which ended up being at the Arkansas Democrat Gazette. I was their online editor.

“I have a background in both computer programming and journalism, and I fused my skills to help us transition from printed newspapers to better news online.

“But two months into my job, the head of the company pulled everyone in a room to tell us that we were merging with our competing newspaper. Within a couple months, hundreds of people lost their jobs. I remember seeing reporters — mothers and fathers — crying in offices not knowing what their futures were going to look like.

“That was a quick introduction into the radical shift in the news industry.

“That’s been my life, and the lives of so many journalists — cuts, consolidation and local news sources getting bought out and gutted.

“At that time, I was told that for every dollar the newspaper made, 90 cents came from print advertising.

“In the last 16 years, 2,100 newsrooms across the country have shut down. And there are half as many newspaper journalists working today as there were a decade ago.

“That’s thirty-six thousand journalists no longer working in cities and towns across the U.S.

“Not providing communities a voice.

“The pandemic and the widespread economic pain across this country has sped up the revenue losses in newsrooms. And that 90 cents newspapers used to earn? That’s gone, too, as print advertising has dried up and digital advertising is raked in by mostly two companies: Google and Facebook.

“The revenue loss resulting from the platforms’ dominant market position has left many newsrooms in a weakened financial condition.

“And that’s left them vulnerable to takeover by predatory financial actors who don’t care about investing in local news. They only care about cash extraction, and they accomplish that by strip-mining local news outlets and cutting staff.

“What’s left are ghost newspapers, or no news coverage at all.

“These hedge funds, like Alden Global Capital, are cutting people off from knowing what’s happening in their communities and eroding our democracy.

“At 12 publications we have data on, Alden cut staff by more than 75% since 2012, faster than the already devastating industry decline.

“The ‘Journalism Competition and Preservation Act’ accurately identifies the problem of the excessive market power of Facebook and Google and we appreciate the bill’s focus on rectifying this core power imbalance between those platforms and the news companies.

“Google and Facebook benefit from the stories produced by journalists and they use the traffic they get to sell ads, capturing a majority of the digital ad revenue.

“The companies should pay their fair share when benefiting from the sharing of news stories.

“However, because many news companies put shareholder profits above our communities, we need specific, enforceable requirements to make sure additional revenue is tied to local news jobs.

“We recommend that at least sixty percent of any added revenue generated through collective industry bargaining be dedicated to new jobs.

“Further, we’ve experienced a wave of unionization in just the past three years with thousands of workers organizing to protect their jobs and their publications.

“Any organization receiving additional revenue must be required to bargain in good faith and remain neutral when their workers want to organize a union.

“We also want to ensure that medium and smaller publications benefit. Because of the industry’s consolidation — even in just the last two years — five companies, most of them controlled by hedge funds, own one-third of America’s daily newspapers and half of all newspaper circulation.

“In addition to taking on the tech platforms’ predatory behavior, we must address the attacks on local news by vultures like Alden by passing the Stop Wall Street Looting Act.

“The crisis in local news is a crisis of democracy.

“Congress needs to use its power to respond to this crisis for the good of our country.

Watch the hearing below.