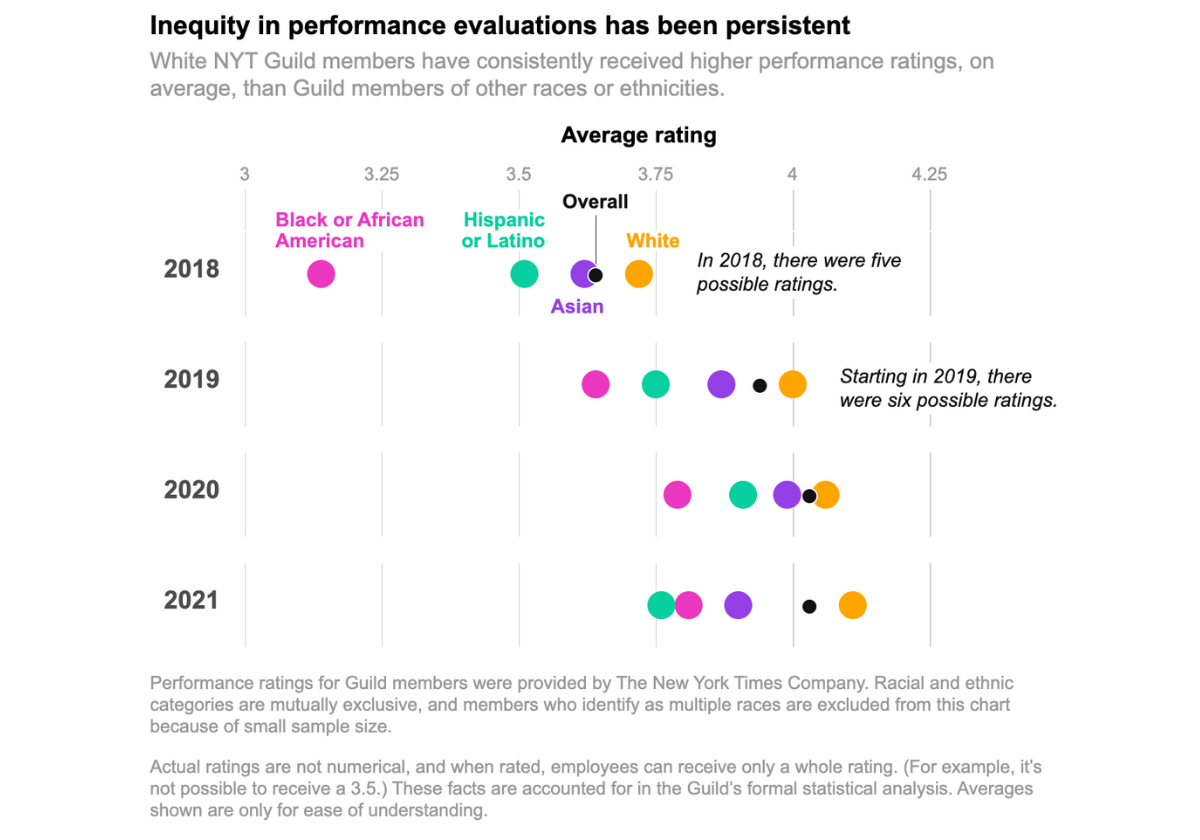 Instead of addressing the discrepancies, which Guild members first exposed in a 2020 report using data from 2018 and 2019, management has downplayed and denied them for nearly two years. The company hired Seyfarth Shaw, an anti-journalist law firm, to analyze the data, which concluded that the disparities were minimal and inconsistent. The firm gained attention decades ago for representing California growers against workers led by Cesar Chavez and more recently for representing the Weinstein Company in harassment suits.

But multiple independent experts consulted by the Guild said the methodology union members used in their recent analysis was reasonable and appropriate. They also said that the approach the company used was either flawed or incomplete.

Some went even further, suggesting the company’s approach seemed tailor-made to avoid detecting any evidence of bias. Rachael Meager, an economist at the London School of Economics, was blunt: “LMAO, that’s so dumb,” she wrote when Guild journalists described the company’s methodology to her. “That’s what you would do if you want to obliterate signal,” she added, using a word that in economics refers to meaningful information.

In addition to calling out management for the disparities, the New York Times Guild is pursuing the issue in contract negotiations, which are ongoing.

Congrats to members of ROC United, who voted unanimously to ratify a new contract last week.

The Restaurant Opportunities Center was formed in 2001 after the terrorist attack on the World Trade Center took the lives of 79 employees who worked at Windows On the World, located at the top of Tower 1. The current CEO of ROC is a former restaurant worker who survived.

Highlights of the new three-year agreement include:

NewsGuild members in Puerto Rico denounced police attacks on journalists who were covering protests against Luma Energy last week. Island residents were urging the government to cancel the private company’s contract because of frequent and long-lasting power outages.

In a video posted on Twitter, a journalist can be heard shouting to police, “¡Prensa! ¡Prensa! ¡Acredicado!” (Press! Press! I’m accredited!) as he is roughed up by a police officer.

The newest version of the Journalism Competition and Preservation Act is a lot like the old version: It still needs major improvement.

The revised Senate bill, announced last Monday by Sen. Amy Klobuchar (D-MN) and a bipartisan group of senators, would give news companies the right to bargain collectively with Google and Facebook to recoup advertising revenue the platforms have diverted from news organizations through their duopoly.

We’ve spent the last several months working to improve the bill, but it still lacks the necessary guardrails to make sure the added revenue is dedicated to hiring and retaining journalists.

Gannett, the biggest news chain in the U.S., is a good example of why the bill needs to be toughened up. Last year, CEO Mike Reed was paid $7.7 million, while Gannett journalists averaged just $48,419. The company authorized $100 million in stock buybacks, according to its SEC filings and in the last several weeks has laid off dozens of journalists. Yet under the language currently in the bill, Gannett could reap millions. And none of it is required to be spent on journalism.

Over the last several months, our efforts have secured several improvements to the bill:

We need to see additional improvements to the JCPA to make sure companies are staffing up newsrooms and not padding CEO’s pockets. Let your member of Congress know that the JCPA needs to invest in journalists and not hedge funds.

Union members at Guild-represented Gannett publications have been working together across the chain to expose the effects of Gannett’s ruthless, profit-above-all-else business model on journalists’ jobs and news coverage.

Hundreds of Gannett employees staged a “lunch out” on Aug. 11, in response to a string of emails from upper management that warned of layoffs due to the company’s self-inflicted second quarter financials. Less than a week later journalists organized together to demand answers at a management-sponsored Town Hall. Their chain-wide organizing efforts have clearly gotten the attention of management and media reporters.

They’ve also organized a community aid team that has distributed direct financial assistance to help laid off journalists with emergency costs, organized an online job board, and established a moral support letter-writing network.

The Duke University Press Workers Union is officially certified. Although we were confident of victory in March when NLRB rejected the company’s challenges to workers’ June 2021 vote, the final appeal by DUP to overturn the union election was denied just last week — Duke U. Press is unionized! Next stop: bargaining!

We lost a great leader last week, with the passing of Bill McLeman. Bill helped forge the Guild’s merger with CWA. He was key negotiator at the Vancouver Newspaper Guild and became its Executive Director. He eventually became the first Canadian director of the Guild and later the Guild’s director of field operations. He negotiated contracts all across North America — in Puerto Rico, Halifax, Wilkes Barre, Hawaii, Montreal, New York, Seattle, Vancouver and Victoria. Bill was beloved by many.

Labour/Labor Day is right around the corner! I hope you enjoy your holiday and get into a little good trouble. I’m excited to join the Canadian Media Guild marching in Toronto’s Labour Day Parade on Monday. I’ll also be in New York City for their parade on Saturday, Sept. 10. I hope to see you in person soon!

The NewsGuild’s Side-by-Side Program is an exciting way to provide national and local TNG staff with the opportunity to see colleagues in action and learn from each other. This model, advocated by CWA, has been an effective tool for staff development. Participants commit to 1 hour per week for 4 weeks beginning Sept. 6 and ending Oct. 3.Register here.