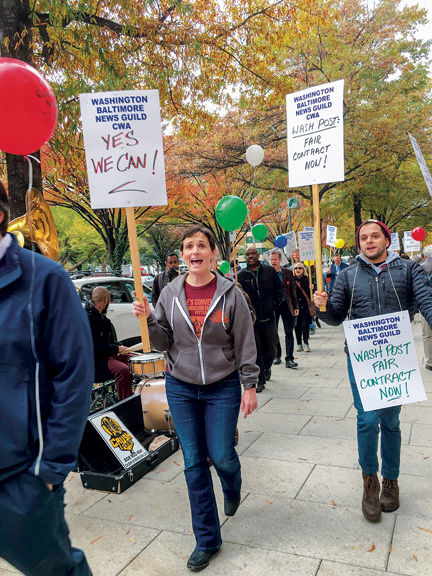 Yet the latest round of bargaining between Bezos and the Washington-Baltimore NewsGuild dragged on through last summer, fall and winter with miserly proposals from management and precious little movement.

The company is offering paltry pay increases — just $10 per week. For years, the Post has slashed retirement benefits and is refusing to address workers’ concerns this time around. Management is offering new employees a 401(k) match of just 1 percent.

Behind the scenes, though, a new cadre of young workers has given strength to a powerful internal organizing drive.

“The goal at the onset of bargaining was to sign-up 100 new members. That’s more than we’ve signed up in years,” said Robert Struckman, president of the WBNG.

By early 2018, they had signed up nearly 130 new members, and union cards have been coming in each week. The new members are asking questions about bargaining and requesting training on how to mobilize and take action.

In late January, a one-day Twitter campaign took off, attracting thousands of tweets as supporters from across the country called out Bezos and Post management.

Photo: Workers picket outside the offices of The Washington Post in November 2017.