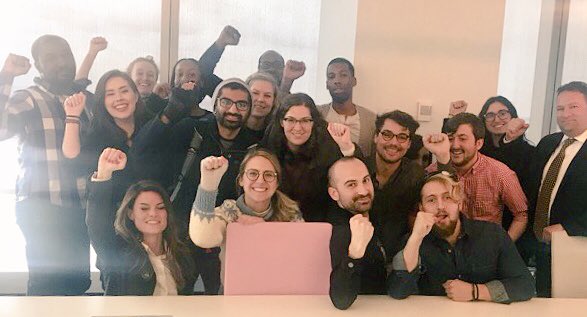 March 15, 2018 – Mic Media agreed to voluntarily recognize the NewsGuild of New York as the collective bargaining representative of its editorial staff on March 14, three weeks after workers announced their intention to form a union.

“We are thrilled to have secured voluntary recognition of our union and are eager to get to the bargaining table,” the staff said in a statement. “We look forward to working collectively toward a contract that ensures Mic is a workplace that includes and protects all of our workers.”

An overwhelming majority of Mic’s editorial employees announced their unionization effort on Feb. 20, citing the company’s commitment to social and economic justice as central to their organizing campaign.

“In forming a union, Mic workers are joining the growing ranks of workers at digital and print publications who are demanding a voice at work,” said NewsGuild-CWA President Bernie Lunzer. “We are thrilled to have them as part of our union family.”

Founded in 2011, Mic is an online media company geared towards young people who are passionate about social and economic justice. Mic employees joined the Guild to have a voice in their newsroom to address issues like job security, improved pay and benefits, a lack of regularly scheduled pay raises, and a clear path for professional development.