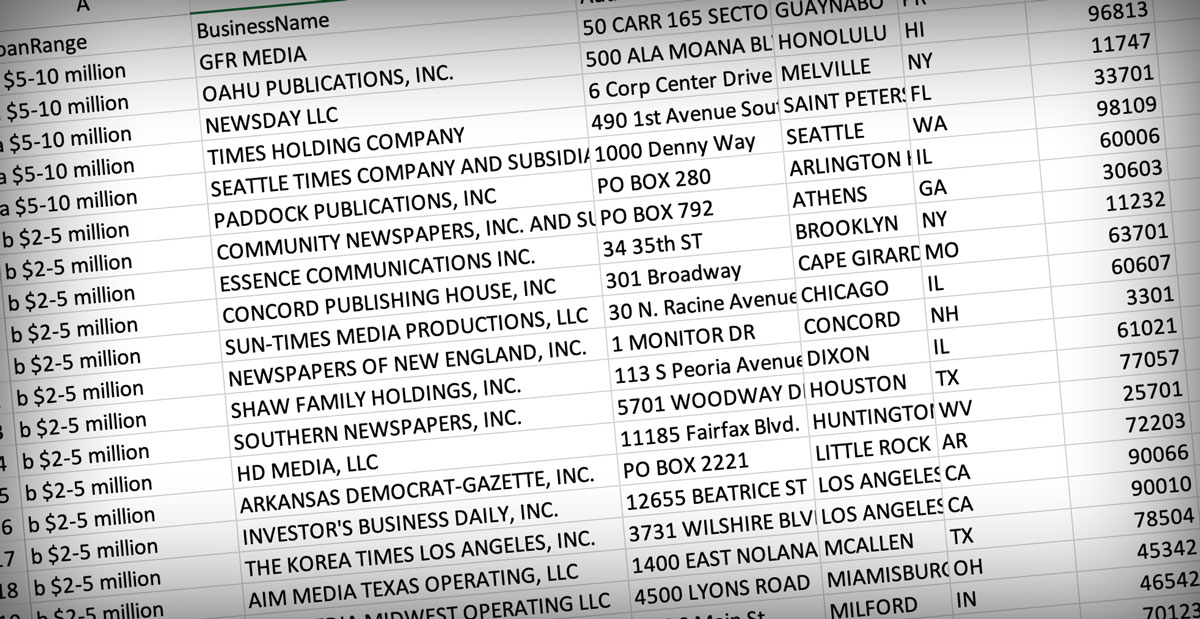 July 10, 2020 – Newspapers in every state received forgivable, low-interest loans through the Paycheck Protection Program to keep journalists working during the COVID-19 pandemic, according to data released this week by the Small Business Administration.

The data on PPP loan recipients, ironically only made public after news organizations sued the SBA under public information laws, shows that nearly 500 individual news outlets and chains tapped PPP loans ranging from $150,000 to more than $10 million.

“Many publications got these forgivable loans to prevent layoffs and furloughs to keep reporting out the news — critical at this moment,” said NewsGuild President Jon Schleuss.

Many news companies rely on advertising as the main source of revenue, but that’s been hammered by the pandemic and resulting economic fallout. PPP loans have provided a lifeline for many small news companies.

However, chains that own a third of the newspapers nationwide weren’t eligible for PPP loans under the 1,000-employee limit for the program. So far 50 local newsrooms have closed since the pandemic began.

“This can’t happen at a time when every community in America needs more journalists on the job,” Schleuss said. “Chains like Gannett, Lee Enterprises and Tribune Publishing, which combined own hundreds of newspapers, have furloughed a quarter of their staff on any given day.”

A bi-partisan bill currently before the U.S. Senate, the Local News and Emergency Information Act of 2020, would expand eligibility for the PPP program to include large news organizations, based on their needs at individual newspapers or broadcast stations.

Because the majority of PPP loan money— 60%— has to be spent on payroll, Schleuss noted that companies that apply will be able to keep more reporters on the street. Smaller newspaper chains who did qualify for the first rounds of PPP loans appear to have done exactly that.

In an article in the Arkansas Democrat-Gazette, Walter E. Hussman, chairman of the paper’s parent company WEHCO Media, Inc., said a $12.3 million loan the chain received in April allowed the company to avoid furloughs and layoffs at the nearly 20 newspapers owned by the Little Rock-based chain.

In Chicago, the Sun-Times announced the paper had received a $2.7 million PPP loan, and that investors in the daily had committed to putting additional funds to maintain critical news coverage despite a huge drop in ad revenue.

“As a public service, our newsroom is providing select COVID-19 coverage for free, including stories on where to get tested, a running update of virus-related news developments and a variety of graphics that track cases, deaths and other statistics,” a Sun-Times editorial from April said. “Being able to do this work means the world to all 164 of our full- and part-time employees, including not only our journalists but also our teams of sales, marketing, circulation, information-technology and finance professionals.”

A New York Times article this spring estimated 36,000 journalists have been laid off or furloughed in response to steep declines in advertising revenue, as businesses across the US were all but closed down by pandemic-related stay-at-home orders. The cuts come following a year in which 300 newspapers were shuttered or merged, according to the 2020 “News Deserts” report by University of North Carolina’s Hussman School of Journalism and Media.

The NewsGuild supports the bipartisan effort to expand the Paycheck Protection Program in a way that allows large chains to apply for location-specific support.

Write to your senator and let them know you do too.