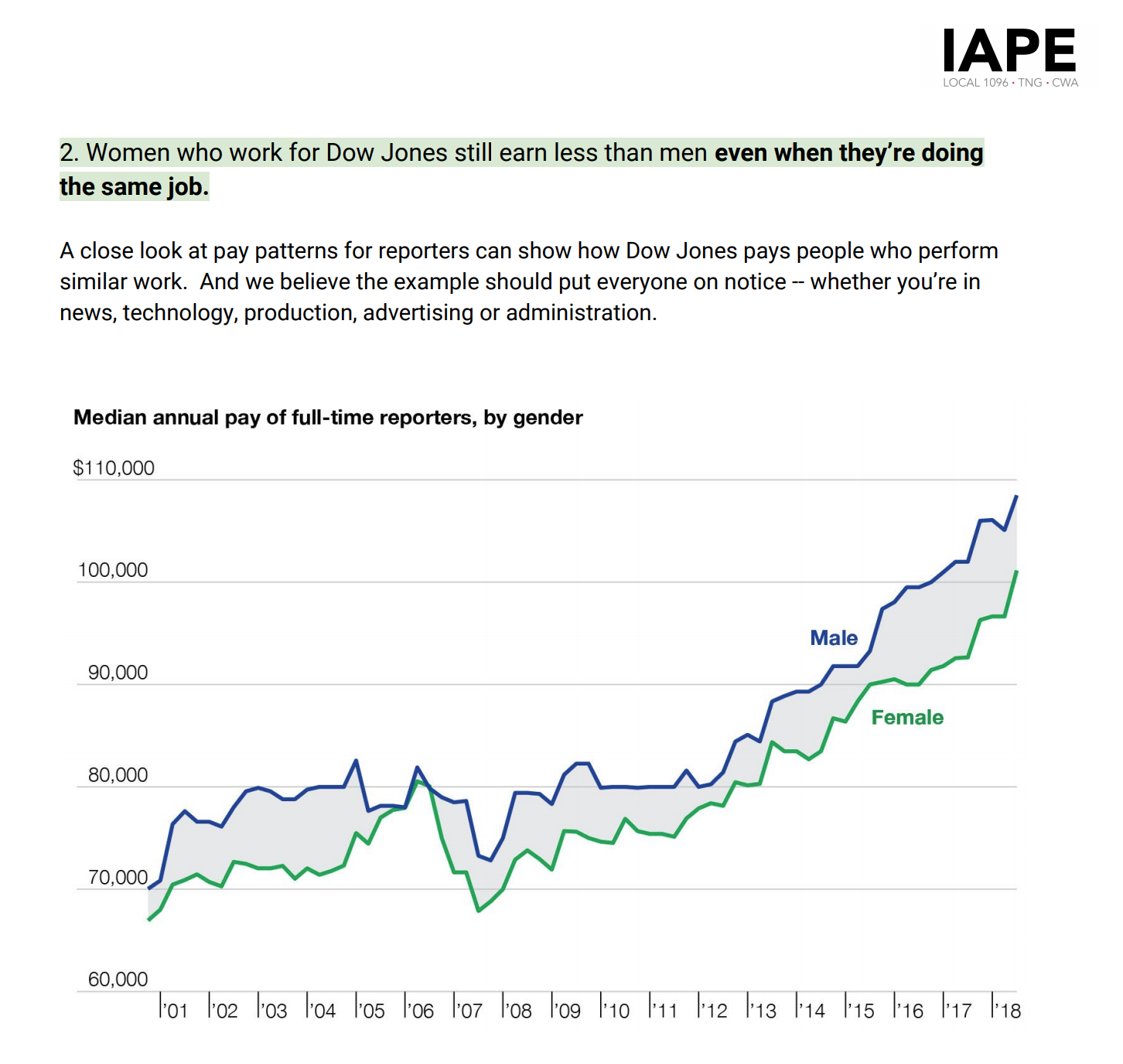 Feb. 26, 2019 – Women who work at Dow Jones media companies, including the Wall Street Journal, on average missed out on $2,000 in annual salary last year, compared to men, according to a new study that the union that represents the workers.

It’s just one example of what IAPE 1096 calls a “gender penalty” that exists for women at Dow Jones.

While acknowledging that the salaries between male and female employees have drawn closer, “IAPE believes there should be no penalty,” the union said. 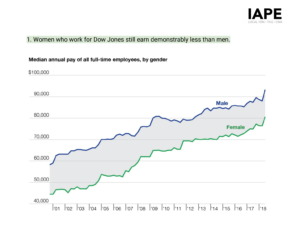 An external consultant, Strength in Numbers, conducted the study, using anonymous salary data provided by IAPE that included job title, gender, location, race and age (as a proxy for their experience).

Pay disparities also show up along racial lines. White reporters earned a median salary of about $108,000 in the second quarter of 2018. That’s nearly 17 percent more that reporters of color and compares with a 7 percent gap in the same period eight years earlier.

But only seven reporters identified as black and 16 as Hispanic in the 2018 quarter, out of 260 reports. Those small numbers prevent IAPE from making conclusions about pay equity by race with statistical certainty.

“Our analyses show that, however you slice it, Dow Jones pays its unionized employees in a way that results in women, as a group, getting less money than men,” the study said. “We also see that people of color are under-represented at the company in our single largest job title, that of reporter.”

The reasons for the pay differences aren’t clear, the report said. IAPE 1096 hopes to conduct another pay study in the future with the aim of answering that question.

Meanwhile, IAPE recommends that employees request a salary review from the union by emailing it confidentially. “We can tell you how your pay stacks up against other people’s, including people who have similar responsibilities, have a comparable number of years of experiences, or who work in your location, with gender breakdowns in many cases,” the union said.

Armed with that information and the charts in the study, employees can then go to managers for a salary review. Hundreds have already done that, and some may need to ask again, based on the latest numbers.

Dow Jones managers declined to answer specific questions about the study. Senior Vice President Colleen Schwartz said in a statement that Dow Jones is “fully committed to being a fair and equitable workplace” and that it continues to enhance compensation, hiring and advancement practices.