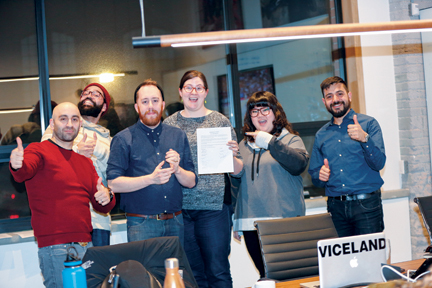 The first digital media company to be unionized in Canada ratified a contract on March 31 giving major gains in salaries and benefits, stronger equity provisions, and measures to protect editorial independence.

It is a first contract for the 170 VICE employees across the country, who joined CWA Canada’s largest local, the Canadian Media Guild (CMG), last June. Members voted 94.7 percent in favor of ratifying the three-year tentative agreement.

The agreement between the CMG and the global digital media giant was reached after nine months of intense negotiations.

Employees will see immediate wage increases ranging from 2 percent to 52.5 percent based on a negotiated salary grid, with an average increase of 9 percent. In addition, there are across-the-board annual increases of 2 percent in 2017 and 2.5 percent in both 2018 and 2019.

The agreement gives VICE interns a wage increase to $15 per hour. It is the first media contract in the country to include language regarding interns modeled on a policy drafted by CWA Canada’s associate members and adopted at the union’s annual National Representative Council meeting in April 2015.

“This first contract sets us on the right path here as workers at VICE,” said Maggie McCaw, a member of the negotiating committee. “We organized because we all agreed that the long hours, creative passion, and professional experience we were investing here were not being recognized fairly by management. This agreement ensures that everyone at VICE will be paid fairly for the work they do and will be treated with respect across the board — from interns all the way up to managing editors. It is an agreement that all of VICE staff and management can be proud of.”

CMG President Kamala Rao congratulated members for their determination and focus on tangible results that will improve their lives, both at work and beyond.

“CMG members at VICE have done what is required to make the improvements they deserve. They’ve pulled together in a union, our union, to strengthen their voices at work,” Rao said.

CMG worked with VICE and a pay equity consultant to review the compensation structure and recommend individual adjustments, which are being implemented as a result of the study. As a part of the new agreement, the CMG and VICE will continue to conduct periodic assessments to ensure pay equity is maintained.