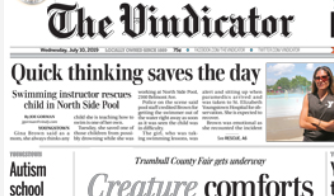 July 10, 2019 – The Vindicator’s June 28 announcement that it will close its doors in August – making Youngstown the nation’s biggest city without a daily newspaper – demands the attention of every journalist and every freedom-loving American.

As an article in the Philadelphia Inquirer notes, the Vindicator has played an important role in maintaining civility and democracy in Northeastern Ohio as far back as the 1920s, when its reporting helped oust the KKK from the region.

No more. Beginning in August, with no one to hold them to account, it will be open season for corrupt politicians, unscrupulous business owners and proponents of hate.

Without the Vindicator, who will tell the stories of the laid off auto workers of nearby Lordstown? Who will report on the neighborhoods and schools and businesses of Youngstown and the region? Who will unmask the lies of hate-mongers?

The NewsGuild-CWA was officially notified of the impending closure by the Vindicator’s publisher, in accordance with the  WARN Act, the day the information was made public.

And because workers at the Vindicator are represented by The NewsGuild, the local will have the opportunity to bargain over the effects of the closure and secure severance for its approximately 60 union members.

But severance pay is no substitute for a job. And it’s of little use to a city and a region that desperately needs truth-telling.

The demise of the Vindicator crystallizes the urgent need for new media strategies. The Pew Research Center reported in March that newspaper advertising has declined 67 percent since its peak in 2005. Meanwhile, tech giants like Google and Facebook, which offer no original news content, reaped as much as 60 percent of all U.S. digital ad revenue in 2018. At the same time, hedge funds like Alden Global Capital are stripping assets from their properties at the expense of journalists and news coverage.

Newsroom jobs have declined by almost half over the last 15 years and the term “news deserts” has taken hold to describe communities without local newspapers. This year the news industry has suffered the worst job losses since the 2008 Great Recession, despite very low employment generally.

Unfortunately, however, the Pew study found that more than 70 percent of Americans think their local news media are doing well financially. Educating readers about the state of the business clearly must become a priority.

Sadly, there is currently no proven business model for media on any platform – print, print-and-digital or digital-only. Even prominent online-only publications like BuzzFeed News and Huffington Post have endured staff cuts over the last year.

While some national papers such as the New York Times, the Wall Street Journal and the Washington Post seem secure, most local news organizations are struggling. Some regional papers appear to be strong, such as the Star-Tribune in Minneapolis and the Boston Globe, but most seem shaky.

Nonetheless, publications that deliver news in print and online are still the primary source for news throughout the country. Investment is urgently needed, but without a change in the business model it won’t always solve the problem. (The Orange County Register, for example, was purchased in 2012 by a New England investor who immediately added staff but who failed to adapt to the economic changes facing the new industry. Within four years the Register was bankrupt, re-sold and left with fewer journalists than before the original sale.)

For more than a decade, The NewsGuild-CWA has explored media policies that will encourage sustainable local journalism. We have participated in co-ops and employee stock ownership plans. We have sought out new owners in Denver, which was pillaged by Alden, St. Paul and other locales, but haven’t been able to persuade the hedge funds to let go.

Some responses are already taking hold. There are efforts to break up Google, Apple and Facebook using anti-trust law, although that could take years. ProPublica’s offer to expand its local reporting network to Youngstown, while admirable, cannot replace a full-fledged news publication.

There are also efforts to enact laws to encourage experimentation. Rep. Mark DeSaulnier (D-CA), whose district includes the area covered by the Alden-controlled Contra Costa Times, has introduced a bill that would allow non-profit media organizations to receive advertising income while remaining tax-exempt. Other politicians are considering tax credits and other changes.

But these are initial, exploratory steps. We believe it is time for industry leaders, analysts and workers to address the crisis in a more unified and systematic way.

Journalists are being attacked on all sides – forced to fight for their jobs, seek new owners, pursue new business models and sustain the attacks of politicians who benefit from calling great journalism “fake news.”

In the midst of the most challenging time for journalists since the Great Recession, throughout North America, journalists are unionizing in record numbers. The NewsGuild-CWA is committed to fight on all fronts for quality journalism and good jobs. Regardless of the platform, sustainable journalism must thrive if we expect democracy to survive.