The murders of Ahmaud Arbery, George Floyd, Breonna Taylor, and the blatant display of racism in the Central Park incident with Christian Cooper demonstrate, again, this grim reality. These names are not the first, and without a profound change in ourselves and this country, they will not be the last. 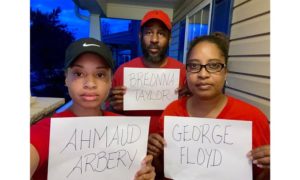 The CWA Executive Board is committed to moving beyond an endless string of reaction statements and demonstrating our continued commitment to justice for Black people through our organizing, representation, political, and movement-building work. We commit to creating dedicated spaces for open dialogue on race for our members and leaders to determine outcomes and clear steps the union must take to fight racism in the union, within the industries we represent and the community at-large.

There is no in-between. There is no neutral option. The only real way to dismantle racism and build the working-class power we seek is for every worker to take on the struggle for justice for Black people in this country as their own and to embrace the actions that “an injury to one is an injury to all” demands of us.

It is not enough to punish the perpetrators who have taken these Black lives. It is not enough to simply identify a “few bad apples” to fire or prosecute – a course of action which our deeply flawed legal system makes difficult to pursue. We must also do the hard, transformational work of rooting out racism in America’s consciousness and the institutions that uphold it.

This work is necessary because these incidents did not happen in isolation. They happened in the context of 400 years of structural and systematic anti-Black racism. They happened in the context of centuries of stolen labor; economic pillaging by corporate America of Black communities; underfunding of public schools and services; over-criminalization and incarceration of Black bodies; the use of police as military-like forces in poor, Black and Brown neighborhoods; outsourcing of good, union jobs; persistence of food deserts in urban areas; the treatment of addiction as a crime rather than a disease; the fractured, profit-driven health care system; and the “surgical precision” of Black voter disenfranchisement.

The only pathway to a just society for all is deep, structural change. Justice for Black people is inextricably linked to justice for all working people – including White people. The bosses, the rich, and the corporate executives have known this fact and have used race as one of the most effective and destructive ways to divide workers. Unions have a duty to fight for power, dignity and the right to live for every working-class person in every place. Our fight and the issues we care about do not stop when workers punch out for the day and leave the garage, call center, office, or plant.

If we are to make progress, we must listen to the experiences and stories of Black CWA members, Black workers, and the Black community. We must join together – every one of us – to dismantle this system of oppression. This means every White union member, Black union member, Latino union member and every ally, must fight and organize for Black lives. Thoughts and prayers aren’t enough. No amount of statements and press releases will bring back the lives lost and remedy the suffering our communities have to bear. We must move to action.