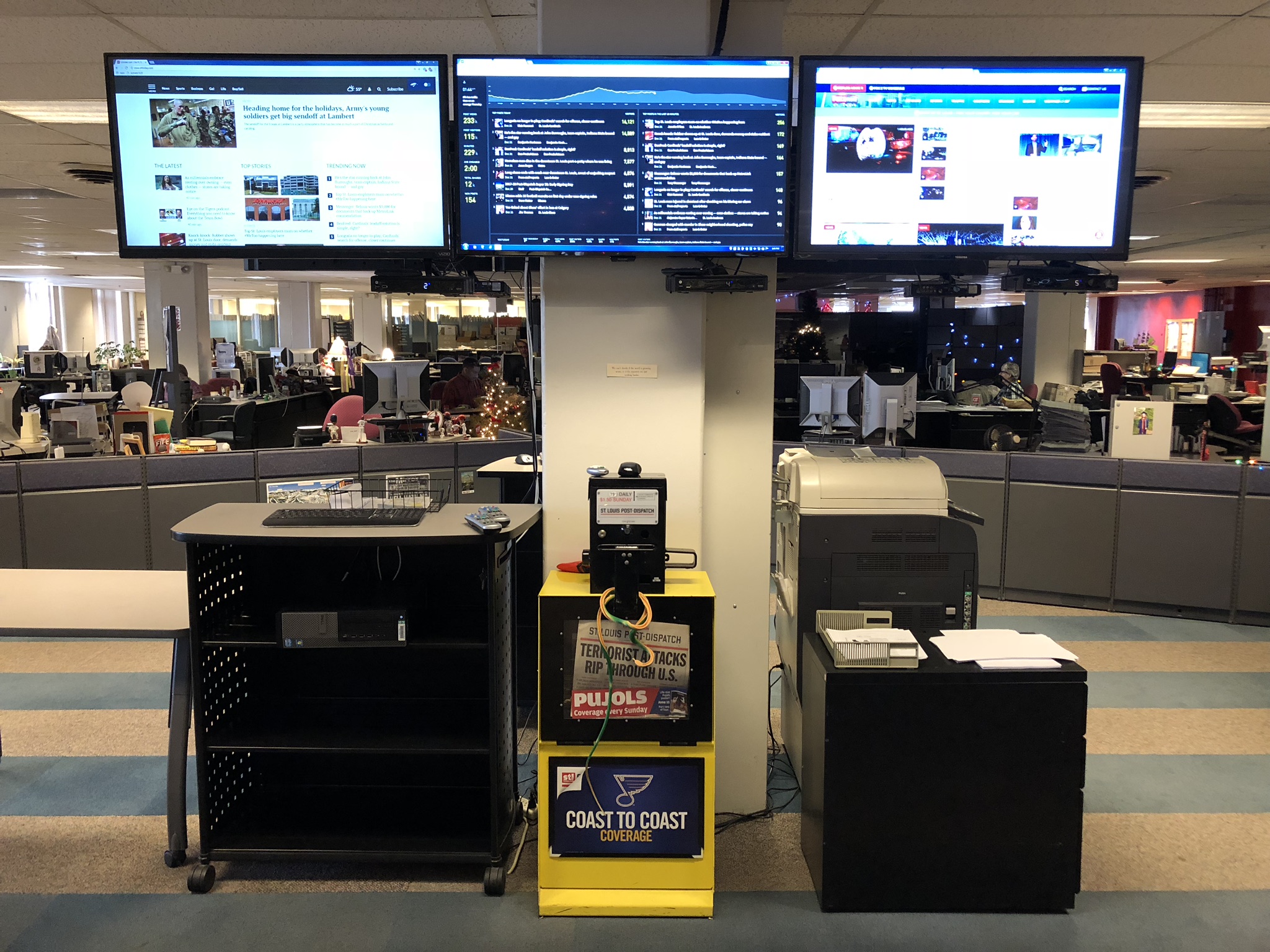 Feb. 23, 2018 – When sports reporter Jeff Gordon arrives at the office of the St. Louis Post-Dispatch, the first thing he sees is a monitor that lists stories based on their popularity or the number of clicks they receive.

And while the newspaper and its unionized newsroom don’t have any official click — or page view — goals, everyone wants their story at the top of the list.

“Every week, we get our Google analytics report,” says Gordon, president of United Media Guild, which represents workers at the Post-Dispatch. “It isn’t anything that’s direct pressure or quotas, but it’s always there — come up with things that are strictly designed to drive traffic.”

In interviews with The NewsGuild-CWA, reporters at union and non-union newspapers across the country talked about how page goals increase stress and kill morale. Many spoke anonymously for fear of discipline or termination if they publicly criticize their newspapers’ obsession with page view goals.

They complain of goals that are too high and require too many stories, given the severely reduced size of newsroom staffs. And they say the goals hinder quality journalism because reporters focus on stories that will get a lot of hits, such as those with a tangential connection to a celebrity or that include photos of animals. In the meantime, reporters say they’re abandoning or being told to abandon beats that don’t come with a deep readership.

“You take time from chipping away at that larger story to write smaller stories to keep you on track,” said a reporter who wished to remain anonymous.

But some reporters say their newspapers use goals in the right way — to delve into readers’ habits, find what they’ll read and present stories that appeal to the audience and are educational.

Anne Saker, staff writer at the Cincinnati Enquirer, a Gannett-owned newspaper, points to the Enquirer’s wall-to-wall coverage of Fiona, the baby hippo born at the Cincinnati Zoo, who has her own page on the newspaper’s website. While readers may click on the links because she’s cute, they also get a dose of information about biodiversity, conservation science and the bottle-feeding of Fiona, Saker says.

“I don’t know if we have the answers,” she said. “But I like our answers better than other answers. … I’m quite bullish on where journalism can go if we don’t lose our nerve.”

Reporters at other Gannett newspapers, however, say they’ve heard that pay is docked at some non-union papers if reporters don’t meet their click goals. A Gannett executive denied that claim during a staff meeting in October at the Knoxville News Sentinel.

Some newspaper leaders are using metrics wisely, says Ken Doctor, media analyst for Newsonomics, who singles out the Washington Post for the smartest use of metrics. Editor Marty Baron has made sure the Post doesn’t simply measure how many stories a reporter produces or how many page views he or she gets but is “also trying to understand how the story engages their readers, especially their subscribers,” Doctor said.

Freddy Kunkle, a Washington Post reporter and Guild unit chair at the paper, recognizes the inevitability of metrics. But it’s still difficult to use them fairly, he said.

“Every reporter would love to have the words ‘Trump’ and ‘Kardashian’ in the same story all the time,” he said. “That said, I think The Post has been shrewd in its use of metrics. We do look not just at page views or unique visits but engagement — how long a person has stayed with a story — to gauge what works and what doesn’t.”

Newspapers that analyze scroll depth — how far into a story someone reads before moving on to another story — and that focus on subscribers are the ones using metrics correctly, he said.

McClatchy describes its use of click goals as “newsroom reinvention,” designed to produce “journalism that makes a difference in our communities and resonates with our readers,” said Tim Grieve, the chain’s vice president for news.

The company is confident reporters will have no problems meeting their targets if they’re on the right beats.

But reporters at McClatchy papers say they’re overwhelmed by the pressure. Some editors have told reporters that they don’t believe the reporters can meet the goals, and no one seems to know what the consequences will be if they fall short.

“It’s impossible to find time for everything. … The pace right now is relentless and exhausting,” said a McClatchy reporter who wished to remain anonymous.

Recently, click goals became an issue in bargaining at a NewsGuild-covered newspaper. McClatchy hasn’t proposed any specific contract language at the Sacramento Bee yet — the company just says that salary will align with newsroom reinvention and that it will introduce metrics to annual performance reviews, said Ed Fletcher, the unit chair at the Bee.

“High click rates don’t equate to quality journalism, and metrics are not the solution to the problems plaguing the industry,” said NewsGuild President Bernie Lunzer. “What sells journalism is quality reporting and credibility. That’s what we must strive for.”

Back in St. Louis, the Post-Dispatch has added a “sweeps month,” where there’s an increased emphasis on meeting click goals, Gordon says. The easiest trick is a slide show, where readers click through slides accompanied by more ads than stories typically have.

Meanwhile, resources go to filling positions such as web producer or audience engagement specialist rather than adding a statehouse reporter or building an investigative team, he says. “That’s been whittled away.”

The NewsGuild wants to continue to document reporters’ experiences with click goals. Contact the author, Martha Waggoner, via email to Communications@newsguild.org to share your stories anonymously or on the record.

This is an edited version of a slightly longer article that previously appeared on this site.