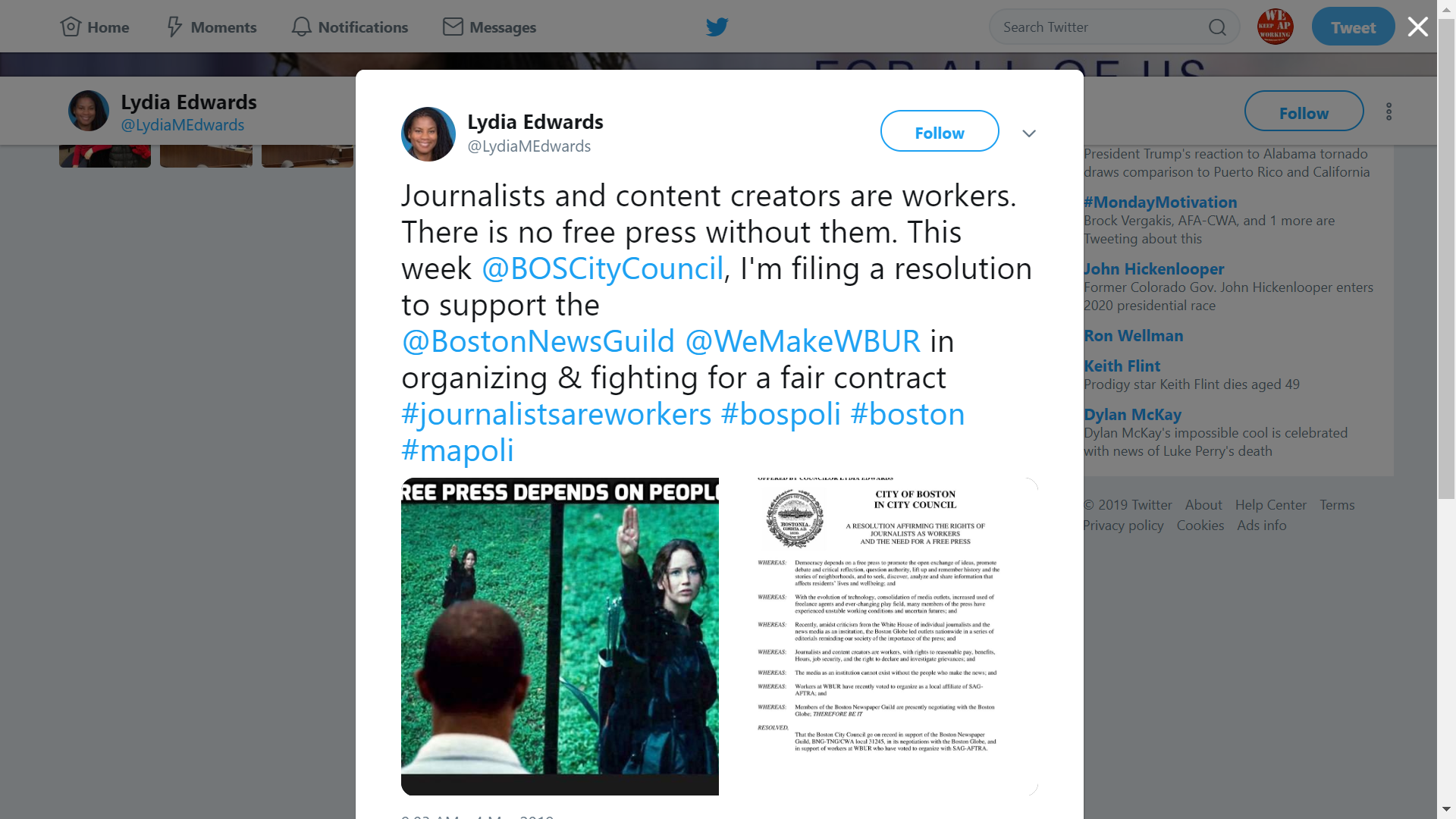 The Boston City Council approved a resolution backing a free press and the Boston Newspaper Guild, which is in the midst of tense negotiations for its members at The Boston Globe.

Council member Lydia Edwards, known for her support of workers’ rights, introduced the resolution Wednesday afternoon at the council meeting.

It acknowledges that journalists “have experienced unstable working conditions and uncertain futures.” It says that amidst White House criticism of the press the Boston Globe “led outlets nationwide in a series of editorials reminding our society of the importance freedom of the press.”

The resolution supports Boston Globe workers, whose local is part of The NewsGuild-CWA, along with  workers at WBUR, who just organized with SAG-AFTRA. The Boston News Guild represents about 300 journalists and business employees at the Globe.

“We appreciate the city council’s support of Boston Newspaper Guild members who are negotiating for a fair contract at The Globe.,” said Scott Steeves, BNG president. “The resolution is an important reminder that a free press is essential to maintaining a democracy. We move dangerously closer to losing our free press when newspaper owners turn their backs on journalists and other workers at places such as The Boston Globe.”

Edwards’ resolution says journalists and content creators have the right to reasonable, hours, job security and the right to declare and investigate grievances.”

“Journalists and content creators are workers,” Edwards said in a tweet on Monday, March 4, 2019. “There is no free press without them.”

The resolution resolves that the Boston City Council “go on record in support of the Boston Newspaper Guild, BNG-TNG/CWA Local 31245 in its negotiations with the Boston Globe and of workers at WBUR, who have voted to organize with SAG-AFTRA.”

Joel Wool, Edwards’ policy director, said Monday that while the resolution is symbolic, he suspects the Globe owners will notice. “We hope that they will,” he said. “Either way, we hope it is a morale booster for the journalists.”

According to her website, Edwards’ background includes working as a public interest attorney with Greater Boston Legal Services, where she focused on labor issues such as fighting for access to unemployment insurance, back wages, fair treatment for domestic workers, and combating human trafficking. She served as the statewide campaign coordinator for the Massachusetts Coalition for Domestic Workers, which advocated for the passage of the Domestic Workers Bill of Rights.

The Boston Globe named her the Bostonian of the year in 2015.

At the end of last month, the local wrote to the Globe’s owners, describing the law firm that newspaper is using as a mercenary firm that’s trying to force them to accept a contract that lacks basic protections, such as overtime and layoffs that rely on seniority. A day later, owner John Henry said the union characterized the company’s proposals incorrectly. He provided no specifics.

The letter went to Henry and his wife, Linda Pizzuti Henry, who’s the Globe’s manager director. The letter said the two saved the paper from “absentee owners” when they bought it in 2013 from the New York Times.

Because the union refused to accept “these draconian demands,” management attorney rescinded the offer of modest wage increases and a 401 (k) match, the letter said.