Members of The NewsGuild of Philadelphia from across the country have overwhelmingly ratified a new three-year agreement with Restaurant Opportunities Centers United.

Highlights of the agreement for workers from Philadelphia, New York, Washington, Los Angeles, Chicago and Oakland include a 5 percent pay increase, effective immediately, and 3 percent raises in years two and three. 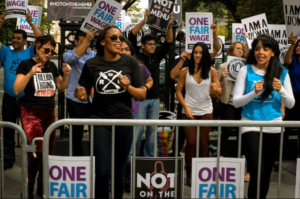 The contract includes: continued fully paid health care by the employer; nine personal days and 11 paid holidays; carryover of sick time from year-to-year, maxing out at 20 days; two weeks of severance pay for each year of service in the event of a reduction of force to a maximum of 12 weeks; and increases in cell phone and transportation costs monthly to $100.

Guild-represented members at ROC train and educate restaurant workers, and lobby for worker-friendly laws in major cities across the country.