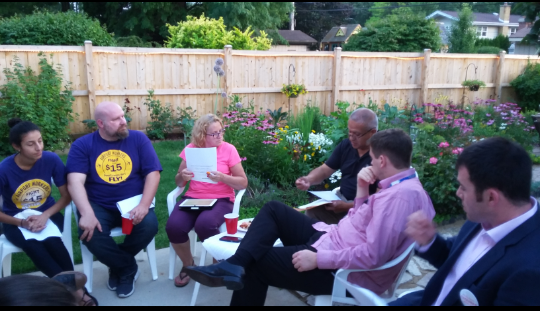 The regularly-scheduled meeting of the Chicago NewsGuild, held in President Grace Catania’s backyard, turned into an impromptu celebration when members learned the deal was closed.

“We’re flying high here,” said David Roeder, just days after the Chicago Sun-Times and the Reader were sold to an investment group led by former Alderman Edwin Eisendrath and the Chicago Federation of Labor. Roeder has been member of the Chicago News Guild for more than two decades and now serves as a consultant to the union.

The sale to Eisendrath and the labor federation was a long shot.

Early on, Tronc, the publisher of the Chicago Tribune – the Sun-Times’ bigger, right-wing rival – had the inside track to purchase the struggling papers. But the News Guild and others were adamantly opposed.

“We were against the sale to Tronc because we saw it as an imminent threat to the independence of the Sun-Times and to our members’ jobs,” Roeder said.

The Chicago News Guild challenged the sale, arguing that it would violate anti-trust regulations and urging the Department of Justice to seek out other bids.

Putting together an alternate group of investors who could raise the capital – and who were committed to continue publishing the Sun-Times and the Reader – was no small matter. The Department of Justice and the sellers required investors to place $11.2 million in escrow, enough to sustain the papers for a two- to three-year period. (The actual sale price was just $1.)

Fortunately, the union had laid some of the groundwork well in advance. “The Chicago Sun-Times was the historical heart of the Chicago News Guild operation,” Roeder said, but faced with ongoing cutbacks in content and declining subscription rates, union members had grown concerned about its future over several years.

A year and a half ago they reached out to Chicago Federation of Labor (CFL), which was also “alarmed by the trends in media ownership and wanted to help preserve vigorous and competitive journalism,” Roeder said.

Eisendrath had first considered buying the Sun-Times in 2016, but didn’t pursue the venture until Tronc signed a letter of intent for the purchase in May, according to an online report by Robert Feder.

“We worked very hard to get the group [of investors] together and to alert the Department of Justice to the importance of media competition in Chicago,” Roeder said, but the Guild itself is not an investor.

“Eisendrath and the CFL put in many long hours raising the money and negotiating the sale,” Roeder said. “This was a vital civic project, and they hope to show that a company can be turned around in cooperation with its workers.”

They were also motivated by a desire to give voice to Chicago’s working men and women more broadly.

“Great journalism in a great democracy means that the 99 percent should recognize themselves in what gets written,” Eisendrath told Feder.

“Our investors include more than half a million hardworking people around Chicago, and you can bet we’ll be talking with a voice that resonates with the working class,” he told the Sun-Times. “We’re going to organize around that to raise circulation.”

CFL Secretary-Treasurer Bob Reiter echoed that sentiment. “We’re very excited and look forward to an opportunity to help grow the Sun-Times as the working-class news organization of the City of Chicago,” he said.

The Chicago News Guild also worked to win support from the people, launching an online petition drive. Support for the Reader, a free, weekly alternative paper that focuses on the arts, music and politics – and is known for holding the mayor’s feet to the fire – was also an important factor.

“I think it’s a worthwhile challenge,” Brandt, the restructuring expert, said. “It’s a money-losing venture, but this is one of those things where you take a gulp and you do it for the good of the city. Chicago needs two newspapers.”

But the significance of the sale goes far beyond Chicago.

In an industry that’s been short on good news for more than a decade, the purchase of the Chicago Sun-Times and the Reader are cause for hope.

“It could be a template for organizing in other cities and looking at ways to ensure that the voice of the 99% is relayed through a responsible media outlet. I’d like to see this tried in other cities, absolutely,” Roeder said.

“It takes some people with vision, but if you’ve got a committed labor movement in a city and some committed individuals who want to put it together, I think it can be done.

“It will be a time for experimenting.”

Not Worried About Conflict

Guild leaders aren’t worried about a potential conflict of interest when negotiating with the labor federation.

“We’ll be dealing with other unions and we have experience doing that,” Roeder said, noting that the local represents the staff at several Chicago unions. “We’re used to being across the table. We’ve always bargained aggressively and the employers have too,” he said.

“We didn’t get involved in order to get a pass from reporters,” said Reiter, the secretary-treasurer of the Chicago Federation of Labor. “We got involved to protect the institution of journalism, but it’s not just about keeping the doors open. The Sun-Times is a historic paper and we’ve been given the opportunity to transform it.”

“The little guy won here,” said CFL President Jorge Ramirez. He is the chairman of the new company, and Eisendrath is its CEO.

Employees at the two papers “have been slapped around by events of recent years in the industry,” Roeder said, and now they are very hopeful and excited.

“They see some good decisions being made already,” he added.

The new owners are moving the papers out of very expensive office space in downtown Chicago and getting into a lower-cost space in a hip, trendy area just outside of the central business district. The new space will be shared with Answers Media, a digital firm Eisendrath purchased as part of the deal, with the intent of strengthening the Sun-Times’ online operations.

“We look forward to it,” Roeder said. “We hope we can suggest some ways for other people to do this.

“We’ve all faced so many setbacks, so many difficult negotiations. This was a great win.”