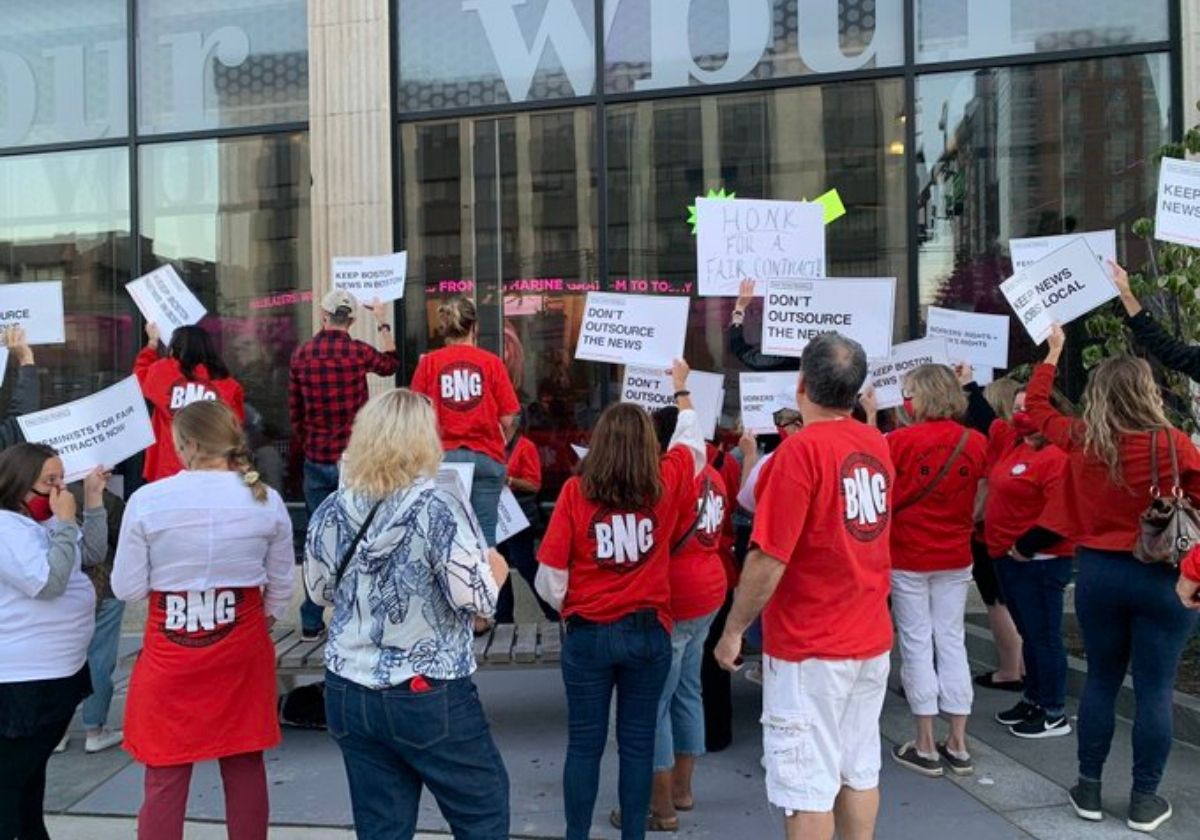 Members of the Boston Newspaper Guild upped the ante in their fight for a fair contract on Monday, protesting Globe owner Linda Pizzuti Henry outside a panel honoring “women news leaders.” The panel was sponsored by radio station WBUR, an NPR affiliate, and also featured feminist icon Gloria Steinem.

“Tonight, our CEO is participating in a panel on trailblazing women in media, nearly 1,000 days since our contract expired,” tweeted Guild member Kevin Slane. “You know what would be pretty ‘trailblazing?’ Treating your employees with dignity so they don’t have to sit outside a window to make their voices heard.”

When moderator Robin Young, who cohosts NPR’s Here & Now, asked Pizzuti Henry about the protest, she responded that the panel wasn’t the place to discuss labor issues and said, “I’m not interested in making news.”

Workers are fighting to preserve job security protections, including limits on outsourcing, “just cause” in discipline and seniority rights. But, they say, Globe owners Linda Pizzuti Henry and John Henry have “spent three years and hundreds of thousands of dollars battling to take away these longstanding protections.”

In an open letter to Steinem before the event, workers wrote, “Despite witnessing our dedication and professionalism daily throughout this pandemic, likely to be the biggest crisis of our lives, our owners continue to fight us over basic workplace rights.”

“Many Globe journalists have left the company in recent years, troubled by the owners’ attempts to strip away the heart and soul of our union,” they said.

The protest was the latest in a series of public rebukes of Globe management. On Friday, Globe employees called out the Henrys, who also own the Boston Red Sox, handing out free scorecards at Fenway Park that said the Henrys are “striking out at the Boston Globe” and urging Red Sox fans to help us save the iconic publication.

After nearly three years of contract negotiations, Globe employees have begun laying the groundwork for a strike vote should management fail to resolve the dispute.