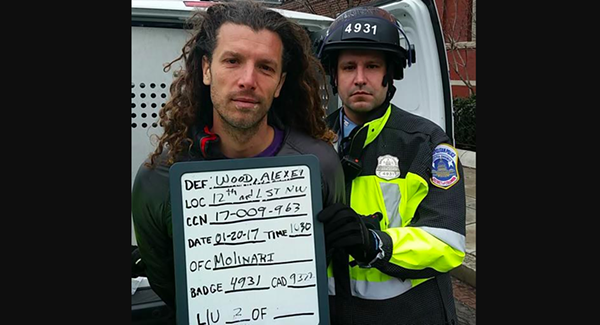 Feb. 23, 2018 – Press freedom advocates won an important victory when photojournalist Alexei Wood was found not guilty of charges stemming from Inauguration Day protests. Five other defendants were also exonerated, and charges were subsequently dropped against 129 others who were awaiting prosecution.

But charges are still pending against 59 people, including Aaron Cantú, a freelance journalist now working for the Santa Fe Reporter. His work has appeared in The Nation, The Guardian, The Baffler and VICE News.

Cantú is facing eight criminal charges, including multiple felonies, which carry a penalty of 10 years in jail and a $25,000 fine. Trials for the remaining 59 defendants are expected to resume in April.

More than 200 people, including eight other journalists, were arrested on Jan. 20, 2017, after windows were smashed.

In her opening statement at the trial of the six defendants who were acquitted in December, Assistant U.S. Attorney Jennifer Kerkhoff admitted there was no evidence they engaged in acts of violence, but said the government considered the entire group of protesters responsible for those acts.

Being near a newsworthy event is not a crime, lawyers and press freedom advocates argued.