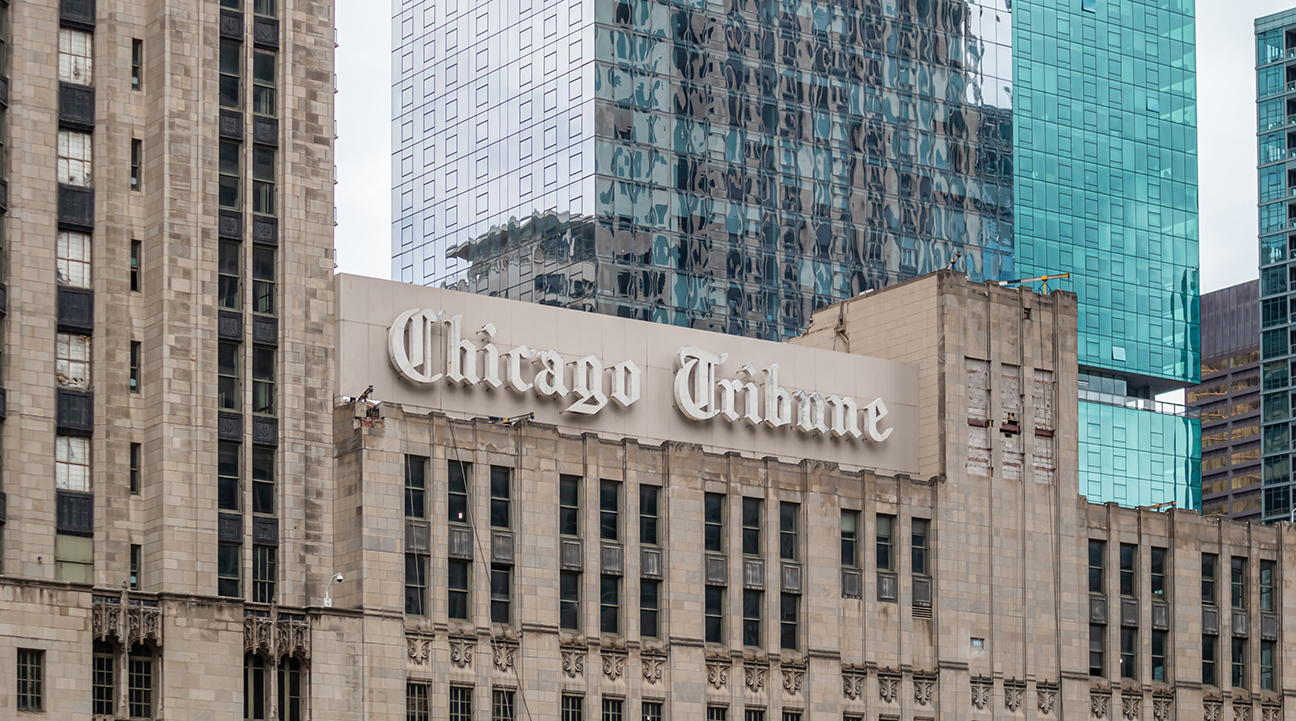 One year ago, the vulture hedge fund Alden Global Capital bought nearly a third of the stock in Tribune Publishing, one of the nation’s most venerable newspaper chains, owner of the Chicago Tribune, Baltimore Sun, Orlando Sun-Sentinel, the Hartford Courant and others.

Since then, the changes in Tribune have been swift and devastating.

Alden, which also owns the MediaNews Group chain (or MNG, formerly Digital First Media), has all but taken charge of Tribune. The hedge fund has left its classic stamp of profiteering across the news chain’s operations — letting Tribune’s digital efforts flounder where other chains have thrived, shutting down newsrooms and offices after defaulting on rent, slashing reporter and other staff pay during the pandemic crisis, and now being sued by shareholders — all while Alden’s officers on the board are handsomely rewarded for this “performance.”

Alden began the year placing two of its own on Tribune’s board, later adding Alden founder Randall Smith to create a new seven-member Tribune board. It gained these seats and the power that comes with them in exchange for a “standstill” agreement not to buy more shares before July 2021.

But that agreement has loopholes that still allow Alden to seize majority ownership of Tribune if the opportunity arises. Executives at Alden’s other chain, MNG, told employees last summer that, despite the standstill deal, it could acquire greater control of Tribune as early as January. In a presentation slide to staff, the executives said MNG and Tribune were “pushing our strategies closer together.”

Since then, however, MNG managers have indicated to staff that Alden will now likely wait till July to make its big move.

Either way, Alden’s intentions to fully merge with or acquire Tribune have been made clear. As a result, what was a largely debt-free, robust company one year ago is now being decimated, just as Alden’s other newspapers have been.

So what exactly has Alden done to Tribune during the past year?

Blowing it on the digital side

Since the pandemic-related shutdown began, nearly every news organization in the US has seen a significant “COVID bump” — a huge jump in digital subscriptions as a public eager for information has flocked to locally focused online news sites. Along with those subscriptions has come increased online ad revenue, too.

Alden’s own MNG papers have seen such a large jump in online subscriptions that it reversed its formerly anti-digital approach and told staff the added revenue would overcome recent print ad losses in less than two years. MNG’s digital advertising has also increased, internal company reports show, and it recently signed on to a new Washington-Post digital ad delivery system called Zeus Technology.

Yet under Alden’s watch, Tribune has fared terribly on the digital front.

Tribune’s digital subscriptions, though growing, remain low compared to other newspaper companies, indicating its digital operations were underdeveloped when the pandemic struck. And it hasn’t nearly caught up to publications such as The New York Times and The Wall Street Journal, which for the third quarter of this year show 6 million and 2.4 million digital subscribers, respectively. The Gannett chain now has 1 million digital subscriptions, compared to Tribune’s paltry 400,000.

“The State of Journalism at Tribune Publishing” is a report from the NewsGuild, which represents workers at both Tribune and MNG newspapers. The Guild surveyed Tribune employees about the direction and future of their news organizations, and several described the company’s problems transitioning to digital.

“We’ve talked a lot about focusing on digital subscriber growth and have achieved some success,” an employee at the Chicago Tribune wrote. “However, those efforts don’t seem to have been accompanied by enough growth in online subscription and advertising revenue to offset losses in other areas.”

A worker at the Hartford Courant said, “We’ve had a lack of institutional support for trying new things. For example, podcasts and newsletters have little backing and are set up to fail before they get off the ground.” As a group, 83 percent of the survey’s respondents found “negative concrete changes” and that the quality of coverage has suffered since Alden came aboard.

One employee from The (Allentown PA) Morning Call wrote: “We are stuck using a website that was already pre-formatted and the design is horrible…Digital subscribers complain endlessly their logins don’t work, the website constantly refreshes in the middle of stories, ads sit on top of text, and more ads on top of those ads, etc. It’s not user-friendly and it’s not a good experience. They just won’t take the time to listen to reader feedback or fix anything wrong with the site.”

This lack of online innovation jibes with Alden’s anti-digital strategy that became public when it failed to take over the Gannett chain more than a year ago. Alden attacked Gannett’s digital expansion plans, saying it would “optimize the company’s cost structure” (i.e. slash salaries and resources) and pushed Gannett to “commit to a moratorium” on digital advertising investments.

Defaulting on rent and other cost slashing

As its executives have told MNG staff in private meetings, Alden’s cost-slashing approach to newspapers has bled over into Tribune’s operations. In fact, Tribune’s total operating expenses have dropped 20 percent over last year, according to its third quarter report.

Yet the company saw a rise in net income of $1.6 million over last year, which CEO Terry Jimenez attributed to the “aggressive cost discipline.”

So where is the company saving all this money? In the newsroom, for starters. Tribune began the spring with mass unpaid furloughs across its papers, even though it had paid $9 million in shareholder dividends in March.

“We have members who are selling plasma to help pay for their groceries and their bills,” Tidewater Guild president Sara Gregory told NPR at the time.

During the first three-quarters of the year, Tribune reduced staff by nearly 650 positions. Since the end of the third quarter, the company also announced it will contract out printing at the Hartford Courant — a loss of another 148 jobs.

Tribune says it has “modified” 14 building leases around the country, and in fact has permanently shuttered five of its newsrooms. It’s now being sued for default by several building owners for failing to pay rent.

Alden now appears to be doing something similar with MNG’s East Bay Times offices in Northern California. Employees, most of whom have worked from home during the pandemic, are told they have until Dec. 8 to remove their belongings from the newspaper’s Oakland and Walnut Creek offices. The company said in an Oct. 29 email that it plans to find smaller, temporary spaces to rent, but to date has not done so.

“Our concern is that when it is time to go back and it’s safe to do so, they have a place to go to,” said NewsGuild member Annie Sciacca. “Are they going to close the newsroom permanently?”

Alden has already shut down or consolidated MNG newsrooms in Pennsylvania and Massachusetts, most recently moving The Boston Herald’s offices to much smaller quarters in Lowell, Mass.

Yet while Tribune was holding back rent and furloughing staff, it still managed to pay out a nice nest egg to Randall Smith, Alden’s founder and newest Tribune board member. On Nov. 2, Tribune Publishing gave Smith 10,093 Tribune shares — worth $116,675 — as payment for serving on a board seat gleaned as part of Alden’s takeover, a Securities and Exchange Commission filing shows.

Throughout all this, Tribune’s stock price outperformed its two leading competitors, the Gannett and Lee chains, as well as the Russell 2000 Index of small-capitalization American companies, which includes Tribune.

This year, Alden also invested heavily in pandemic-affected stocks, buying more than $85 million worth of shares in airlines, casinos and gaming interests at the start of the shutdown in March.

It has since sold most of these stocks after they recovered value. Alden is now investing in oil, coal and media, including $21.23 million worth of shares in Sinclair Broadcasting. Alden currently has $275.4 million invested in publicly traded US stocks. That’s down a bit from its March 2020 holdings of $316.8 million, but still more than the $193 million in assets it managed on December 31.

In the past, the hundreds of millions of dollars used to make some of these outside investments were directly siphoned from MNG newspapers, a fact we only know because Alden was forced to admit it in court filings.

So how much, if any, of the $275 million now tied up in stocks was extracted from Alden’s newspapers? We may never know.

Meanwhile, Alden’s shadowy real estate arm, Twenty Lake Holdings — which mainly exists to sell off newspapers’ buildings and land — has procured a $70,000-per-month lease (plus “utilities and other expenses”) from the city of Memphis after the Commercial Appeal newspaper building was converted into an emergency COVID hospital.

The $51.3 million renovation was paid by state and federal funds, according to the Commercial Appeal.

Still, despite Alden’s unrelenting Tribune-takeover trajectory, more than a few opponents are putting up a fight.

Two documentary projects are in the works that will help educate the public about Alden and its impact on the future of local news. (You can view the trailers here and here. Disclaimer: your truly has been interviewed for both of them.)

And at least two provisions of Alden’s arrangements with Tribune’s board have come under attack by shareholders in Delaware’s Chancery Court. A lawsuit was filed in August by the Vladimir Gusinsky Revocable Trust (there is a Russian media mogul of the same name, but it doesn’t appear he and the trust are related).

The shareholders are asking for class-action status, implying that parts of Tribune’s arrangement with Alden hinder their ability to buy more Tribune shares without invoking a so-called “poison pill” that would allow Alden to break its standstill agreement. The complaint calls the deal “an extremely aggressive overreach of corporate power.”

Alden is not named in the filings, but two of its three anointed board members are (the suit was filed just before Alden’s Randall Smith joined the board). If the case goes to trial, it will not likely be until March, according to court filings.

Tribune’s second-largest shareholder, the billionaire bioscientist and LA Times owner Dr. Patrick Soon-Shiong, is not a party to the suit. He has not commented publicly on Alden’s arrangements with the board, nor on the imminent takeover prospect.

Tribune employees are also fighting back with a grassroots effort to find local buyers who will help convert some Tribune papers to community-based nonprofit news organizations.

In June, NewsGuild journalists representing 10 Tribune publications across the country launched a collective campaign to return those institutions to local ownership.

Union members at The Capital Gazette, The Chicago Tribune, The Hartford Courant, The Morning Call, The Orlando Sentinel, The Virginian-Pilot and other papers are seeking local investors who “recognize that local newspapers are vital community institutions,” according to the campaign, which is running parallel to The Baltimore Sun Guild’s Save Our Sun campaign, launched in April.

Elected officials in communities ranging from Denver to Chicago, Allentown and Hartford have endorsed these efforts, all calling for Alden to sell to civic-minded local owners if it’s unwilling to reinvest in its newsrooms.

It’s a formula that has worked before. In 2016, a group of local investors bought the Berkshire Eagle from Alden, and the paper has survived and even thrived in the years since. As one of those investors, retired judge Frederic Rutberg put it. “I realize we’re stewards of an important organ of community life.”