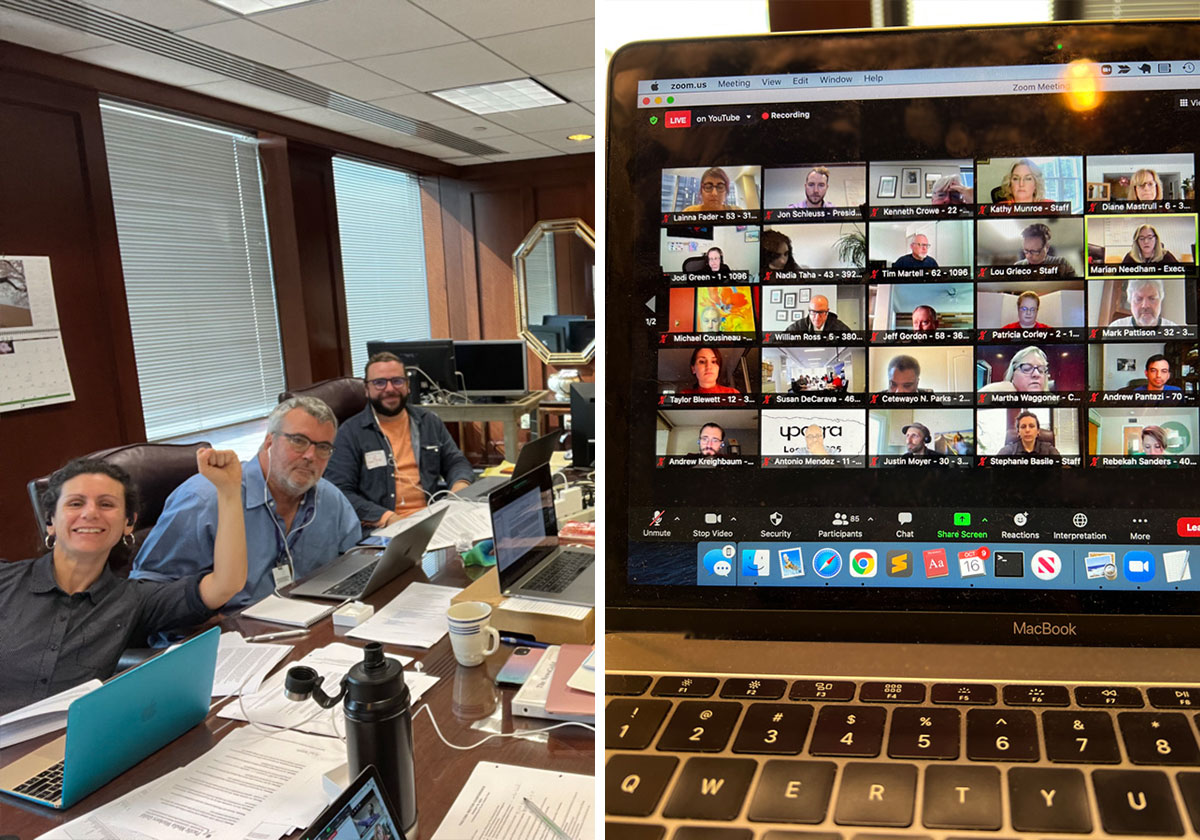 Most folks are not usually interested in a six-hour zoom call, but the 2021 NewsGuild-CWA Sector Conference was a lively affair, having been moved to a digital conference along with the CWA Convention, which began today.

The conference opened with videos from members from across the Guild talking about why they’re proud to be in our union. Top officers, myself included, then gave speeches. During my speech I unveiled our new logo, which looks back to our original union emblem.

What’s clear is just how rapidly our union is expanding in North America. I recited a list of 22 worker-led unionization campaigns since our last conference in January 2019 and yet there were still more than 80 others I didn’t have time to name. Since the last conference, 4,658 workers have built organizing drives and joined The NewsGuild. (There was a dancing lizard to celebrate.) The conference, the supreme authority in our union, adopted sweeping changes to the way we run elections for international office. These better enfranchise members by using a third-party agency to mail ballots to every member, nominating our election committee in off years (those folks were also elected) and fleshing out more clearly what an Organizing Member is for the first time in our union’s history. They’re great changes that make things more explicit in our constitution (which will be updated soon).

Dan Gabor, who’s president-elect of the Washington-Baltimore News Guild (TNG-CWA 32035) was elected by acclamation to serve the remainder of the term for the Region 2 Vice President. Dan’s been a member of the Guild since 2016, working at the AFL-CIO as a senior data coordinator. Follow Dan on twitter @dan_gabor or contact him at dan.m.gabor@gmail.com.

There was a very good discussion on whether we should work to establish a voluntary dues rate for Organizing Members, those workers fighting for a first contract. By default, no new member pays dues until their unit has ratified a contract. During the negotiating period, these members are left without a voice in regional and international elections. Members can pay dues voluntarily, at rates established by their locals. Delegates submitted a timely resolution before the conference calling on a new voluntary rate to be established for Organizing Members. Last week legal counsel ruled that it was out of order. The resolution was withdrawn before the conference and the Executive Council decided to investigate the possibilities and report back to our members.

There was also really good debate over five other resolutions presented to the conference:

Towards the end, officers and staff presented reports on collective bargaining, our resources, organizing and more. They also presented In Memoriam, a tribute to NewsGuild-CWA members who have passed away since 2019.

I left NewsGuild leaders with a remark we often said to each other as staffers when we were organizing at the Los Angeles Times in 2017:

We have more power than we know.