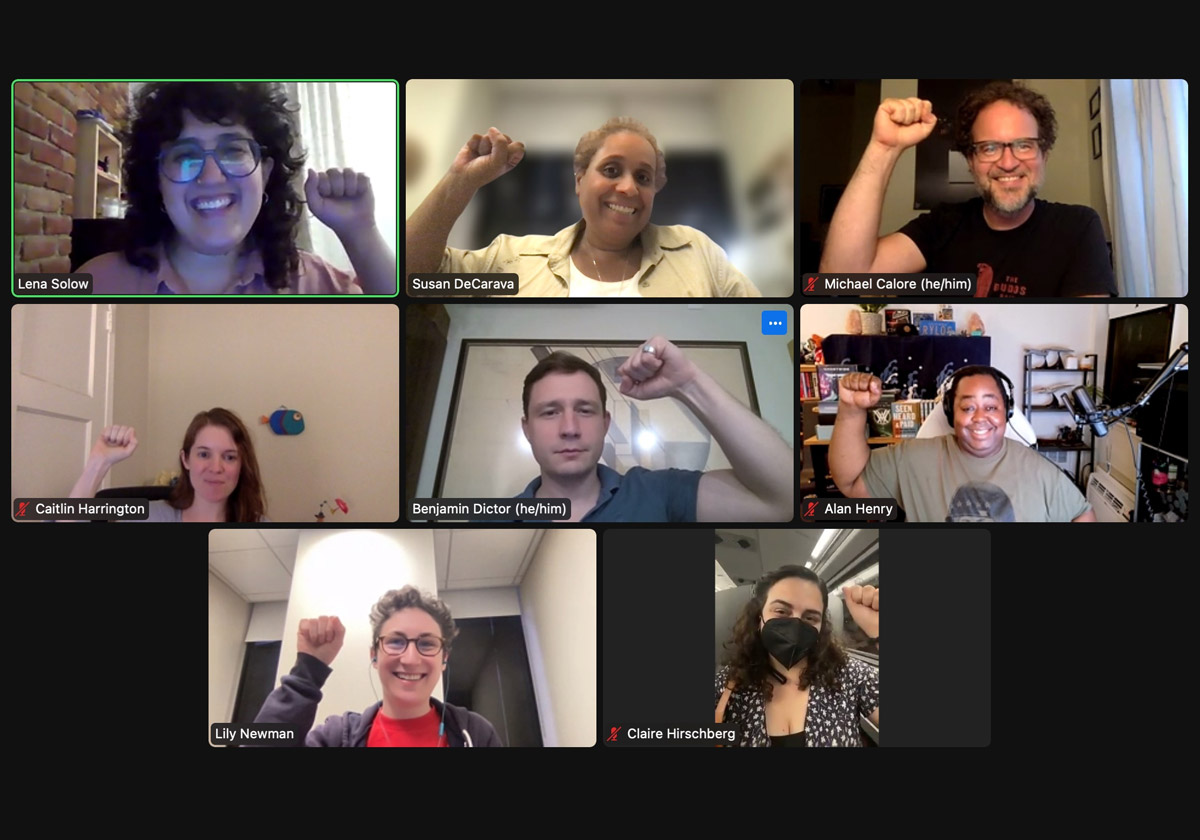 Union members, leaders and staff celebrate on Zoom after winning a first contract.

The WIRED union, a unit of The NewsGuild of New York, which represents more than 55 workers at the technology magazine, reached an agreement on a first contract with management late Monday night. The culmination of nearly 14 months of bargaining, the agreement allows the company to avoid a planned strike on Amazon Prime Days, July 12th and 13th, two of the most lucrative traffic days of the year for WIRED Magazine. More than 95% of the unit had signed on to walk off the job this morning.

Workers took the WIRED Union public with 85% support in April of 2020, joining media workers at The New Yorker, Ars Technica and Pitchfork in the ranks of unionized Condé Nast publications. This past March, around 500 more workers at Condé Nast, including at storied publications such as Vogue, GQ, Allure, and Bon Appétit also unionized with The NewsGuild of New York as Condé Nast Union.

“It shouldn’t have taken the threat of a strike for Condé leadership to finally reach a deal, but we’re so excited to have finally won this recognition and commitment from management,” said Lily Hay Newman, the WIRED Union Unit Chair. “We look forward to ratifying this contract and ensuring that WIRED is a viable, fulfilling place to work for years to come. WIRED workers have always deserved a real seat at the table and compensation that reflects the value of our work. All of our colleagues at Condé Nast deserve that.”

WIRED Union will vote to ratify a final agreement in the coming weeks, after which contract details will be made available.

“Workers at WIRED showed that when you organize around the issues that matter most in your workplace, it strengthens your ability to make meaningful and lasting change,” said Susan DeCarava, President, NewsGuild of New York. “We’re all so inspired by our members at Condé Nast who are transforming the company, and the media industry, for the better. The entire NYGuild is looking forward to supporting the positive changes our newest members at Condé Nast Union will bring to their workplace.”

🤖🚨WE HAVE AN AGREEMENT🚨🤖 We bargained into the night and we’ve REACHED A DEAL! Thank you for all your support and solidarity. Feel free to click away @WIRED on Tuesday and Wednesday for Prime Day. @wiredunion forever…when we fight, WE WIN!✊ pic.twitter.com/zP0f9olO7S