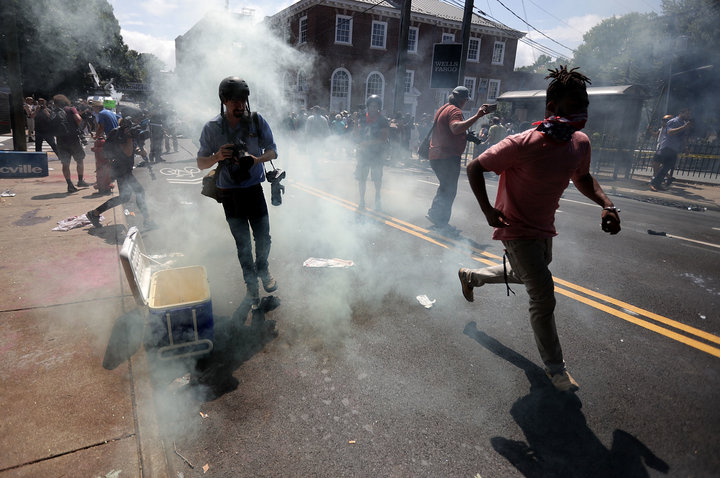 This Opinion Column appeared in the HuffingtonPost on Feb. 15, 2018.

Feb. 15, 2018 – Taylor Lorenz was covering the white nationalist rally in Charlottesville, Virginia, for The Hill newspaper last August ― and had just captured video of counterprotester Heather Heyer being struck and killed by a car ― when she herself was knocked to the ground.

Jacob Leigh Smith, of Louisa, Virginia, approached Lorenz and started yelling at her to stop recording. “I showed him my press credentials,” Lorenz later told the Charlottesville police. But he continued screaming, she said, and “he came up behind me, punched me in the face [and] I fell forward.” Smith then tried to kick away the phone Lorenz was using to record the event.

For the act of injuring a reporter in order to impede coverage of a news event, Smith was charged with misdemeanor assault and battery. He pleaded guilty, and his punishment was a suspended jail sentence of 270 days, 80 hours of community service and anger management classes.

But at least Smith faced a judge. During a March 2017 demonstration by Trump supporters in Huntington Beach, California, three staff members of OC Weekly covering the event were assaulted. Then-editor Gustavo Arellano later wrote that California State Parks police “stood by and did nothing” at the time of the attack and then failed to respond to his requests for a follow-up investigation.

Physical assaults against newsgatherers have one ultimate purpose: to control what stories are told and who tells them.

More than ever, the men and women who cover the news in the U.S. have targets on their backs, and those who go after journalists too often face little to no consequence for their crimes. That is true even though an assault on a reporter is not just an attack against an individual but an attack on a core foundation of our democracy. It is about time the law treats it that way.

Rep. Eric Swalwell (D-Calif.) has just introduced a bill, the Journalist Protection Act, which would require law enforcement and courts to treat assaults on reporters with the seriousness they deserve. The legislation would make it a federal crime to intentionally injure a journalist engaged in newsgathering.

The United States is facing a toxic political atmosphere fueled by such pronouncements as President Donald Trump’s labeling of the news media as “the enemy of the American people.” In 2017 the U.S. Press Freedom Tracker, an initiative supported by a consortium of media organizations, chronicled 44 attacks against journalists in this country. These attacks came from both the left and the right, and a disturbing number were launched by politicians and law enforcement. Even the international community is taking note: Last April, Reporters Without Borders lowered the United States’ ranking on its annual World Press Freedom Index.

Physical assaults against newsgatherers have one ultimate purpose: to control what stories are told and who tells them. The First Amendment was written to establish that no governmental authority or enraged zealot gets to make that call.

Every day ― whether on a TV newscast, in a newspaper dropped at our doorstep or on a digital news site ― we get a reminder of just how vital a free and independent press is. The nationally known journalist covering the White House and the local city council reporter each play a vital role in keeping our citizens informed and our democracy accountable. Protecting them from violent assaults, and punishing those who make such attacks, is one of the most important things we can do for our country and for ourselves ― and the least we can ask of our Congress.

Bernie Lunzer is president of the NewsGuild-Communications Workers of America.