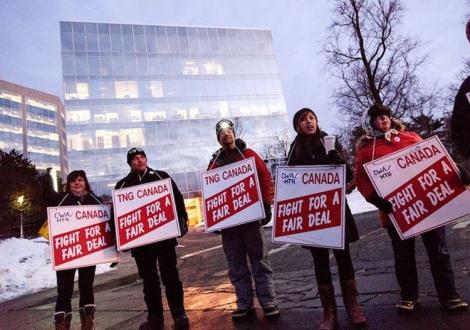 Solidarity on the picket line has enabled 55 Chronicle Herald strikers endure a second consecutive winter on the picket line in Halifax, Nova Scotia. The CWA Canada Halifax Typographical Union began the walkout January 23, 2016, when management was about to impose union-busting working conditions and threatened a lockout. The take-it-or-leave-it negotiating stance by the company is an blatant attempt to split the strikers into the haves and have-nots. It has not worked and on Feb. 9, the company refused to continue to bargain.

The strikers have agreed to many concessions from their old contract and were bargaining over other changes when the company demanded the bargaining team agree with its latest offer and refused to bargain individual issues. In a speech to strikers and supporters on the one-year anniversary, CWA Canada President Martin O’Hanlon promised CWA Canada support will be “Louder, stronger, harder!”

The province-wide rallies were held in six communities and were supported by many labour groups. In Halifax, Sydney, Antigonish, Yarmouth, Bridgewater and the Annapolis Valley, hundreds of supporters and activists, politicians, journalism students, and union members turned out to support the strikers and to demonstrate against union busting in Nova Scotia.

Visit Local Xpress, the news site started by the newsroom and news bureau staff of the Halifax Chronicle Herald who were forced out on strike Jan. 23, 2016. To keep up with the latest on the strike and activities, see Facebook or Twitter.