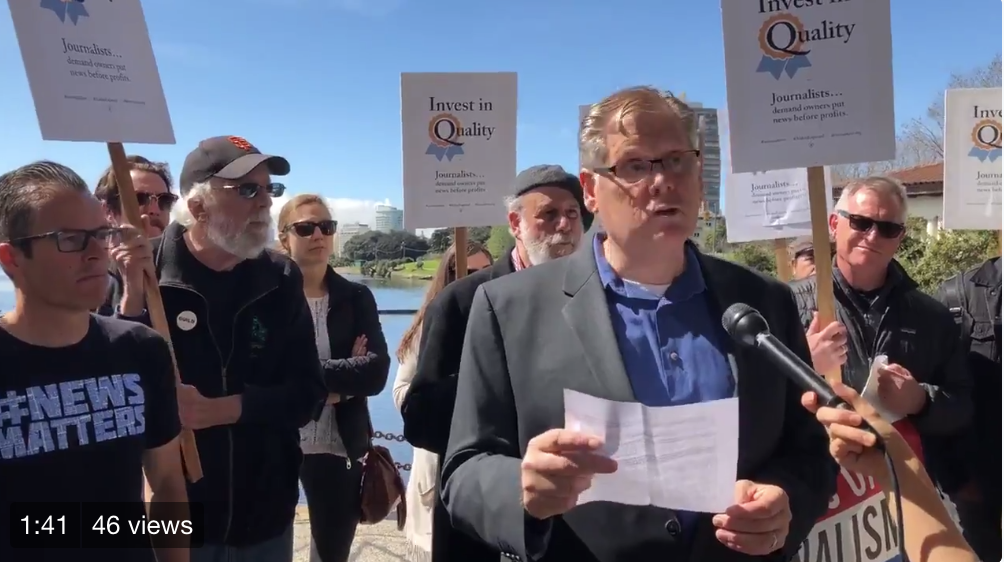 March 8, 2018 – A group of prominent Bay Area journalists – including Pulitzer-Prize winners from the East Bay Times – have denounced “the ongoing destruction of our newsrooms” by the company’s owners, Alden Global Capital.

“We are distressed by the loss of valued colleagues, forced to depart in repeated rounds of layoffs ordered on behalf of Alden,” the group said in a statement. Alden is the majority owner of Digital First Media, the nation’s second largest newspaper chain, which includes the Bay Area News Group (BANG). According a fact sheet published by DFM workers, in the last two years, union staff at 12 DFM papers has been cut by more than 40 percent.

“Some of the deepest job cuts came just days after we won the Pulitzer. And the layoffs continue to this day — with more to come,” said Thomas Peele and George Kelly, Pulitzer winners and co-chairs of BANG’s East Bay Unit of The NewsGuild-CWA.

The team won the 2017 Pulitzer Prize, journalism’s highest honor, for breaking news coverage of the deadly Ghost Ship Fire in Oakland. Lisa Krieger and Karl Mondon, co-chairs of Mercury News Guild Unit, also signed the statement. The group’s condemnation of Alden’s stewardship was echoed by supporters at other newsrooms controlled by hedge fund.

The public denunciation “is an unprecedented action on the part of some of the best working journalists in the country, demanding owners who will invest in quality, and stop putting profits first and community interests last,” said Carl Hall, executive officer of The NewsGuild-CWA’s Pacific Media Workers local.

“We understand that a business needs to make a profit,” the journalists said. “But the broad industry trends are not what’s driving corporate-level strategy at Digital First Media. DFM is profitable. It’s just not been profitable enough for Alden Global Capital.

“Alden’s slash-and-burn policies are gutting newsrooms, undermining the public trust upon which communities deeply depend. Make no mistake; these cuts are not the doing of local managers across the country. They are the fault of Alden’s leaders, whose actions are repeated attacks on democracy by destroying newspapers meant to be a check on government and corporate power.”

The company is making money, the group noted. “Your company continues to outperform its peers in virtually​ every​ category,” DFM COO Guy Gilmore wrote in a company-wide email last month.

Alden’s goal, according to a respected news industry analyst, is to extract maximum profits before shutting down or selling whatever is left of our company in two or three years.

“There is no long-term strategy other than milking and continuing to cut,” said Ken Doctor of Harvard’s Nieman Lab. “Their view is that in 2021, they’ll deal with that then. Whatever remnants are there, they’ll try to find a buyer.”

Alden Global Capital and DFM were recently sued by another hedge fund for diverting company revenues to invest in unrelated Alden investment projects and real estate. A Delaware court filing by a minority shareholder alleges that MNG Enterprises, which does business as Digital First Media, began hiding its financial information from the shareholders in 2017. The suit was first reported on Tuesday by Law360.