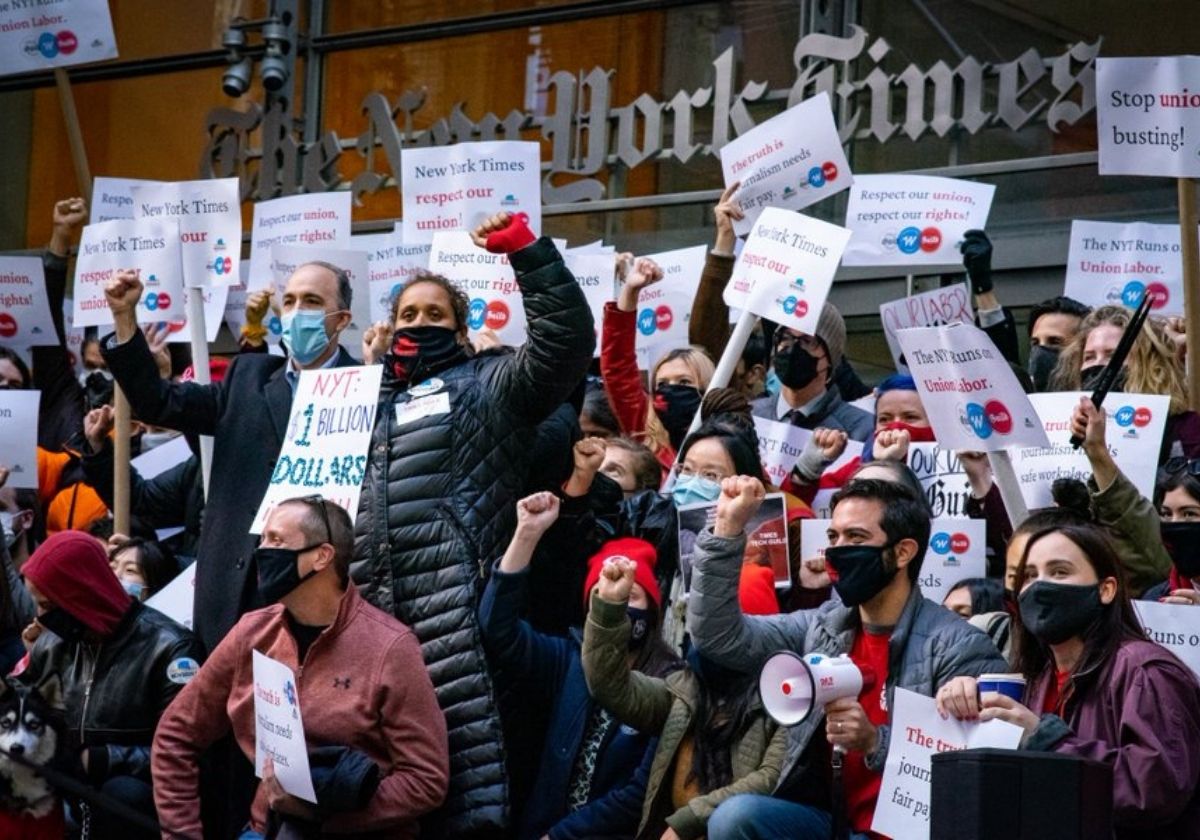 An election to formalize the union of 600 New York Times tech workers began Monday as the National Labor Relations Board mailed ballots to eligible employees. It is a historic milestone in a campaign where workers have fought for recognition since first announcing that they had formed a union last April. Ballots will be counted between February 28 and March 7.

Once certified, the Times Tech Guild will be the largest union for tech workers with bargaining rights in the country. The unit is represented by The NewsGuild of New York Local 31002.

Earlier this month, the NLRB rejected Times management’s attempts to disenfranchise nearly 100 workers from the unit and to split the group into multiple unions, ruling that workers can vote as one united bargaining unit. The unit includes software engineers, data analysts, project managers, product managers, and designers.

“It’s been 26 years to the day since the launch of The New York Times website and The Times tech workers are finally within reach of having our collective voices heard,” said Goran Svorcan, a software engineer at the Times. “Our recent victory at the NLRB underscores that workers banding together, no matter the odds, can begin to make meaningful change in their workplace. This election is the next step.”

Tech workers at the Times first announced the formation of their union in April 2021. Workers are seeking to address greater pay equity, a commitment to diversity and equity in the workplace, more affordable healthcare, just cause protections, remote work protections, professional development and career growth.

Times management has fought their own workers every step of the way, first by refusing workers’ requests for voluntary recognition, followed by engaging in illegal tactics to forbid union members from showing support for their union. Times management then refused to let workers vote for their union through an expedited online election, even though 70% of members in the union signed a letter pledging to vote yes and calling for an expedited vote.

To protest the company’s efforts to hinder a fair election, tech workers at the Times led a half-day walkout last August. Then, in response to an Unfair Labor Practice charge filed by the NewsGuild, the NLRB found in December 2021 that the Times had broken the law by telling certain employees that they couldn’t show public support for the union. The Times refused to settle the charge, and the NLRB will now be prosecuting the Times for violating federal labor law at a hearing to begin in March 2022.

“Despite management’s best efforts to thwart us, this election will show what we’ve known all along: my coworkers and I are ready to take our place at the table. It’s long past time for us to have a say in our working conditions and our futures,” said Shay Culpepper, a software engineer.

The Times’ opposition to the Tech Guild is part of a growing pattern of union-busting by the company. Earlier this month, the Times announced it was creating three new paid holidays for non-union employees only—Juneteenth, Indigenous People’s Day, and Veterans Day— in a cynical attempt to use important days of remembrance as bargaining chips in negotiations with the Times Guild, which represents newsroom, advertising, and other departments.

Times management has also slow-walked contract bargaining at the Wirecutter Union, which reached a contract settlement in December after a five-day strike, as well as at the Times Guild, with an unsuccessful attempt to limit Guild members’ ability to attend and observe their own contract negotiations.

In November, members of three unions at the Times—the Times Tech Guild, the Times Guild, and the Wirecutter Union—held a joint unprecedented protest in front of The New York Times building in midtown Manhattan, calling for management to stop their union-busting tactics and respect their right to form a union.

“As workers begin casting their ballots tomorrow, they do so with the support and solidarity of their Guild-represented colleagues at the Times, as well as from across our entire union.” says Susan DeCarava, president of the NewsGuild of New York. “We look forward to an election that reflects the will of our Times Tech members and is free of interference from Times management.”