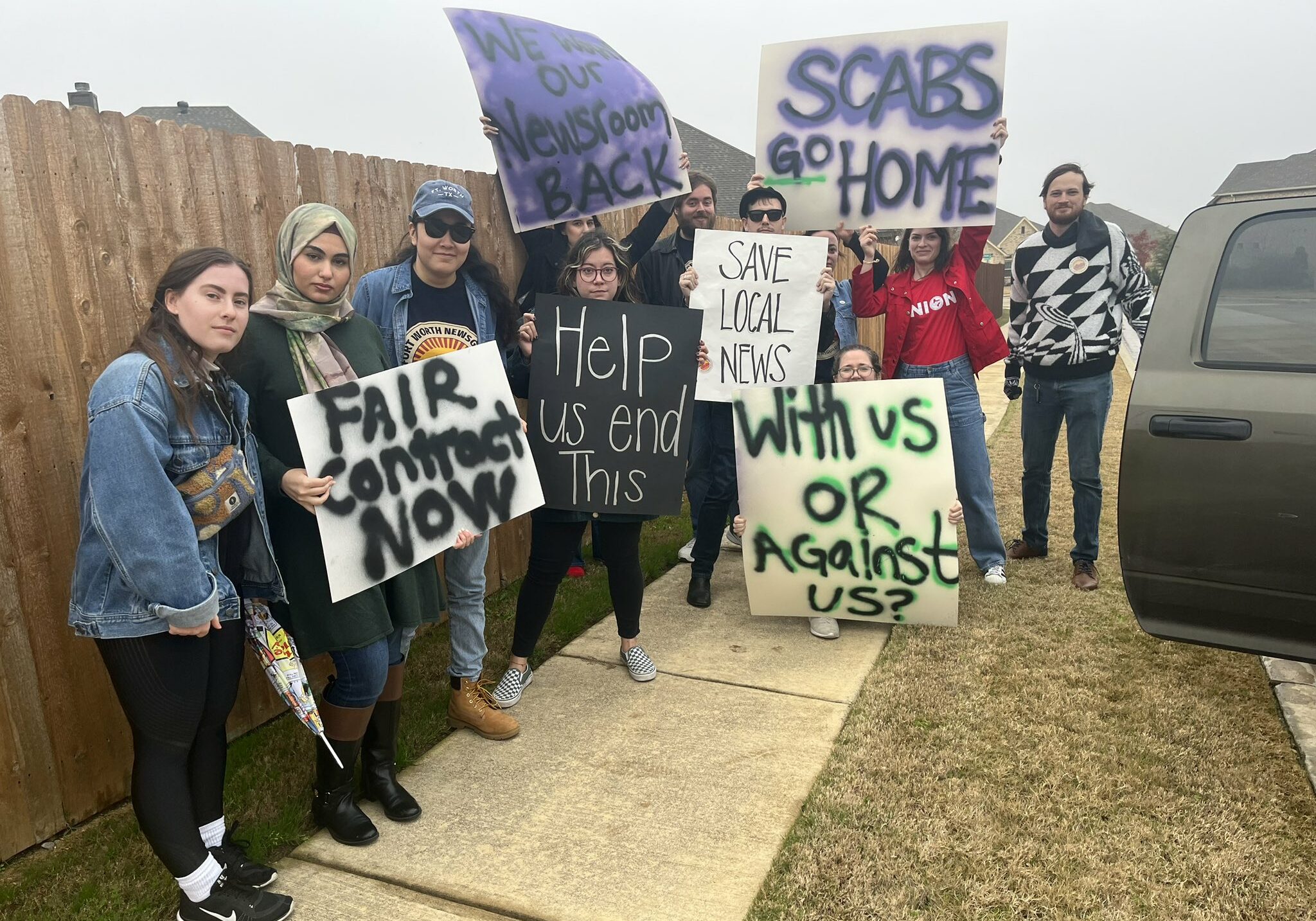 Striking journalists at the Fort Worth Star-Telegram picketing in the neighborhood of editor-in-chief Steve Coffman on December 12, 2022.

All around the country, NewsGuild members are rising up to demand a fair contract.

The New York Times Guild walked off the job on Thursday, in a one-day work stoppage with a super majority of the entire place participating. Not only are reporters, photographers and other newsroom workers part of the Guild, but so are editorial assistants, security guards, IT specialists and many others.

Some of these workers earn as little as $52,000 a year and are expected to live in New York City. That, and an unfair labor practice, are a major reason more than 1,100 workers walked out last week. Claudia Irizarry Aponte spent time talking with the lower paid workers at the New York Times to tell their stories.

Other Guild members, including two of our strikers from Pittsburgh joined the rally, along with supporters from CWA, Teamsters, SEIU and many readers. We were all packed under scaffolding right in front of the building, inflatable rat and all.

Despite record profits, Times management continues to refuse to raise salary minimums for the company’s lowest-paying jobs, or reconsider their discriminatory performance review system. The 24-hour strike was the biggest news of the day, so naturally, the Times itself published a piece without a byline.

“We shouldn’t have to struggle financially to work at a place like the @nytimes,” said Nikole Hannah-Jones.

Washington Post: “Participants included ‘some of the most famous bylines in the world.'”

The Guardian: “We know what we’re worth.”

AP: “If talks stall again we will be asking you for your trust and support for further actions. Whatever it takes!”

Our colleagues at the Times are back at the bargaining table today. And if management continues to play hardball, our members will escalate their fight for their workplace.

Our members in Fort Worth, Texas, at the Star-Telegram, have been on strike for three weeks now, demanding that their owner, McClatchy, return to the table and bargain in good faith (there too we have filed unfair labor practice charges). Local journalism depends on these workers, and all they are asking is for livable wages and better working conditions. McClatchy’s decision to revoke striking workers’ healthcare, during an ongoing pandemic no less, is abominable. Yesterday, the journalists took their picket line and inflatable rat right up to the editor’s neighborhood. The cops were called on these peaceful journalists, who were “VERY LOUD….DISTURBING,” according to the police report.

If you’re able, please consider contributing to their strike fund and stand with our members in Texas.

Fort Worth Report: “We care about this community. McClatchy does not. We will keep fighting until we get a fight contract, with livable working conditions.”

Poynter: “For-profit companies like McClatchy are not going to give employees fair working conditions on their own, unfortunately. So we have to fight for them even though we shouldn’t have to.”

Washington Post: “Journalists with the Fort Worth Star-Telegram newspaper continued their strike, claiming they’ve been pushed to the brink and that parent company McClatchy has refused to bargain in good faith over a new contract.”

In Pittsburgh, workers at the Post-Gazette are still striking following stalled negotiations with the notorious Block family, who continue to refuse to come to the bargaining table, despite multiple unfair labor practices. If you haven’t done it yet, subscribe now to their strike publication, the Pittsburgh Union Progress (aka “PUP” for short!) (@ThePUPnews) We are continuing to escalate our fight and continuing to report local news, and strike news, is part of our fight.

And the best way to support our folks in Pittsburgh is to contribute to their strike fund.

The Journalism Competition and Preservation Act made a surprising appearance in the defense bill last week, and we called on legislators to again improve the bill to make it more transparent and focused on supporting jobs. McClatchy, owned by hedge fund Chatham Asset Management, is begging for the bill to pass so they can get collective bargaining rights to go after Google and Facebook alongside Gannett, Alden, the Block family and many other publishers. They’re begging for this bill to pass without the requirements on job investment while at the same time stripping away healthcare, cutting jobs, closing departments, laying off journalists, keeping wages low, enriching executives and buying back millions in stocks. It’s hypocritical. Our duty is to hold power to account and demand that our companies invest in our work and do it with transparency. It’s really not that hard.

Now, the journalism tax credit (formerly the Local Journalism Sustainability Act) has a better shot at passing in a larger bill. The bipartisan bill would provide a refundable tax credit up to $25,000 for companies employing local journalists. It doesn’t pick winners and losers, only supports retaining and hiring local journalists. The bill is supported across the board in our industry and would provide some much needed immediate relief to the headwinds many local newsrooms face. And it supports jobs. Did I mention that its main purpose is to support local news jobs? We’ve been supporting it for over a year. Drop a line to your senator and let them know it has to be a top priority.

And we joined a group of press rights and civiil liberties organizations calling on Congress to pass the PRESS Act, which would create a federal “shield” law that would protect journalists from surveillance or compelled disclosure of source materials except in emergency situations. It has bipartisan support.

We’re wrapping up the final module of our online steward training this year with the anti-harassment workshop at 9 p.m. ET tomorrow, December 13. Register here. We’ll restart the steward training on January 11, 2023, so mark your calendar if you haven’t done one of these awesome trainings yet! If you complete all six modules, we’ll send you a rare TNG Steward pin!

Finally, just a brief reminder that our union’s nominating conference is in less than a month! It’ll be on Zoom at 12 p.m. ET Saturday, January 7, 2023. Mark your calendar for that! We’ll have more information soon.