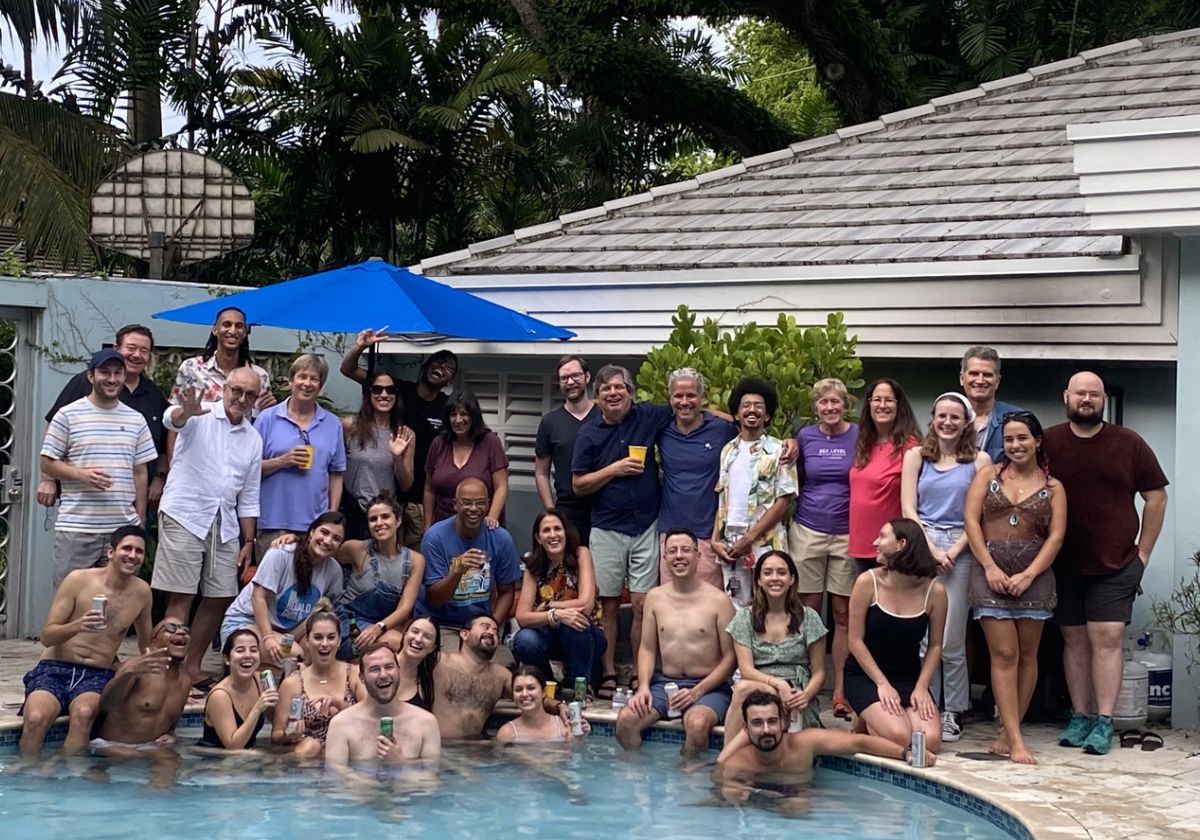 Members of One Herald Guild celebrate their first collective bargaining agreement in and around a backyard swimming pool at the home of Dave Barry and Michelle Kaufman.

This weekend has been very difficult for our members and other residents of Puerto Rico, who have been impacted by flooding, power outages and devastation caused by Hurricane Fiona.

The governor said Monday that the hurricane caused catastrophic destruction in urban areas and left almost the entire island without power.

We represent several hundred workers, mostly in broadcast at Telemundo, Univision and WAPA-TV, across the island in our local UPAGRA 33225. I’ve reached out to our leaders there and initial reports are that our members are OK and haven’t reported suffering any major losses. The local was able to purchase a generator after Guild support following Hurricane Maria in 2017 and the office didn’t flood and has power. We will continue to share information about how you can help our Guild family as they recover. Be sure to follow them on Twitter as a first step.

I just got back to DC yesterday after a two-week long trip across the continent to meet, strategize and celebrate with Guild members all over.

First I was in Canada for the Toronto Labour Day Parade and met with local members at the Canadian Media Guild and Canadian Broadcasting Corporation. Then I was in Hawaii meeting with other unions to build solidarity for Guild fights and met with workers in our newsrooms there. (We represent staff at the Honolulu Star-Advertiser, the Maui News and the Hilo Tribune-Herald).

And then I flew back to the east coast and rallied with members at the NewsGuild of New York and the rest of our parent union, the Communications Workers of America, in the New York City Labor Day Parade. Executive Vice President Marian Needham was also able to join the parade and we rallied alongside workers at the New Yorker, New York Times, Law360 and many, many other workplaces.

On Thursday we celebrated with the 500+ workers who recently won union recognition at Condé Nast. That’s one of the largest groups to unionize with The NewsGuild in the last decade and brings the total number of workers who have joined the Guild in 2022 to a whopping 1,893!

And finally I was just in Miami celebrating with One Herald Guild their win of a first contract covering workers at the Miami Herald, el Nuevo Herald and the Braden Herald.

Here’s a group photo of the One Herald Guild celebrating at Dave Barry and Michelle Kaufman’s home on Saturday.

There were a lot of tears of joy from all the folks who gathered to celebrate this historic win.

“This is a team effort and all I hoped I ever did and that Mary Ellen did and we did together, with Dan with Tony, with the original unit council and every activist and every rank and file person was to just hold up a mirror and say, ‘This is something you’re doing and you can do and we’re going to do it,’” said Joey Flechas, co-chair of One Herald Guild.

“And the reason that we’re here is because you did look into that mirror and said, ‘I can do it.’” he said. “And we did it together.”

The newsrooms negotiated for two-and-a-half years for their first contract and won a deal in August after a one-day work stoppage in April.

We of course celebrated with Miami cuisine and I definitely accidentally ate a cake with beef in it. (I’m a vegetarian, but no complaints from me!)

Nearly 1,300 employees of the New York Times had pledged to work from home, rejecting management’s “expectations” that they would return to the office at least three days per week, beginning last Monday, Sept. 12.

On Tuesday, the Times employees were joined by more than 200 members of the NBC Guild.

“We will continue to produce high-quality, award-winning work, while reminding the company it cannot unilaterally change our working conditions,” the Times workers tweeted.

“Any return-to-office policy, as a matter of workplace health and safety, should be a part of our negotiated contracts, alongside provisions for fair wages, equitable treatment for members and more,” they said.

Staffers are fed up with the slow pace of contract talks. The journalists represented by the NY Times Guild have been working under a contract that expired in March 2021. The tech workers, who won union recognition in March after an aggressive anti-union campaign by management, are currently negotiating a first contract. Wirecutter workers reached agreement on their first contract in December, following a five-day strike during Wirecutter’s peak Thanksgiving period.

In June, more than 900 Times journalists signed a letter telling management to step up bargaining. Two weeks ago, more than 300 employees sent personal emails describing their financial struggles. They haven’t had a raise in more than two years.

“The @nytimes is giving employees branded lunch boxes this week as a return-to-office perk,” union members tweeted on Monday. “Instead of free trinkets or dictates about where we have to work, we want respect and a fair contract, without delay.”

At NBC, execs offered workers the chance to win a Nespresso machine if they returned to the office. “But they’re not offering a reasonable deal at the bargaining table, and they showed up to the last two sessions empty handed — so we’re staying out,” they tweeted.

Any mandated return must be bargained with our union, they said, blasting NBC for negotiating at a glacial pace.

“We’re proud to have won a seat at the table, and we’re ready to get to a deal that includes a safe and flexible return. But a deal requires good faith participation on both sides, and we aren’t seeing it. If @NBCNews wants us all back, they gotta show up first,” they said.

Kathy Zhang won the swag contest after we asked Guild members to post their best union look on Twitter and tell us why they’re proud to be a member. We pulled the tweets and used a random number generator to select the winner.

Kathy was instrumental in organizing the New York Times Tech Guild, the biggest union of tech workers with bargaining rights in the U.S. When notified of the win, she tweeted, “get ready folks, I’m about to become even more insufferable, sporting what is essentially a members-only jacket.”

You can shop for union swag here and see more of the entries here. Thanks to all who participated!

Verso Books’ U.S. staffers ratified their first contract on Wednesday, 16 months after they started contract talks with management of the publishing house. The decision was unanimous, with all 14 members voting in favor.

That’s a complete reversal from August, when they rejected management’s proposed contract by a vote of 14-1.

“We had been negotiating for some time by then,” said Ben Mabie, an assistant editor in the acquisitions department and Verso Guild’s chief negotiator. “Management was under pressure to settle our contract because they were about to start negotiating with our London colleagues in the National Union of Journalists,” he said.

Workers decided they would have to accept management’s lousy August offer or prepare to escalate to other tactics. And the resounding “no” vote made management realize the workers were serious. Most of the contractual improvements were negotiated in the last 30 days, Mabie said.

Workers are pumped by their recent accomplishments. “Everyone involved understands that this is more than just the culmination of the last year of fighting,” Mabie added. “We’re working to create a better, more egalitarian workplace where all can flourish.”

Highlights of the agreement include an 11% raise in the first year, a 2% employer contribution to employees’ 401(k) in addition to a 5% match, improvements to diversity the workplace through hiring, requirements that permalancers are offered jobs after a period of time and a parental leave policy with 16 weeks of full pay and 10 with half pay. “We’re proud of what we accomplished as a union, which would have been unthinkable without the support of our authors and readers,” union members tweeted in a Thursday announcement of the vote.

Congrats to workers at Verso! They have good reason to be proud because of some amazing wins in their contract.

AP staffers will receive a 4% raise starting Dec. 1 and a freeze on health care premiums through the end of 2023.

“This significant win is the result of News Media Guild negotiations after The Associated Press came to the Guild wanting to offer a limited ‘special pension option’ to eligible staffers who are at least 60 years old,” the local tweeted.

The Guild negotiated that the pension offer would only be made if staffers received higher wages and a prohibition on health care cost spikes over the next year. Guild members voted overwhelmingly in support.

The agreement doesn’t end bargaining for an overall successor to their current contract, which is ongoing.

Staffers at the Labor Network for Sustainability won a commitment from the leadership of the nonprofit organization that they would grant voluntary recognition of their union if workers can show majority support.

Union authorization cards will be counted by the American Arbitration Association on Oct. 3, and workers are confident they’ll prevail. They’ll be joining the Washington-Baltimore News Guild Local 32035.

Members of the UFCW Guild are fighting to extend the probationary period of a coworker who was fired while seeking urgent medical treatment. In addition to losing his job, his benefits will expire on Sept. 30, while he’s actively undergoing treatment.

You can help by signing this petition to the leadership of the United Food and Commercial Workers Union.

The Canadian Media Guild is calling on the Canadian Broadcasting Corporation to conduct a full investigation into the use of the “n” word at CBC/Radio-Canada.

“We are writing on behalf of Black Canadian Media Guild (CMG) members working at CBC/RadioCanada concerning the use of the ‘n word’ and how the Corporation handled a complaint about use of the term on a SRC radio program,” the CMB Guild Executive wrote in a Sept. 1 letter.

The issue came to light after a Black listener filed a complaint about hearing the word 4 times in a 6-minute segment on Aug. 17, 2020.

The CBC’s Ombudsperson “failed to respond with the care and consideration any member of the public, regardless of race, would expect,” the Guild executive board wrote. “Only when the affronted listener elevated his complaint to the CRTC [Canadian Radio-television and Telecommunications Commission] did CBC/Radio-Canada deliver any meaningful response – and that, only after the Commission ordered the Corporation (Broadcasting Decision CRTC 2022-175) to deal with the complaint in a more forthright way.” CBC is appealing the commission’s ruling.

“CBC/Radio-Canada’s public support for any use of the ‘n word’ continues to be triggering for many Black employees,” the union’s board members said.

Want to join the New York Times Member Organizer Program? We’re looking for NewsGuild activists to coach worker-leaders of the NY Times Guild, NYT Tech Guild, and Wirecutter Union. Participants will be coaching them on conducting one-on-one conversations and working with them to build to supermajority collective actions.

We’ve got many great training sessions for Guild activists scheduled through the fall. Upcoming events are listed on our calendar, with new events added frequently. A new round of steward training sessions is set to start Sept. 28, with starting times our west coasters will appreciate.