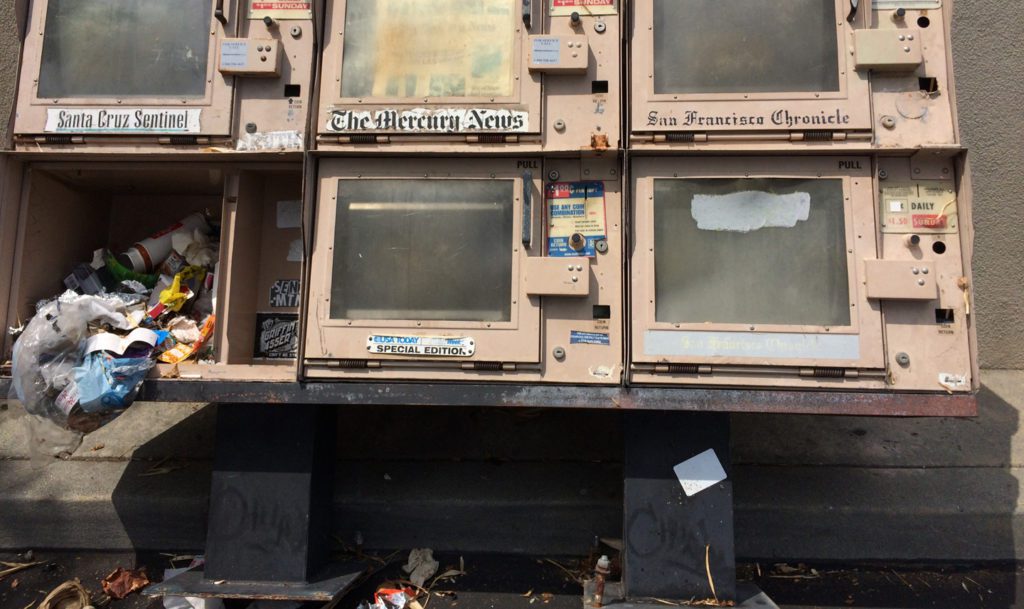 The newspaper industry’s top analyst, Ken Doctor of Harvard’s Nieman Lab, revealed Tuesday that Alden Global Capital newspapers had profit margins as high as 30 percent in fiscal 2017, with an average of 17 percent across all of Alden’s Digital First Media papers — stunning numbers in an industry where margins of less than 10 percent are the norm.

In an article titled, “Alden Global Capital is making so much money wrecking local journalism it might not want to stop anytime soon,” Doctor said DFM’s financials for the fiscal year ending June 30, 2017, were leaked to him by a company insider.

The report came days after Alden and DFM began cracking down on reporters and fired a Colorado editor for writing about Alden’s roughshod business practices that include newsroom staff cuts of more than two thirds since the hedge fund took over the chain in late 2011. In early April, the editorial board of the Denver Post ran a six-page Sunday section decrying Alden’s decimation of the Post, kicking off national news coverage of what’s been dubbed “The Denver Rebellion.”

“This is kind of an outlaw company that just horrifies anyone who sees what they’re doing.”

The day before Doctor’s profit story ran, workers at an Alden paper in the Philadelphia suburbs were sent home because of ongoing problems with mildew in their building. And at the Alden-controlled Trentonian, workers have contended with large rats and no hot water.

“This is a company that can’t even keep employees safe from mildew and rats while making huge profits — it’s just beyond the pale,” Doctor told DFMworkers.org. “This is kind of an outlaw company that just horrifies anyone who sees what they’re doing.”

Doctor said he’s gotten no blowback from Alden or DFM regarding his publication of the leaked numbers. The exposure of DFM’s financial details is unprecedented, as Alden is a highly secretive, privately held firm that has never disclosed its revenue or profit numbers.

Doctor said he did hear on Tuesday from some DFM insiders who gave him additional confirmation that his calculations of profit are spot on.

He adds that the margins at other newspaper chains, even those also notorious for aggressive cost-cutting, are much, much lower.

“They’re as low as 3 percent for McClatchy,” he said. “The New York Times is around 8 to 12 percent. Tronc was six, according to Yahoo Finance, and Gannett’s own report was that it was about 8 percent.

“So 6 or 8 percent compared to Alden’s 17 percent is a huge difference.”

The new details explain why DFM’s former CEO Steve Rossi boasted to workers last year that the company was “solidly” profitable, a claim that befuddled and angered employees who faced round after round of layoffs.

Extrapolating back to 2015, when Alden began to escalate its aggressive cost cutting, it seems possible its executives could end up raking in close to a billion dollars ($960 million, if the $160 million per year is consistent) through fiscal 2020.

That’s when, according to Doctor, Alden plans to dump or sell whatever’s left of its diminished newspapers.

It’s worth noting that employees have received only one raise — a three percent increase — since Alden took the helm.

As he wrote in his Nieman Lab report, “Alden has transformed Digital First Media into a non-stop cash register.”

The response from readers and journalists to this news ranged from the disheartened to the outraged.

“It’s frustrating to know…that subscribers (like me) may as well send payments directly to Alden since our subscription $ isn’t being reinvested in the paper,” wrote subscriber Ken Goering on Twitter. “But cancelling my subscription (I won’t) makes matters worse.”

“Congratulation to May 1st, 2018, where my anger levels probably reached their peak before 9 a.m.,” wrote Matt Pearce of the Los Angeles Times, as he re-tweeted Doctor’s story.

“This is a company that can’t even keep employees safe from mildew and rats while making huge profits — it’s just beyond the pale.”

‘Held Together with Baling Wire’

After the Denver Rebellion, there’s been interest across the country from potential local buyers who’d like to acquire and try to save papers such as the Post.

DFMworkers.org asked Doctor if he thinks the negative national publicity about Alden might pressure the hedge fund’s two principals, Randall Smith and Heath Freeman, to sell the papers to local owners.

Doctor said it’s possible, but he believes a hit to the firm’s bottom line would be the main incentive. That option may be brewing in Denver, where, Doctor said, two large advertisers are considering pulling ads to protest Alden’s gutting of the newsroom.

“The only thing that changes the trajectory of this company is if something gets in the way of cash flow in the near term,” Doctor said.

A possible buyer might be Apollo Global Management, another private equity firm that almost bought the chain several years ago. The deal fell through at the last minute, Doctor said, because “Apollo looked at DFM’s technology and saw that it was held together with baling wire. They said, ‘We’re going to need $35-40 million to upgrade.’ And that’s what killed the deal.”

For the papers to survive, he said, they need “accelerated digital development and transformation, with the understanding that the digital product needs to be state of the art. You need really good journalists and you need a critical mass of people (who excel) in social media and visual and audio storytelling.”

Doctor believes Apollo could pull it off. “There’s no doubt they would execute it better than Alden.” The problem, he said, is “Heath Freeman does not believe the price should be lower.”

Alden executives have calculated the next two to three years’ worth of profits to be milked from DFM “down to the penny,” Doctor said. To be considered, any offer would need to exceed that number.

Still, the near-constant negative publicity of late might have an effect on the once-private Freeman, who shuns publicity and does not respond to inquiries from the press.

“He is a human being,” Doctor said. “When he goes to the cocktail parties, it is far more likely in the spring of 2018 that the people he talks to will know what it is he does.”

This article originally appeared on the DFM Workers website, News Matters, which is a project of The NewsGuild-CWA.