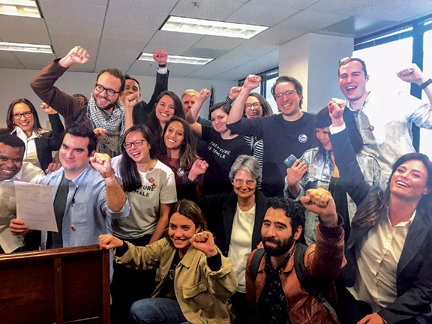 Feb. 23, 2018 – Newsroom employees at the Los Angeles Times voted 248-44 to join The NewsGuild-CWA in January, ending 136 years of unfettered rule by management. Those voting in favor of the union captured 85 percent of the vote.

“Today we made history,” they wrote in a letter to their co-workers immediately after the vote totals were announced. “For the first time since the Los Angeles Times printed its inaugural edition in 1881, our journalists have voted to form a union.

The union drive was initiated by newsroom employees, who spent months talking with their colleagues to build support for the union. By the time on-site voting took place on Jan. 4, the newsroom was awash with pro-union signs and the group’s Twitter feed was filled with workers explaining why they planned to vote “yes.” (See below.)

Kristina Bui, a copy editor and Organizing Committee member, said the massive win sent a clear signal to Tronc, the owner of the Times, which sold the paper to Los Angeles-based billionaire physician Patrick Soon-Shiong less than three weeks after the vote.

“For years, we tolerated disruption, cuts and mismanagement, and produced important, meaningful, award-winning journalism,” she said. “The newsroom has had enough of unilateral decisions from the top. We’re ready for a seat at the table.”

The workers’ victory is part of a national trend, said NewsGuild President Bernie Lunzer. “The media landscape is changing, with the demands of private profiteers pushing against the hallowed traditions of quality journalism.

“The journalists of the L.A. Times are taking control of their own future,” he said.

The key to victory was the Organizing Committee, which was comprised of committed union supporters who tapped into sentiment in the newsroom to build strength.

“We had to put in a lot of one-on-one conversations with our colleagues over many months in order to turn years of anger and frustration into action,” said Bui.

The group’s Twitter feed was also essential to the organizing efforts. Tweeting was an efficient way to reach the newsroom and readers, Bui said. Filled with comments from rank-and-file supporters of the campaign, the group’s Twitter account made followers realize “we’re people and not just this anonymous brand,” she said.

The committee demonstrated the value of having a union by functioning like one before the votes were even counted.

They objected to plans to move the paper’s offices and called for the firing of then-publisher and CEO Ross Levinsohn when National Public Radio reported credible allegations that he had engaged in sexual misconduct and “frat house” behavior in work settings over two decades.

Within days of the vote count, the Guild sent a letter to Tronc’s board of directors calling on management to abandon a business plan organizers said “would cheapen our journalism, damage our brand, betray our readers and ultimately shortchange our shareholders.”

The Guild is moving quickly to tap into the enthusiasm of the campaign.

“We encourage everyone to get involved, even if you were not a part of the union election campaign,” the Organizing Committee’s Jan. 19 letter said. “The union we’ve created belongs to everyone. There is no better time to get involved.”

Since then, members elected local officers and began preparing for negotiations with management for a first-ever collective bargaining agreement. Workers are seeking improved pay, better benefits, pay equity for women and people of color, greater diversity and better working conditions.

Photo, top: Organizers celebrate as the results are announced.

Why They Voted Yes

L.A. Times employees offered reflections on the need for a union on LATGuild’s Twitter feed.
Below are some excerpts.

“After 136 years of giving a voice to others, it’s time Los Angeles Times journalists had a voice of their own,” wrote Pulitzer Prize winning reporter Bettina Boxall.

“My dream was to work here since middle school. I wanted my communities — Latinos, youths and LGBTQ — reflected in our coverage. That’s why I’m voting today @latguild. Let’s continue to open doors for others,” tweeted digital editor Brian De Los Santos.

Business reporter Geoffrey Mohan tweeted, “After three decades in journalism, I won’t stand by while outside, nouveau investors try to turn local journalism into a sweatshop. I support @latguild.”

“When I moved to LA I was shocked at the low morale and high turnover. I was also shocked at how dependent we are on interns, trainees, and contractors who are underpaid, underappreciated and overworked. The ONLY people who are addressing this is @latguild,” wrote designer Bakr Saliq.

“Our newspaper has no problem pointing out inequalities outside our building,” said reporter Jaweed Kaleem. “It’s time to seriously address them inside — locking in pay, benefits and editorial independence.”

Columnist Steve Lopez said, “Maybe unions can’t save the news biz. But they can raise the voices of those who can — journalists. Having written for decades about economic justice, I’m with Los Angeles Times Guild colleagues committed to a mission I share at a newspaper I love.”