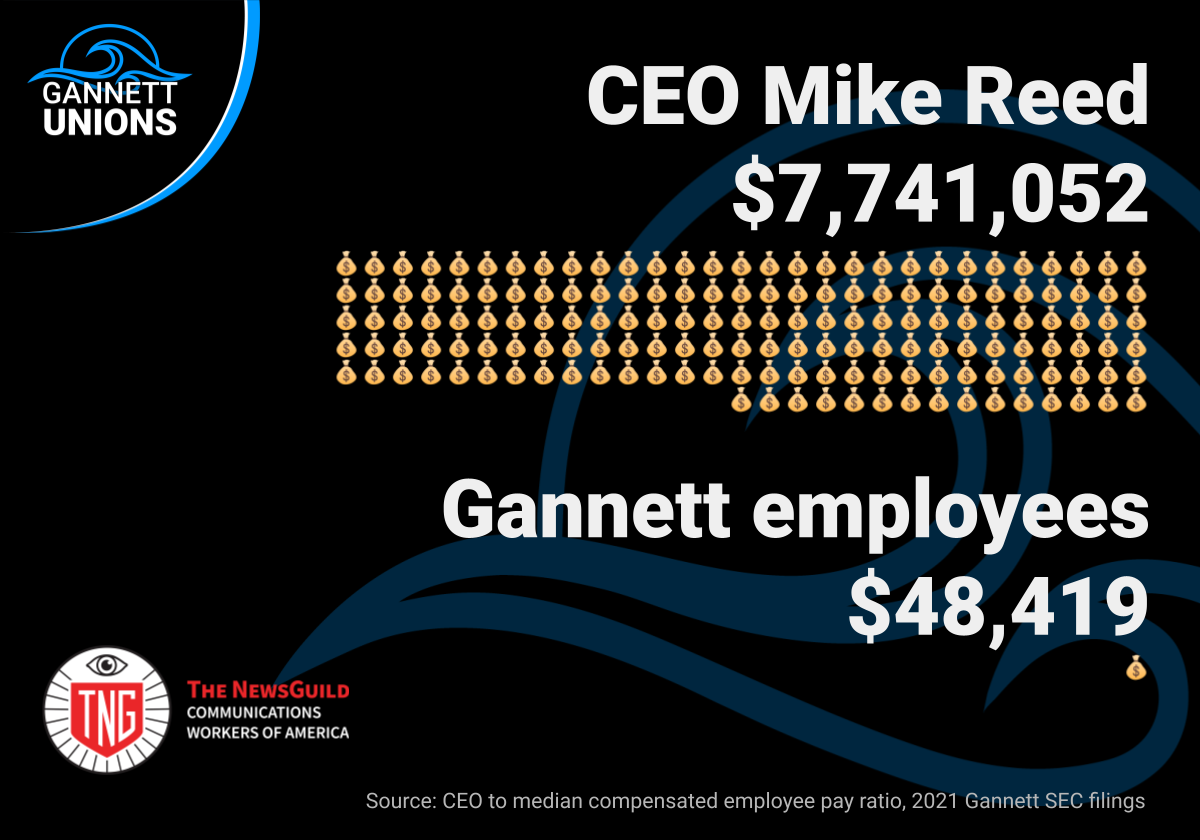 This afternoon Gannett announced plans to cut employee benefits, push buyouts and require non-union employees to take unpaid leave. This announcement came only two months after the company laid off 400 employees and cut another 400 open positions. Gannett’s executives continued to make their motives clear, despite their mission “to build trusted local communities where people thrive.”

Gannett only cares about cutting costs by bleeding newsrooms dry. Gannett doesn’t care about journalists, the local news our communities depend on nor the survival of one of the most important pillars of our democracy.

The only way to fight back is to build a strong union in every newsroom in North America. Many of these cuts will not immediately impact newly unionized newsrooms and Gannett has a legal obligation to bargain over any changes with its workers.

Hundreds of Gannett journalists are organizing across the country to force Gannett to put people over profits. Journalists hold companies — Gannett included — to account every single day.

America’s journalists call on Gannett to cease the cutting, invest in our newsrooms and pay journalists enough to thrive in the communities they cover. Gannett should eliminate its extravagant executive pay, fire its anti-journalist lawyers and immediately suspend its stock buyback program.

Gannett cannot cut its way out of financial mismanagement. It must invest in journalists if it has any chance to grow. Every American, every community and our democracy depend on it.

This the clearest endorsement yet of the importance of unions. Mike Reed acknowledged these changes won't impact newsrooms at @Gannett like mine who are still bargaining.
(We're approaching the 3rd anniv. of when we voted to establish the @azrepublicguild, but still no contract.) https://t.co/KlYz6dVlyt

Y'all I am so grateful for the @AustinNewsGuild. Gannett just announced they are cutting 401k matches and forcing furloughs over the holidays and my union colleagues are protected by status quo. My heart hurts for all the journalists and families who will suffer because of this.

The NewsGuild is the largest union of journalists and media workers in North America, representing about 27,000 workers in media, the public sector, at nonprofits and other labor unions. The Guild represents hundreds of media workers across Gannett at about 50 publications. The Guild is one of the fastest growing unions on the continent and is a sector of the Communications Workers of America (CWA), which represents workers in telecommunications and information technology, the airline industry, health care, public service and education, manufacturing and other fields.