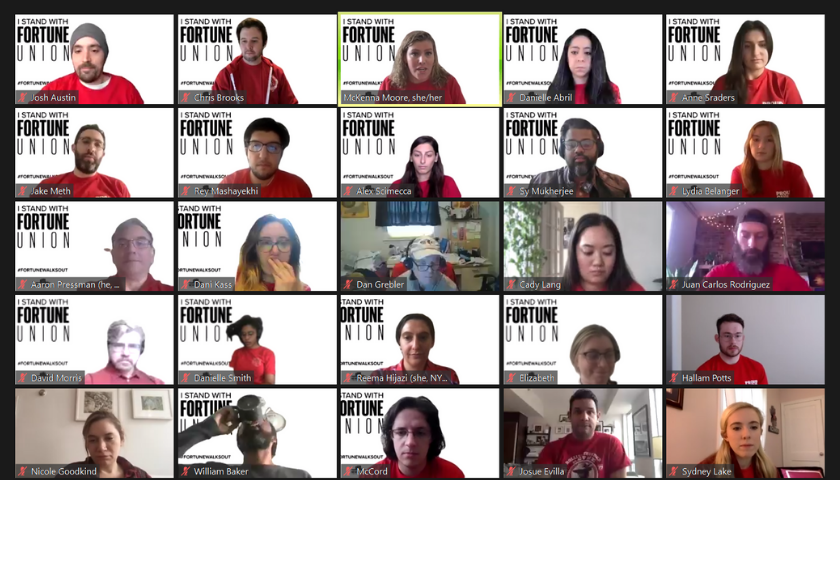 Employees the Fortune Union staged a 24-hour walkout on March 16 to protest management’s “bad faith” in contract negotiations and to demand a fair, equitable collective bargaining agreement. They also filed Labor Board charges against the company.

“Fortune management has been subverting the bargaining process, trying to work around the union, and acting illegally for that entire stretch,” workers said in a statement. They have been negotiating for nearly a year-and-a-half for a first contract for digital employees, with little movement toward an agreement. Management has failed to respond to nearly 20 union proposals on issues such as diversity, severance provisions, and health and safety, Guild members said.

“We came in thinking negotiations was going to be a back-and-forth, and that’s not what we’ve found, said McKenna Moore, an audience editor and reporter and Fortune Union’s 1st vice chair. “We’re frankly done asking nicely… So today we’re walking out and withholding our labor for 24 hours,” she said.

Among the most contentious issues are:

Equity and diversity.  Union negotiators gave management a diversity proposal during their first bargaining session in November 2019, but management has refused to negotiate over the issue.

Salary transparency and pay equity. Management asked union members to keep their salaries and any raises they receive secret, workers said. “This is illegal and it enshrines inequity in the newsroom,” they said. “Salary transparency is key to achieving an equitable workplace.” A pay equity analysis conducted by Fortune Union shows that, on average, women in the bargaining unit make 84% of what men earn and Guild members of color make 78% of what their white colleagues earn.

Performance evaluation. Management implemented a performance evaluation system based on production quotas and traffic metrics unilaterally, in violation of labor law. “Quotas are antithetical to our values and instead create a click-based newsroom culture,” that impacts the quality of their work, workers said.

“I’m joining my colleagues in a work stoppage to make it clear that Fortune Magazine management must bargain with us in good faith and address the numerous concerns of their own employees,” said Sy Mukherjee, who covers healthcare and biopharma for the magazine.

The NLRB charges center on management’s unilateral actions, including telling not to discuss raises; unilaterally implementing quotas and unilaterally issuing a handbook.