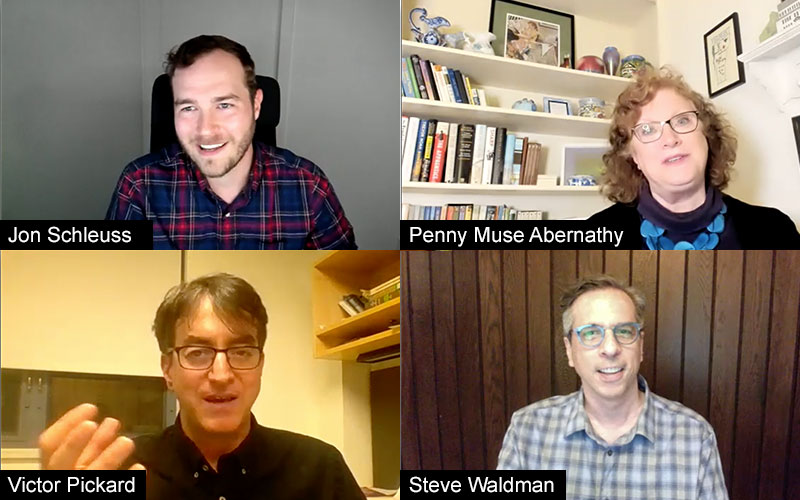 Editor’s note: An earlier version of this article was posted on SaveTheNews.org on Oct. 1, 2020.

Oct. 2, 2020 – A panel of news industry “big thinkers” offered an array of hopeful solutions to the crisis facing local journalism and issued a stirring call to action at a NewsGuild Town Hall on Sept. 30.

The threat is clear:  One quarter of the nation’s newspapers were eliminated in the 15 years before the pandemic. Over the previous decade, the number of newspaper journalists declined by half, mostly at state and regional news outlets. The ad revenue that sustained the news organizations migrated to Facebook and Google and hedge fund ownership now dominate the industry. COVID-19 raised the crisis into an extinction-level threat: We’ve lost more than three dozen newspapers and dozens more have moved to online-only.

Excerpts from the event are Town Hall are below.

Embrace Journalism as a Public Service
“Embrace the idea that being a local journalist is a public service profession. None of us went into it for the money. Increasingly, we have to re-embrace that, state it with pride, and really view ourselves as a service to the community.” ~Steven Waldman

“One of the encouraging things is that trust in local media is still much higher than in national media. As a journalist, you tend to put a ‘wall’ between you and your community. But we have a role to build those communities and inform our democracy.” ~Penelope Muse Abernathy

“There is value to journalism that goes beyond profitability. We don’t only have bookstores. We also have public libraries. We have to get to that place in journalism.” ~Steven Waldman

Democratize Our Newsrooms
“We have to make sure owners aren’t public in name only, but truly owned by the people who live in those communities. We need to democratize our newsrooms, and ensure that they look like the communities they serve.” ~Victor Pickard

“Do we have to rely on billionaires to fund journalism? There’s something not quite right about that, but I think about philanthropy in a bigger sense. The community must support journalism. In addition, there has to be a government role.” ~Steven Waldman

Hopeful Solutions
“There’s carrots and sticks: we can offer incentives to have owners donate outlets to nonprofits. The stick is that government antitrust policy can take up ‘localism’ as a public policy value when considering mergers—may not hurt competition, but they hurt the community.” ~Steven Waldman

“If you look at a community that has lost a newspaper, they’re often very poor. That has real implications. How do we begin to address getting money to support that public good?” ~Penelope Muse Abernathy

“One of my first calls for our Save the News effort was to Sen. John Boozman, a now-co-sponsor of the Local News and Emergency Information Act. Republicans, too, realize that the New York Times can’t parachute in to cover local issues in those more rural states.” ~Jon Schleuss

“There has been a newfound appreciation for the 4th Estate. I think there’s a growing concern about [its loss]. Right now there’s a consensus, across the party spectrum, about saving their local institutions. Now is a rare opening to dream bold ideas.” ~Victor Pickard