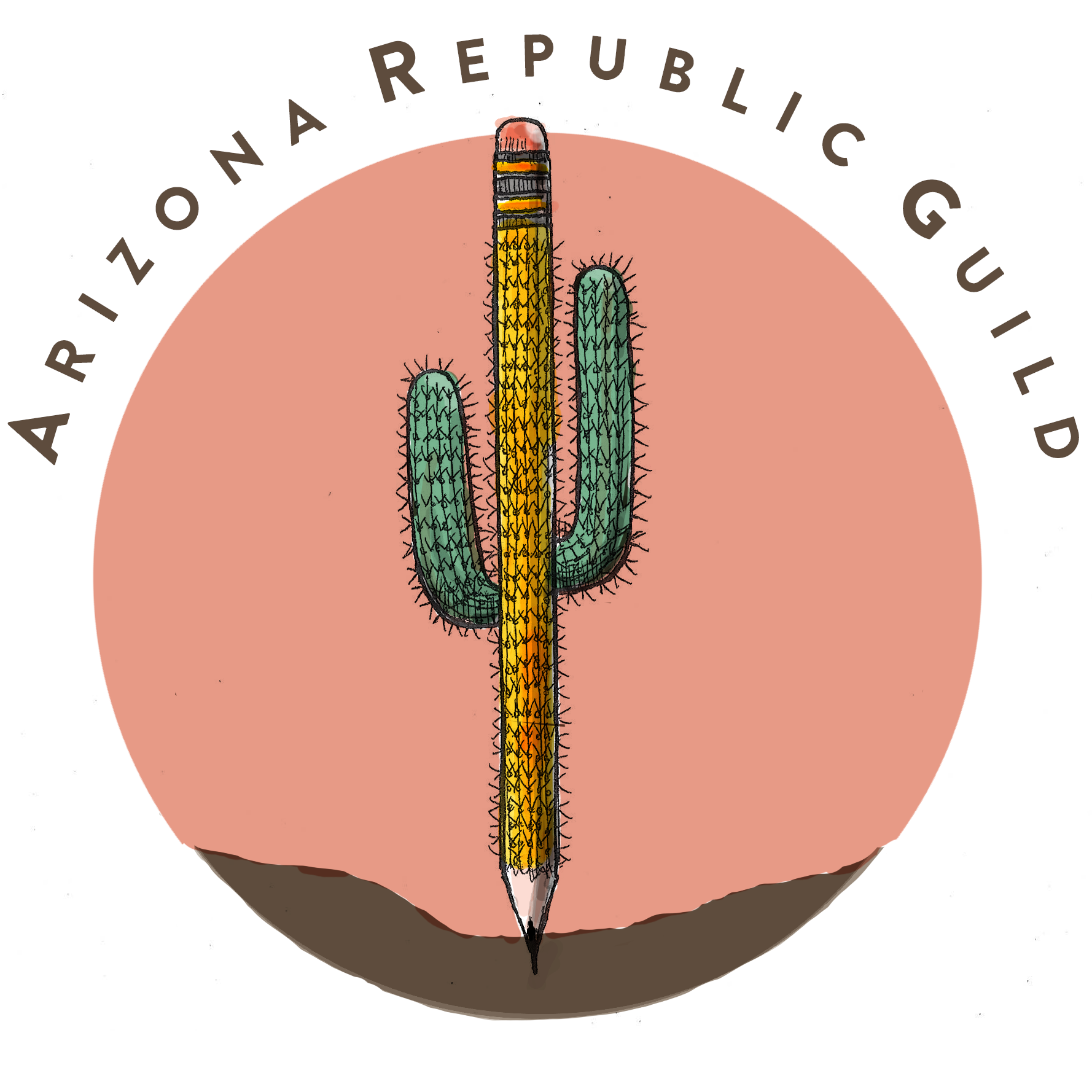 PHOENIX — The Pulitzer Prize-winning newsroom of The Arizona Republic officially announced Wednesday its journalists are taking steps to unionize the state’s paper of record to have a seat at the table as a major corporate merger looms.

Reporters, photographers, producers, columnists, copy editors and other employees have signed union authorization cards stating their desire to be voluntarily recognized or hold an election to join The NewsGuild-CWA.

On the eve of the announcement, management unleashed a campaign of intimidation and harassment, calling known union supporters into the Human Resources office individually and questioning them about their activities.

The HR director seized the work phone of Rebekah Sanders, effectively preventing her from performing her job.

“This is why colleagues and I are organizing at the Arizona Republic,” Sanders said. At unionized publications, employees have substantial protection from these tactics.

The interrogations followed the release of a newsroom-wide email from the executive editor on Friday comparing union supporters to mob bosses and child molesters.

The move comes amid talks that Gannett, The Republic’s corporate owner, will merge with GateHouse Media in a $1.4 billion deal, creating one of the largest news conglomerates in the U.S. The companies say they plan to make $300 million in cuts, including more than $100 million to newspaper operations.

Already, Gannett has slashed the Republic by about 70%, from roughly 425 journalists in 2008 to about 130 today. Across the newsroom, beats that once were covered by teams of people are now manned by a single reporter in a metro area with a population larger than San Francisco, Detroit, Seattle or Minneapolis.

“A shifting media business has chipped away at our newsroom’s strength. The company’s merger with GateHouse Media likely means deeper cuts,” the Republic Guild mission statement reads. “Annual layoffs, stagnant salaries, swelling healthcare costs and high turnover weaken local journalism. Our newsroom needs a large, diverse staff to tell the stories of our community. Our newsroom needs a seat at the table.”

Richard Ruelas, a features reporter and 25-year veteran of the paper, said a union would give the newsroom a voice, particularly amid the impending merger.

The country’s leading news organizations — including the Wall Street Journal, the New York Times and the Associated Press — have been unionized for years. A dozen Gannett newspapers are unionized, including the Indianapolis Star, the Milwaukee Journal-Sentinel and the Detroit Free Press.

Republic staffers are requesting voluntary recognition from Gannett as a show of good faith.

If Gannett does not voluntarily recognize the Arizona Republic Guild, the union authorization cards, which are confidential from the company, will be filed at the regional office of the National Labor Relations Board to trigger an NLRB-monitored election among Republic non-management staff members.

If a majority cast ballots in favor, the newsroom will unionize and begin working with Gannett to negotiate a first labor contract.

Rebekah L. Sanders, a consumer protection reporter, said she grew up reading the newspaper and still remembers her excitement when she joined the staff nearly 12 years ago.

“As a consumer protection reporter, I fight on behalf of readers when businesses treat them badly. Now, I am fighting on behalf of my coworkers,” she said. “I believe our hardworking newsroom deserves fair wages, affordable healthcare, decent layoff severance and a voice in the decisions being made about our future. I believe the future of local journalism depends on all of us standing up to protect our newspapers.”

“I know Arizona Republic editors have the same goal as employees: To produce strong local journalism,” Sanders continued. “But the pressures from corporate executives and Wall Street continue to lead to cuts, cuts and more cuts.”

EJ Montini, a columnist who has worked at the Republic for 29 years, said he supports the unionizing effort.

“I’ve been at the Arizona Republic for a very long time and it’s reasonable for someone to ask, ‘Why now? Why unionize after all these years?’” he said. “The union/non-union question is not about control, but about cooperation. It’s an expressed desire by journalists who live here, work here and genuinely love it here, as I do, to help the company ensure local journalism in Phoenix continues to thrive. Who better to know?”

“Still, I understand if some of those on the staff disagree,” Montini added. “It boils down to this. If you’re interested in having a say about some aspects of your personal and professional life over which you currently have no say — things like salary, benefits, insurance and more — a union provides that. It doesn’t come with a guarantee, of course. But it affords a voice.”

The organization’s mission statement identifies a broad swath of newsroom staffers involved in the effort.

“We are long-serving veterans and rookies in our first jobs. We come from Arizona and around the country and call this state our home. We want The Arizona Republic to stand strong for 129 more years.”

The following journalists at The Arizona Republic are available for interviews:

The NewsGuild-CWA represents more than 20,000 journalists and other communications professionals in the United States, Canada and Puerto Rico at publications and digital sites that include The New York Times, BuzzFeed News, The Guardian, The Washington Post, Chicago Sun-Times, Wirecutter, Denver Post and Consumer Reports. The Guild merged with the 700,000-member Communications Workers of America in 1995.

Below is The Arizona Republic Guild’s organizing campaign mission statement. The guild logo, display above, was designed by Pulitzer Prize-winning cartoonist Steve Benson, who was laid off from the paper in January.

We are uniting not only to protect ourselves but to preserve The Arizona Republic far into the future. A strong local newspaper is vital to our community.
Estamos formando una unión no sólo para protegernos a nosotros mismos sino para preservar el futuro de The Arizona Republic. Un fuerte periódico local es vital para nuestra comunidad.

For 129 years, our Pulitzer Prize-winning newspaper has shined a light on injustice, celebrated the beauty of Arizona and connected people across our sprawling state. We’ve covered deadly wildfires and mass shootings, investigated fraud and held powerful people accountable. Our journalists have risked their lives in search of the truth — reporters Don Bolles and Charles Thornton were even murdered.

And as we unite, we have support from around the country.
Y mientras nos organizamos, contamos con apoyo a lo largo de todo el  país.

And we will win.
Y ganaremos.