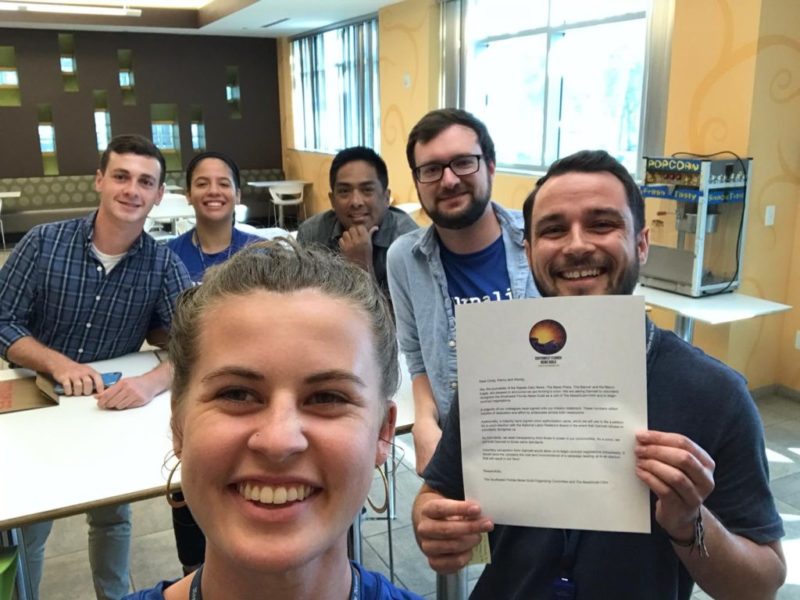 Feb. 24, 2020 – The journalists of The Naples Daily News, The News-Press, The Banner and the Marco Eagle announced Monday they are forming a union and asked management to voluntarily recognize the Southwest Florida News Guild as a unit of The NewsGuild-CWA.

They are the latest group in a wave of media employees who are seeking a voice at work. Last week workers at the Palm Beach Post and the Palm Beach Daily News announced they are seeking union recognition. The new units would five other Florida publications that have unionized since 2016, showing that you can, indeed, organize the south!

A delegation of the union’s organizing committee presented local management with a letter requesting voluntary recognition from the newspapers’ parent company, Gannett, which would pave the way for contract negotiations.

More than 75 percent of non-management employees have signed union authorization cards, organizers said. The group filed the cards with the National Labor Relations Board requesting an election within a 30-day time period.

The Southwest Florida News Guild would cover more than 50 reporters, photographers, planners, producers, news assistants and columnists across the two newsrooms that produce the publications.

In their mission statement, also released Monday, the Guild wrote “Make no mistake: Business challenges over which we have no control will continue. However, we need and deserve conditions that allow us to dedicate ourselves fully to quality work and effective journalism.”

The mission statement, written by the group’s Organizing Committee, details financial woes and impacts on working conditions resulting from a corporate merger between Gannett and GateHouse Media.

“This has taken a toll on our working conditions,” they wrote. “We have lost skilled journalists, and in many cases their positions have not been filled. That makes it difficult for us to maintain the level and quality of coverage our communities deserve.”

The Daily News and News-Press, which through regionalization came to integrate more, join the ranks of several newsrooms nationwide striving for better working conditions as layoffs and consolidation threaten local journalism.

“Both newspapers’ employees find hope in their future,” they wrote. “They hope you do too”

Photos: Staffers were all smiles after announcing plans to form a union.