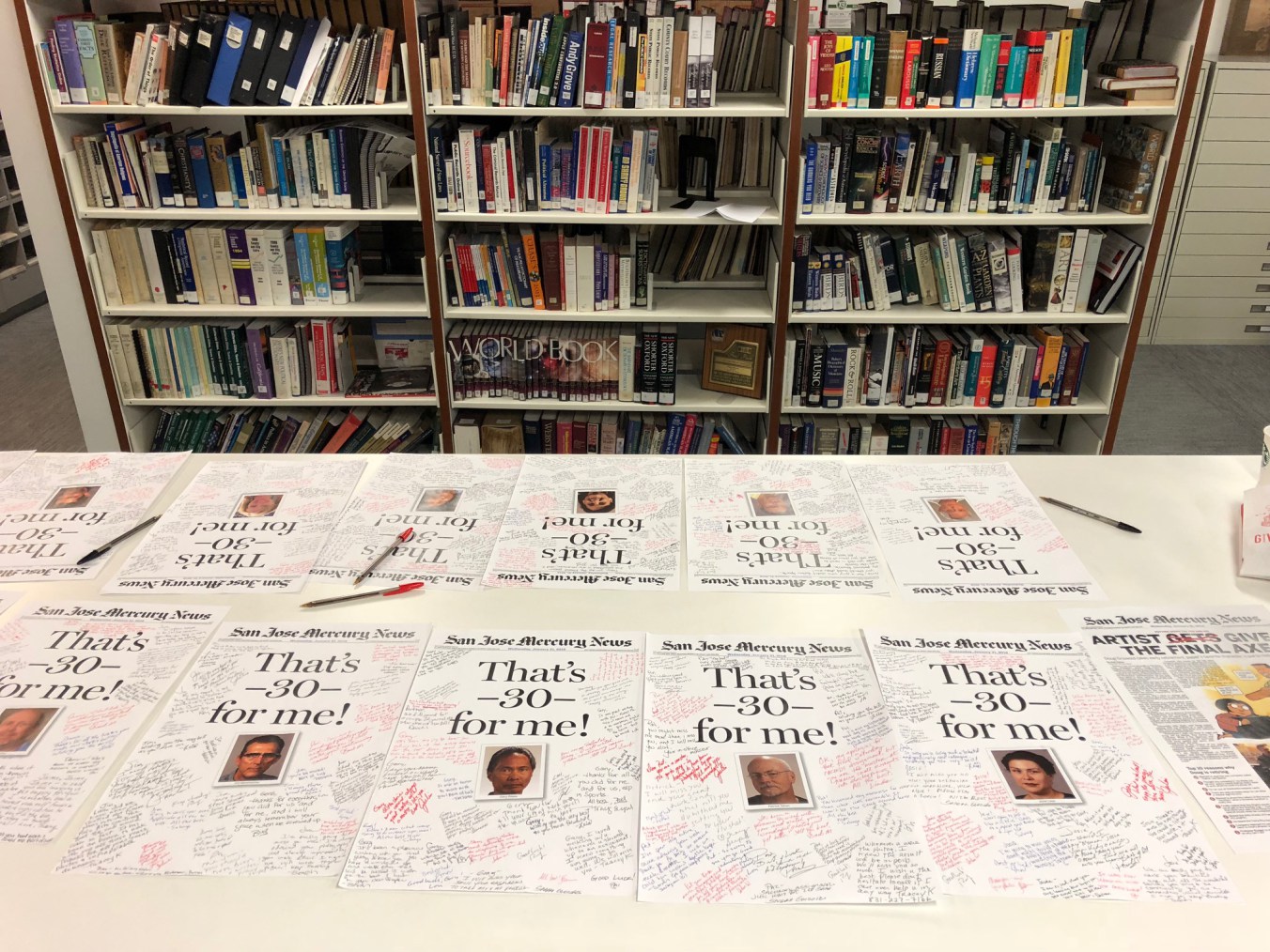 UPDATE: Total buyouts in San Jose this week now stand at 15, at least 9 of whom are NewsGuild-represented, bringing total job losses for the Bay Area News Group this week to at least 27.

Feb. 2, 2018 – Recent company-wide layoffs at Digital First Media newspapers are part of a calculated strategy to extract maximum profits in the next two to three years before shutting down or selling the chain, a prominent news business analyst said Wednesday.

On Wednesday, DFM announced the buyouts of 21 news workers at its San Francisco Bay Area newspapers, the East Bay Times and the San Jose Mercury News. These followed layoffs and buyouts around the country.

Dispelling rumors that the chain might be gearing up to sell now, Doctor said the company remains quite profitable as long as staff and resources continue to be slashed.

At this rate, he said, Alden executives believe they can continue to extract substantial profits for two and a half to three years at the most.

“There is no long-term strategy other than milking and continuing to cut,” Doctor said. “Their view is that in 2021, they’ll deal with that then. Whatever remnants are there, they’ll try to find a buyer.”

Asked how DFM’s local newsrooms can hold on to readers under such dire conditions, Doctor said the final product is not Alden’s concern. Part of the company’s strategy, he said, is to raise subscription prices, counting on a “lag time” before loyal customers cancel their subscriptions due to diminished content.

“They keep ratcheting up the price for the die-hard subscribers,” Doctor said. “Everybody talks about the demise of the (local) paper. But Alden has been able to track it, and there’s a lag time. It takes people a while to cancel. As people drop the paper, in the meantime they’re maintaining or growing their profits.”

Papers in communities from Trenton to San Jose are feeling the hit to already bare-bones news operations.

In New Jersey, the Trentonian lost its lone remaining photographer, who was a long-time employee at the paper. At the nearby Delaware County Times, one reporter was laid off, while one buyout was approved at the Norristown (Pennsylvania) Times Herald.

Alden has been able to track the lag time. It takes people a while to cancel —
as they drop the paper, Alden is maintaining or growing its profits.

Management jobs have also been eliminated at some DFM papers, including the St. Paul Pioneer Press. The Denver Post saw the abrupt resignation of its publisher Mac Tully this month as ever more positions are targeted for buyouts or layoffs.

The Monterey Herald, which a few years ago had 12 city-side reporters on staff, was down to just two last week while two reporters were out on leave. The two working reporters are now responsible for covering more than six cities and a county of 450,000.

The DFM cuts go far beyond what other American newspapers are experiencing. Two years ago, unionized DFM workers reached a historic agreement to raise pay at 12 newspapers for the first time in a decade. But since launching that campaign in 2016, NewsGuild-represented payroll at those 12 papers has been cut by 40 percent, from 975 to 585. That reduction was before the current round of buyouts and layoffs.

During those two years, DFM laid off workers at twice the rate of other national newspaper chains. It has also sold off all its papers’ real estate assets with no reinvestment in the local news entities it controls.

Doctor, who spent a long editorial career at the Knight Ridder newspapers, said that chain once “balanced mission and profits. This company makes it easy, because there’s nothing to balance. Their only concern is profits.”

Whether DFM newspapers can last the expected three years will depend on several factors, including the California economy. “More than half their revenue is based in California,” Doctor said.

In a statement about the Southern California layoffs, Stephanie Bluestein, president of the Greater Los Angeles chapter of the Society of Professional Journalists, said, “Even before these layoffs, (the papers’) coverage had been reduced significantly. After this latest round of cuts, we fear they will be forced to scale back even further, eliminating much-needed coverage of their elected representatives and local government agencies.”

She added that the layoffs “should be a cause for alarm for anyone who values our civic culture.”