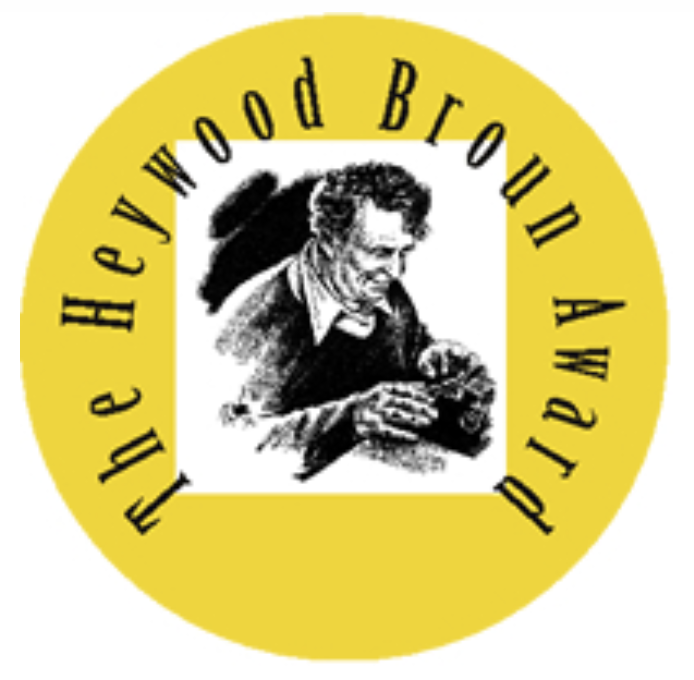 Heywood Broun was a crusading columnist for the Tribune and The World in New York from 1912 until his death in 1939. He also wrote frequently for The Nation and The New Republic, as well as Harper’s, Bookman, American Mercury and Collier’s. He founded the American Newspaper Guild in 1933 and served as its first president.

Although his first love was sports, Broun is best remembered for his reporting on social issues and his passionate championing of the underdog and the disadvantaged. “When a man has a conviction, great or small, about eggs or eternity, he must wear it always in plain sight, pulled down tight upon his forehead” he once wrote. “I see no wisdom in saving up punches for a rainy day.”

Broun maintained a steadfast belief that journalists could help right wrongs, especially social ills. “I am a little sick and tired of being classed as soft, bourgeois and sentimental if I say that human brotherhood could solve overnight the problems concerning which men shake their heads and say, ‘too bad but insurmountable,’” he wrote in 1933. And in 1939, just a month before his death, he wrote: “I would like to see some columnists do the side streets and the suburbs and chronicle the joys and tragedies of the ordinary run of people.”

This annual competition is intended to encourage and recognize individual journalistic achievement by members of the working media, particularly if it helps right a wrong or correct an injustice. First consideration will be given to entries on behalf of individuals or teams of no more than two. This, too, is in the spirit of Broun.

Deadline: Entries must be postmarked no later than Jan. 26, 2018. Faxed and emailed entries will not be accepted.

Publication Dates: The award will be given for work published or broadcast between Jan. 1 and Dec. 31, 2017.

Eligibility: Journalists working on behalf of non-student mass media in the United States, Canada and Puerto Rico are eligible, whether Guild members or not; student journalists should see the Barr Award. Publishers and other employers, or entries on behalf of an entire staff of a publication or employer, are not eligible; neither are entries written or reported by managers. Entries may be submitted by applicants for themselves or by others; however, entrants should note that the judges frown on obviously mass-produced contest entries.

Notice: All entries become property of the award committee. There is no official entry form, nor is there an entry fee.

Submission: For newspaper or magazine entries, please submit six complete copies of all work to be evaluated; clean photocopies are acceptable; original tearsheets are not required. Online entries should be submitted as print-outs. For broadcast entries, submit copies on six USBs, paired with a final script and summary, as further described below. All entries, print or broadcast, must include:

Entries that do not conform to these requirements will not be judged.