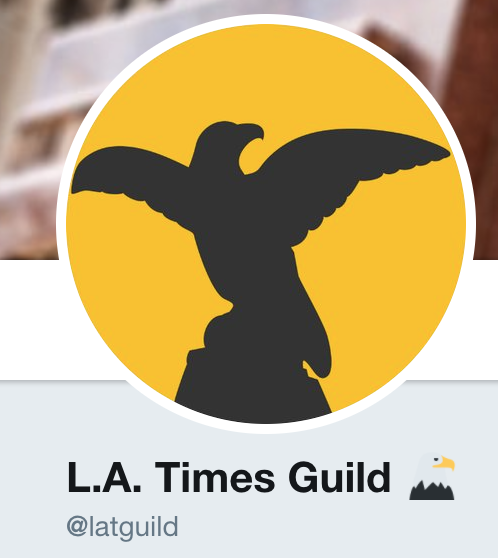 Dec. 4, 2017 – Employees of the L.A. Times filed for an election with the National Labor Relations Board to unionize their newsroom on Dec. 4, declaring, “It’s a big day here!”

In a letter to their colleagues, the Los Angeles Times Guild Organizing Committee wrote: “This morning we’re taking the next step toward forming a union.”

“We look forward to working with each of you to safeguard the future of the Los Angeles Times and its newsroom.”

In a tweet posted soon after the announcement, the committee noted that the filing date has special significance. “Today is the anniversary of the first edition of the Los Angeles Times, published Dec. 4, 1881. Our journalists have had no union representation for 136 years,” they pointed out. “That is going to change.”

Matt Pearce, a member of the Organizing Committee who is a national correspondent for the paper, tweeted, “Thousands of journalists have dedicated their lives to this newspaper and this community over the years, and a few have even died for it. We have a legacy to uphold and protect. And we want our newsroom, for the first time, to decide for itself what it wants.”

Tony Barboza, a committee member, who covers air quality and the environment, called it “a remarkable step at a paper with a long history of anti-union publishers.”

Other employees also spread the news, and a reader soon weighed in with a message of support. “I am a subscriber of 10+ years and I wholeheartedly support the @latguild,” wrote Candice Kim.

“Today is the start of the L.A. Times newsroom taking its fate in its own hands,” said NewsGuild President Bernie Lunzer.  “Journalists make the Times the valuable institution it is, and a strong, democratic workplace will ensure their voice is heard in the decisions that determine the publication’s future. Let the staff of the L.A. Times be an example: It’s time for all journalists to have a seat at the table.”

Since the Organizing Committee announced the union drive on Oct. 4, newsroom employees have been building support for their campaign, responding to anti-union messages from management, and exposing the private jets, “golden parachutes” and 80 percent raises executives at the paper enjoy.

The editorial staff also requested voluntary recognition from management on Dec. 4, but they have yet to receive a response from Tronc, the Times’ parent company.

Anthony Pesce, a data journalist and member of the union’s Organizing Committee, said, “We’re excited to take this step toward securing representation by the Guild and ensuring a seat at the table for our newsroom. We’re asking management to voluntarily recognize our union so we can begin the collective bargaining process, but we’ve filed for an NLRB election to prevent any further delay. We’re prepared to pull our election petition once management makes the decision to recognize our union.”

The NLRB vote is expected next month.