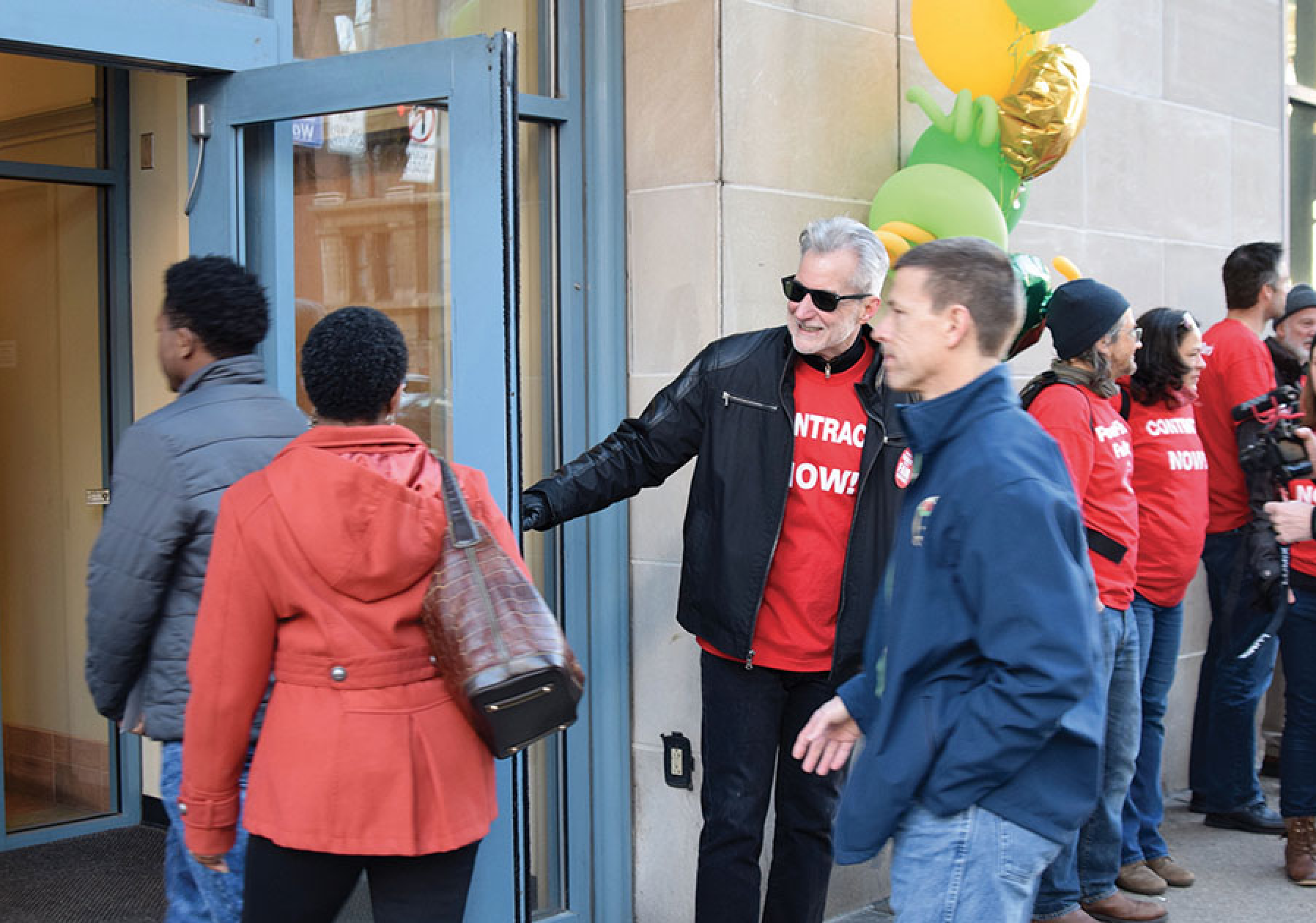 Aug. 31, 2017 – More than 13 years after they began their quest for a union contract, full-time faculty at Point Park University in downtown Pittsburgh ratified an agreement by a vote of 96 to 6 on Aug. 28.

By all accounts, the result was worth the years of struggle. The full-time faculty won major improvements and built a solid foundation for the future.

Raises for full professors began at just under 16 percent, with some receiving significantly more, said Michael A. Fuoco, president of The Newspaper Guild of Pittsburgh, which represents the full-time faculty. The agreement established minimum compensation levels for each academic rank; all full-time faculty may be paid more – and many will – but they cannot be paid less.

Lecturers, at the lower end of the pay scale, went from earning $25,000 per year, which Fuoco called “poverty wages,” to a minimum of $41,000 in the first year of the contract. That’s a 64 percent increase.

Reaction to the contract among the 138 full-time faculty members was overwhelmingly positive, Fuoco said.

“This has changed my life,” one of the lecturers told him after learning the details of the agreement.

The agreement also marked, in a practical sense, the university’s acceptance of the faculty’s decision to unionize.

What took so long?

After the staff voted in 2004 vote to join the Pittsburgh Newspaper Guild, the university challenged their right to unionize, citing as precedence a ruling regarding Yeshiva University, which prevented staff from forming a union because they acted as managers, making decisions about hiring and firing as well as financial matters.

“In no way did the [Point Park] faculty have any say in how the university was operating,” Fuoco said.

The university appealed the faculty’s vote to unionize “through every possible means, from the local NLRB board to the national to the circuit courts, back to Pittsburgh, back to the national. Every step of the way we won, as well we should have,” he said.

The university finally withdrew its challenge to the union’s right to represent the faculty in 2015, after the NLRB rejected Pacific Lutheran University’s claims that its faculty acted in a managerial capacity.

But progress on contract talks was still slow. Negotiations didn’t begin in earnest until March 2016.

With this year’s classes set to begin on Aug. 28, the administration finally moved, Fuoco said.

The agreement has done a lot to repair the relationship between the university administration and the faculty, he said. “Our faculty now knows that their work is being respected.”

“This contract, the first ever for full-time faculty, is a really solid, solid foundation for gains in the future. We made tremendous gains now, but this gives us something to build on,” Fuoco said.

“We ended up with a historic document and we look forward to creating more history to benefit the hard-work, teaching, service and scholarship of the 138 members of the faculty who are members of The Pittsburgh Newspaper Guild.” The local, founded in 1934, also represents about 150 editorial employees at the Pittsburgh Post-Gazette.

Fuoco said awareness and support from students was essential.

“Of course, our professors should be compensated for the work they put in,” the editorial board of the student newspaper, the Globe, wrote on Sept. 13, 2016. “Their wages should be comparable to other similarly-sized private universities, so the best professors we have won’t want to leave for a higher pay grade.”

“The Labor Day Parade winds through our campus every year” the board wrote. “It’s only appropriate that our campus becomes an example of organized labor.”

When the university finally dropped its NLRB appeals and agreed to open talks with the faculty, student journalist Margaret Davis wrote, “I was 10 years old when the legal battle began. Twelve years is a long time.”

The Globe covered the faculty’s protests, writing about their sticker campaign and a T-shirt protest on the day prospective students visited campus.

Josh Croup, the Globe’s editor-in-chief, said students were happy that the dispute is no longer lingering over the university. “A lot of the students were pulling for them,” he said, although the Globe “tried to be as fair as possible.”

“It was cool to see the faculty united,” he said, “and watching that support and the unification of the faculty grow over the last year… As the school year progressed you started seeing the signs everywhere and the stickers. Some students may not have recognized that, but it was nice to see them uniting for one cause and all pulling together around a common goal.

“We’re certainly happy that they’re happy and we can all go back to our normal days here at the university.”

In addition to the raises, the teaching staff also won other significant improvements, including a guarantee of academic freedom, expansion of their intellectual property rights, and more options for replacing some of their course load with extracurricular activities, such as advising a club.

The union also negotiated a system for appointment renewals, a grievance-arbitration procedure and due-process protections, Fuoco said. In addition, they won a reduction in health insurance premiums and a modest increase in retirement benefits.

NewsGuild-CWA President Bernie Lunzer praised Fuoco and Joe Pass, the local’s attorney, and the Point Park faculty for their tenacity. “Their struggle gave new meaning to the word ‘persistence,’” he said.