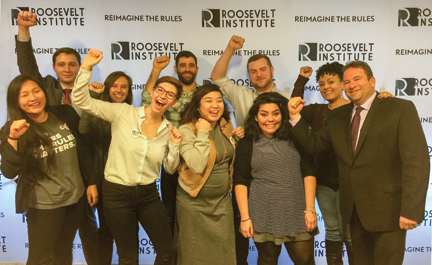 Once the employer recognizes the employees will be members of The NewsGuild, there is a process to legally negotiate about work rules and standards.

Choosing a union allows employees to negotiate as a group to create a better workplace. Once the employer recognizes the employees will be members of The NewsGuild, there is a process to legally negotiate about work rules and standards, what is know as terms and conditions of employment. Even without a union, the law allows individual employees a right to negotiate their terms and conditions of employment.

Since it’s inception during the depths of the Depression in the 1930s, the NewsGuild has a history of setting the standards for media employees. Many of the industry standards for employees were copied from contracts The NewsGuild had with publishers in the United States, Puerto Rico and Canada. The law provides that employees who are not managers or supervisors can work together to negotiate rules that apply equally and fairly to all employees. And The NewsGuild has a track record of success for improving the very standards that make the workplace more welcoming and stable. The process in The NewsGuild and other unions is known as Collective Bargaining.

Collective Bargaining is an umbrella term that covers an ongoing relationship between The NewsGuild and your employer. Collective Bargaining is a lot of work for the union members. Why? Because Collective Bargaining means negotiating with your employer those terms and conditions that will govern the parties during an agreement. Since 1982, The NewsGuild has a three-day training program to help newly elected officers understand their role and responsibility in ensuring the union represents the will of the members. The ultimate message is that Collective Bargaining goes on 365 days a year, led by the officers who represent the membership. The responsibilities include ensuring that managers, supervisors and editors understand the agreements reached with the company during the negotiations for a contract.

The NewsGuild has a history of great success in improving the standards for employees.

Just as a CEO, the editor, and many other executives can negotiate a legally binding contract, so, too, can employees. And, as a CEO will pay an attorney for attaining a legal contract, dues and fees are pooled to support negotiating an agreement with your employer. The NewsGuild has a history of great success in improving the standards for employees. Those improvements meant more than just improving the rules for the workplace. It also provided income security by negotiating rules about treating employees fairly and equally.

Over an 80-year history, members, elected officers and staff have met annually to create the bargaining priorities for employees to use in negotiations. The Bargaining Priorities are an ever-changing document as determined by those elected from locals in the United States, Puerto Rico, and Canada. The priorities for your workplace will be set by a committee from your workplace. Assistance from a professional negotiator is made available for all NewsGuild workplaces.

The Collective Bargaining Program has also developed from those same annual conventions and sector conferences. It is a guide for locals and the committees that represent the membership in negotiations with employers. The Collective Bargaining Program provide the tools necessary to maximize the knowledge of the committee that negotiates with the employer. It also, just as importantly, provides for making sure the employer abides by all agreements made in an agreement. And, that is why bargaining goes on 365 days a year.

The NewsGuild-CWA has over 200 Collective Bargaining Agreements.