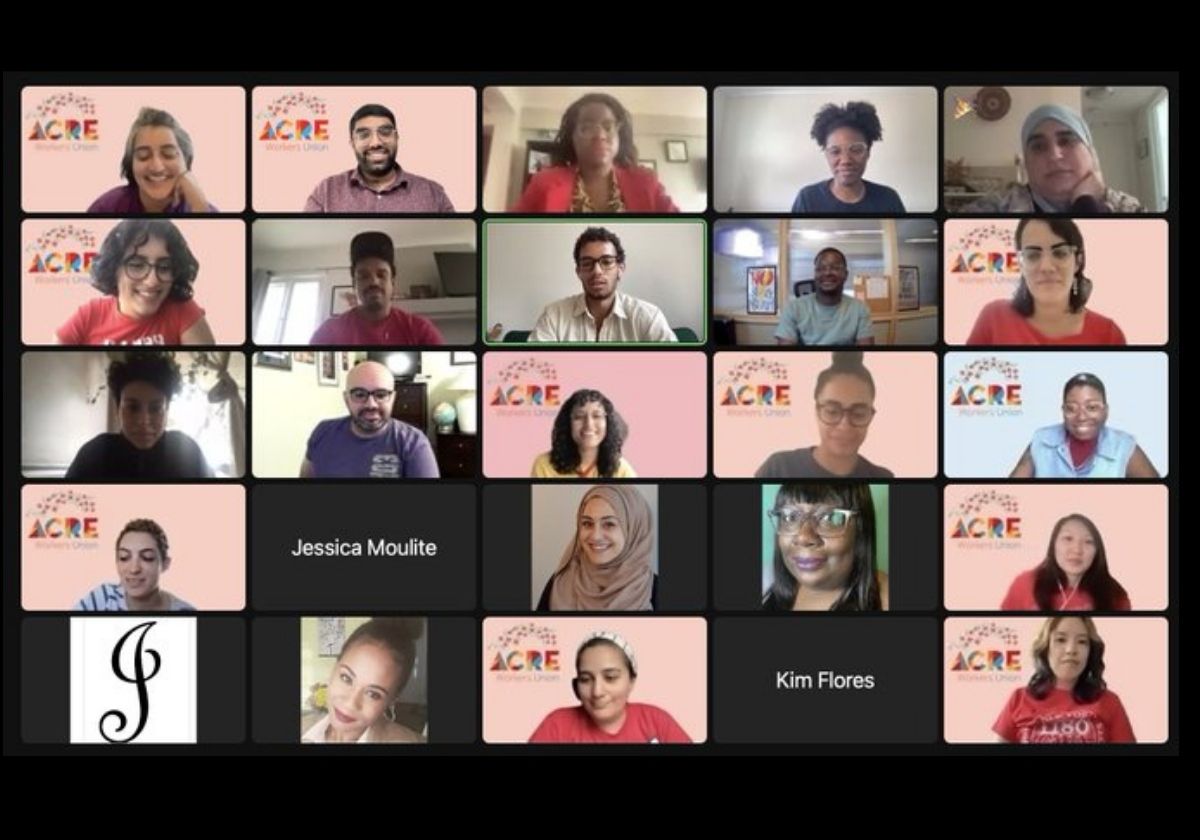 Great news! Journalists at The Hill announced last week that they are unionizing! A supermajority of the roughly 80 reporters, designers, copy editors, producers and social media curators have signed cards in support of the effort. They will join the Washington-Baltimore News Guild Local 32035.

“The past few months have been challenging for our outlet and its newsroom staff as we contend with a change in ownership,” they said. “During a tumultuous time for news media in general, ensuring that workers can feel secure about their employment and benefits is crucial to fostering a newsroom that produces the best journalism it can.”

They are fighting for access to affordable health care, opportunities for professional growth and to create a more diverse and inclusive workplace.

Staffers at ACRE (Action Center on Race & the Economy) announced Monday that they are unionizing with the Chicago News Guild Local 34071. The nonprofit organization serves as “a campaign hub for organizations working at the intersection of racial justice and Wall Street accountability.”

The organizers, researchers and administrative workers’ concerns include pay equity issues and evaluation procedures that are punitive and applied inconsistently.

“Our union will work toward an ACRE where staff are fully resourced to perform our work to support the movement and our communities, develop professionally, and care for ourselves as whole people. We deeply care about ACRE and are ready to put in the work to make it the organization we dream for it to be.” Welcome!

The Chicago Reader completed its formal transition to a nonprofit publication last week — a stunning victory that workers, readers and artists made happen. It was the culmination of an intense, two-year effort. When the co-owner obstructed the plans in December, workers organized, mobilized support throughout the community, rallied, protested, and forced him to back down.

Workers at the iconic, free alt-weekly have challenges ahead, but what a great accomplishment this is!

After a long organizing journey, workers at the Daily Kos won certification of their union on Wednesday. “What has been really gratifying is realizing that we have an exceptionally talented workforce,” said Catherine Daligga, who works on the product team from her home in Michigan. “It’s been a real privilege to get to know people through this process.

“That’s one of the most fun and uplifting aspects of union organizing,” she said.

April Siese said she “wasn’t there for the initial rumblings” of union organizing, but she’s “a huge union supporter.” A lot of policies are informal and depend on who your manager is, she said. “That’s what makes it so important to unionize.”

Daligga said the next step is to “make sure all unit members are acquainted with and empowered to participate in creating contract priorities.”

The Chronicle journalists formed the Yellowstone News Guild in March to address inadequate pay and other benefits. “Today’s unanimous vote is the result of a shared hope among guild members that unionizing and collective bargaining will bring us better pay and benefits,” members of the organizing committee said. “We call on Adams to come to the bargaining table in good faith.”

Major news from the FCC on Friday: they granted our request to delay the deadline for opposing a mega merger of news companies. This rarely happens, yet the FCC gave us another month to oppose the proposed takeover of TEGNA by two hedge funds. A merger would raise consumer prices and cut local news jobs. We cannot continue to lose local news jobs, which are already down 28% from 2008.

We also asked the FCC to require the hedge funds, Apollo Global Management and Standard General, to provide additional information about their plans. We made the requests two weeks ago, along with Common Cause and Public Knowledge.

The additional information from Apollo Global Management and Standard General is necessary “for the Commission and the public to meaningfully assess whether the proposed transactions are in the public interest,” we said, citing the complex nature of the proposed transaction, the potential for price increases for consumers, and the likelihood of additional newsroom layoffs.

Private equity funds — including Apollo — have systematically bought up news companies, loaded them with debt and laid off journalists. We’ve got to continue to fight against the consolidation of news organizations. These funds are destroying civic life and hurting our readers’ ability to participate in our democracy. Remember, Apollo helped finance the merger of Gannett and Gatehouse in 2019.

Members of the Washington State NewsGuild were insulted by management’s response to their wage proposals for journalists at four McClatchy-owned publications.

After almost a year of bargaining, management negotiators are proposing pay scales $20,000-$30,000 below the median household incomes of the communities they cover. They’re also proposing to continue a two-tiered system where workers at Bellingham and Tri-City are paid less than those at the News Tribune and Olympian.

Union members are asking supporters to sign their petition telling McClatchy to commit to fair wages.

Members of the California Federation of Interpreters Local 39000 are locked in a battle with San Francisco Bay Area court administrators, who are refusing to negotiate livable wages after more than a year of bargaining. At the same time, the courts have been paying contractors more than $1,000 per day to provide interpreting services to victims, defendants, witnesses and other people with business before the judiciary.

The workers have been walking out and need support. They’ve set up a GoFundMe account to support the walkouts and win a contract. Please support their fight if you can.

Staffers at Planned Parenthood PA Advocates ratified their first contract on May 12, a little more than a year after they won voluntary recognition of PPPA Union. Among other benefits, the collective bargaining agreement reclassifies union members as hourly employees, making them eligible for overtime pay when they work more than 40 hours per week. The workers are part of the NewsGuild of Greater Philadelphia Local 38010.

Nearby and in the same local, the journalists of Delaware Online and Delaware News Journal ratified their first collective bargaining agreement with Gannett.

Workers at the Sioux City Journal also negotiated a new contract, which includes diversity measures such as the Rooney Rule, to ensure that women, members of traditionally underrepresented groups and local applicants are interviewed for open positions.

Congrats to all the workers under contract!

Members of the Canadian Media Guild are petitioning the Canadian Broadcasting Corporation and Radio Canada for extra compensation and recognition for “union members who came into the workplace throughout the pandemic, who put their safety on the line by working in public settings, and who must dramatically disrupt their lives once again, and relocate to the office.”

They have repeatedly asked the CBC to recognize their work and sacrifice, but CBC has rejected their requests. Management is also refusing to consider an all-staff pay increase that might compensate workers for high inflation and the costs union members incurred during the pandemic.

The NewsGuild Side-by-Side Program is ramping up for round 2 with activities set to begin on June 6. The program provides national and local Guild staff the opportunity to see each other in action, learn from each other, and reflect on their work. The peer-observer model, advocated by CWA, has shown to be an effective model of collaborative staff development.
Learn more and register here.

Guild members made news last week — here are stories about the work we’ve been doing.

Photo at top: Organizers, researchers and administrative workers at ACRE (Action Center on Race and the Economy) are organizing.